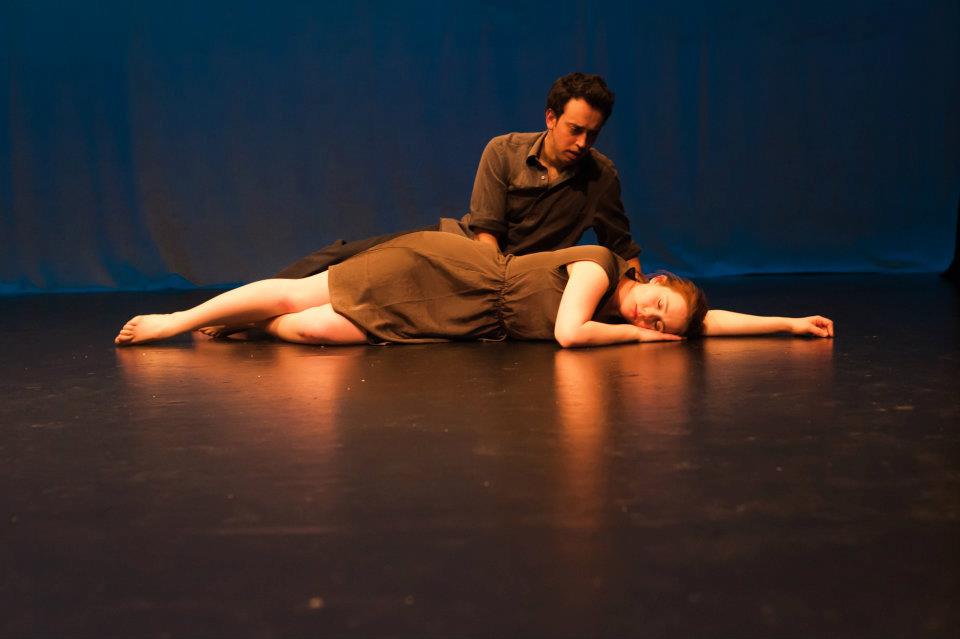 Seven barefoot actors, a chair, an accordion, and one hell of a story. That’s Ballad of the Pale Fisherman. This much-loved show, birthed at the Minnesota Fringe Festival, was a well-deserved hit in 2010. It was very exciting to hear that it was coming back, expanded and improved as an offering in Illusion Theater’s Lights Up series. How do you improve on something that was already great? Very carefully.

But that’s how writer/director Isabel Nelson and her hardy ensemble of actors do their work – with careful precision. Because they are all they’ve got. There’s no set, no props, no elaborate costume plot. The one nod to modern theatrical magic is the wonderfully evocative lighting design of Michael Wangen. Ballad of the Pale Fisherman is a reminder that, despite all the many things you can do in theater these days, limited only by your budget, there isn’t a lot that you *need* to make great theater.

Just seven barefoot actors, a chair, an accordion, and one hell of a story.

“What else do you want that you can’t have here?”
“Clean hands. Girls.”

Peter (Diogo Lopes) grows up in an island community whose primary occupation is fishing. While Peter’s buddy Owen (Willie Gambucci) longs to leave the island behind for the more expansive life of the mainland, Peter is happy with his simple life, if just a little bit lonely. The community around Peter (brought to life by Gambucci, Heather Bunch, Adelin Phelps and Alison Witham) is a warm and quirky bunch, but the options for female companionship are limited. Until one night when Peter accidentally catches a selkie in his fishing nets.

“He had grown accustomed to the emptiness of that house.”

A selkie is a seal who can transform itself into a beautiful woman. Selkies can also transform back again into seals and escape into the sea—unless they lose their seal skin. Without their seal skin, the selkie cannot return home to the water. Peter’s selkie, who he calls Anna (Anna Reichert), is a seal-woman in such a predicament. Peter takes Anna to his home on the island temporarily, vowing to keep searching with his nets for her seal skin so she can go back to her watery home again.

“The first new thing in their lives had happened.”

A shy, awkward friendship develops between Peter and Anna, which eventually blossoms into love, and they build a life together. Then the seal skin is found, and Anna discovers she is pregnant. Can the two different worlds of Peter and Anna coexist peacefully, or ultimately are they just too different to make it work?

The ensemble when not playing characters continually returns to being the motions of the waves and the sound of the wind. The sea is ever-present. The gulls, the seals, the fish flopping on the deck, the rocks, the church, the pounding of the surf, the cry of a baby, the creak of a trunk as it opens and closes, the keening wail of something yearning, of someone in pain. Presiding over it all is the unnamed narrator (Derek Lee Miller) with that accordion in his lap—an accordion whose bellows often take on the sound of the wind or the breathe of life. The accordion also provides a musical score—both spritely and melancholy. This is the narrator’s story in more ways than one, but you’ll need to wait until the end to find out exactly how. One of the strengths of this production is the things it doesn’t say, the silences that say more than words. The production presents the pieces of the puzzle and assumes the audience can put them together for itself. It’s a wonderful storytelling conceit that fully engages the audience’s imagination, giving the story that much more power.

“Are you all fishermen here?”
“The ones that stayed.”

Everyone in the cast is great without exception but I’d be remiss if I didn’t call out Reichert and Lopes as Anna and Peter. Their pair of unlikely lovers is an adorable creation, two strong but fragile creatures you can’t help rooting for, holding your breath sometimes that they’ll find a way to stay together. And Bunch, Phelps and Witham provide a hearty helping of comic relief as a group of old women who fix the fishermen’s nets. This trio of ladies can’t help meddling in the affairs of others, but they’re so well-intentioned, you can’t help but like them. They’re the backbone of the community. They’ve lived long enough to see everything, but rather than close their minds against the new and different, it opens them up to the constant wonder of life—in all its forms. In fact, given a couple of cues in this newly expanded version, I think one of the ladies might just be a selkie herself.

“She had the sea in her eyes.”

After creating back to back Fringe hits two years running (the original Ballad of the Pale Fisherman in 2010, and the equally fantastic Red Resurrected in 2011), Isabel Nelson and co-founder and co-artistic director Diogo Lopes have given their ensemble a name: Transatlantic Love Affair. The reason this makes me giddy is that a theater group with a name implies a commitment to create more work in this style, with these kinds of artists. And we need more of this kind of theater.

“We, who are left behind… look out to the water, and we don’t know why.”