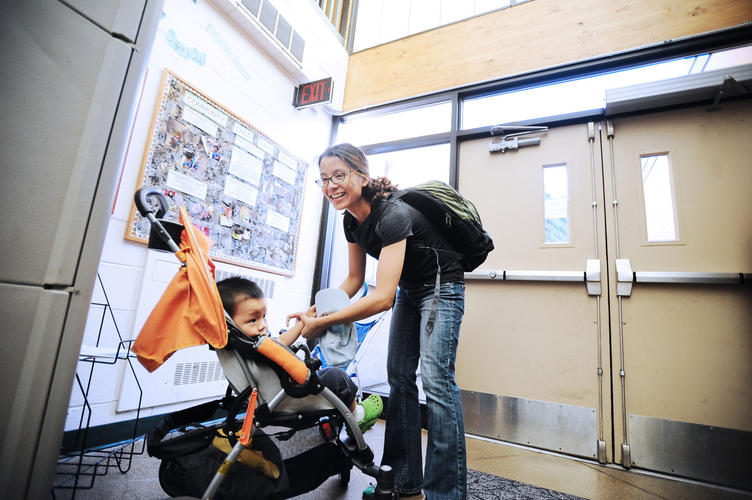 His son was born two years ago, in the midst of Lindberg’s doctorate program. When classes started in the fall, he told his students he would be sleep deprived that semester — not just needing to catch up, he said, but nearly hallucinating.

Though that anxiety has passed, new ones have emerged in its place. His wife planned to begin working after the first year, but has been unable to find work. This means they are living on Lindberg’s graduate teaching salary — no more than $15,000 per year.

“For us, it’s kind of holding back the sea with a broom,” he said.

In the U.S., debates on the balance between work and family are in full swing. At the same time, national policies regarding parenthood continue to lag behind those of other industrialized nations.

The University of Minnesota’s policies are in line with national standards, and are among the more generous policies in the Big Ten. But students, faculty and staff continue to struggle with financial concerns, limited resources and striking a viable balance.

Zenzele Isoke, an assistant professor in the gender, women and sexuality studies department, knows this experience well. Her two daughters, now ages 12 and 9, were born while she was a graduate student.

A major issue for young parents — specifically mothers who choose to have children before their career is fully developed — is the lack of societal support, Isoke said.

Isoke took a year off after her first pregnancy but made arrangements to continue her coursework during her leave. Afterward, she returned to a full-time course load.

That year was the most challenging, she said, because she was taking classes, teaching and parenting all at once. She was far away from her family, and none of her friends were having children, choosing instead to put off parenthood until they had established a career.

According to the U.S. Department of Health and Human Services, the average age for women having their first child increased 3.6 years between 1970 and 2006. Birth rates are highest for women between the ages of 25 and 29, and more women are now having children in their 40s.

Isoke said being the only mother among her friends left her “isolated.”

“I never felt comfortable asking my friends to babysit for me,” she said. “I just never did.”

Although assistance is available for low-income families, finding child care that is affordable as well as safe and convenient can be a challenge.

While Isoke was pursuing her doctorate, her partner had a full-time job and was able to pay child care and other major bills.

With child care alone costing between $800 and $1,000 each month, financial worries “caused a tremendous strain on the relationship,” she said.

The costs associated with having children are more difficult to manage than the balance between work and parenting, she said, and it ultimately “takes a big toll on the standard of living.”

This type of financial strain is a primary source of stress for Lindberg and his family. Between health care, child care and rent costs, Lindberg said they have “negative money.”

“You do it by drowning in debt,” he said.

Ann Edgerton, director of the University of Minnesota Child Development Center — which provides child care to University families — said those who struggle to meet the center’s tuition are encouraged to seek assistance from the county.

Zhen Wang, a political science doctoral candidate, said meeting her son’s child care costs requires the use of their savings and help from family members.

Wang’s son, Daniel, is enrolled full-time at the Community Child Care Center on the University’s St. Paul campus. She and her husband are both looking for work — he recently finished graduate school, and she will complete her program in May.

Her advice, she said, would be to wait to have children until after finishing school. Though it’s possible to manage the balance, she said, it’s not easy. 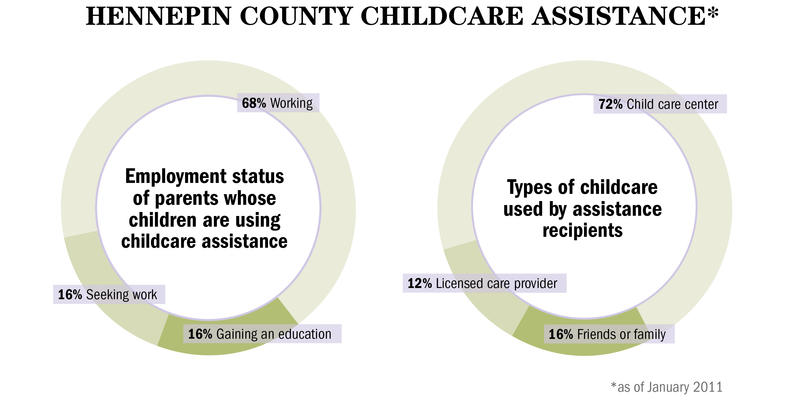 The University offers a number of resources for faculty, staff and students with families, including child care and housing.

But while some say there is not enough supply to meet the demand, others argue that providing those resources should not be the University’s main focus.

Lindberg and his family were fortunate, he said, to get a place in the St. Paul campus’s Commonwealth Terrace Cooperative. CTC provides housing for University students with families of their own.

The Community Child Care Center is coordinate to CTC. The center is a nonprofit organization funded through weekly tuition rates, University student fees and outside grants.

Tuition costs are calculated on a sliding scale based on household size and income. This fall, all families will see a 4 percent tuition increase, said assistant director Angela Fredrickson. Tuition was increased 5 percent last year and 3 percent the year before, she said. Prior to that, it had not been increased since 2004.

The number of grants for which the center is eligible has decreased in recent years, Fredrickson said, making it necessary to seek funding from other sources.

Another option for University families is the University of Minnesota Child Development Center. The center, which is part of the College of Education and Human Development, provides research and training opportunities for University students as well as child care.

UMCDC’s waiting list is in the hundreds, with a wait time stretching up to 18 months, said Edgerton. Families are encouraged to apply at the end of the first trimester.

There is a need for more child care on campus, Fredrickson said. CCC’s waiting list is not as long as that of the Child Development Center, but there is demand for increased services, including infant care — something the center does not have the space to provide.

Edgerton said the discussion of whether to expand child care resources on campus has been prevalent throughout her time at the University.

“Here’s the problem: You have to decide what your mission is,” she said, adding “the University isn’t in the business of child care.”

Though University staff is eligible for campus resources, some say the biggest benefit they receive is flexibility within their departments.

Jamee Yung, museum educator at the Weisman Art Museum, said the nature of her job makes it possible to balance work and family.

As a University staff member, Yung was eligible for two weeks of paid leave. To that, she was able to add vacation and sick leave for a total of up to 12 weeks.

This is typical for staff members; what is not typical is the museum allows additional unpaid leave, for a total of up to 6 months. Yung was able to do this after both of her pregnancies and also worked at 80 percent time during her first year back at work.

Her two daughters attend child care three days per week at a center near their home, which costs about $800 per week, Yung said.

Though she and her husband did initially consider University child care, the long waiting list made it necessary to look elsewhere.

Terri Sutton, the communications associate in the University’s English department, has also has found a similar level of understanding in her position.

Her son, now 10, was adopted from China at 15 months. She was working as a freelance journalist at the time, and she and her husband saved enough money to stay home for the first six months.

Returning to work was a good thing, Sutton said.

“Women who are mothers don’t have to be ashamed to enjoy their work,” she said, “so I had a great time freelancing at that point and came back to [my son] with renewed energy.”

Having six months of parental leave is uncommon — especially because the U.S. is the only industrialized nation without laws requiring paid maternity leave.

In its annual State of the World’s Mothers report, released this May, Save the Children created a ranking of “The Best and Worst Places to Be a Mom.” The U.S. currently ranks 25th.

This ranking can be attributed to a number of factors — among them, low levels of preschool enrollment and relatively short maternity leave.

Women in the U.S. typically receive 12 weeks of unpaid maternity leave, compared to the 15 or 20 paid weeks provided in other countries. Some nations, including Norway, Sweden and the United Kingdom offer more than 30 weeks of paid leave.

Mary Beth Powers, director of Save the Children’s Newborn and Child Survival Campaign, said there may be a correlation between the number of women elected to national legislatures and the societal value placed on motherhood.

“I wouldn’t say women seem less empowered here, per say — it’s more that we just have to work twice as hard to hold everything together,” she said.

At the University, faculty, with the exception of those at the Duluth campus, and professional and administrative employees typically receive more paid parental leave than Civil Service and Bargaining Unit employees, who may get additional benefits through their union.

Leave for faculty and P&A employees is six paid weeks for biological mothers and a total of six weeks — two paid and four unpaid — for biological fathers.

Leave for Civil Service and Bargaining Unit employees is two paid weeks, with up to 20 days of additional accumulated sick leave for biological mothers.

For faculty or P&A employees who are adoptive parents, the situation differs. Leave given by the University amounts to two weeks paid leave and four weeks unpaid leave.

Sutton said she thinks leave for adoptive and biological parents should be exactly the same.

“You don’t have the healing from any kind of biological birth,” she said, “but you are definitely doing important work around getting to know and attaching to your child.” 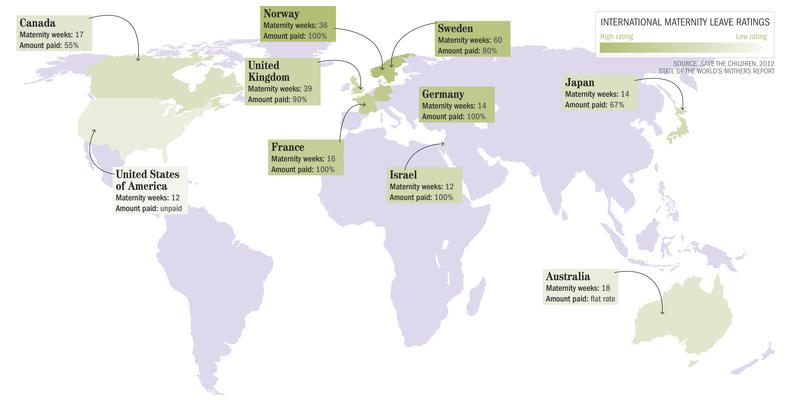 (Click here for a larger version of this map)

Academia is a good place to work and raise children because it offers a certain amount of flexibility, said Zenzele Isoke. But balancing work and home also means creating a boundary between the two.

Unlike professors who don’t have children, Isoke doesn’t have the “luxury” of working beyond typical working hours, she said, and it forces her to be very task-oriented.

“I have a very long to-do list, and I try to get through it every day,” she said. “That’s how I function.”

At times, moving across the boundary between work and home can be difficult. Academic work requires a very different thought process than parenting, she said, and switching roles isn’t always easy.

Lindberg faces a similar struggle but one that arises from the anxieties of providing for a family as much as from the balance itself. That anxiety can make it difficult to do his academic work because of the concentration and effort it requires.

Like Isoke, Lindberg said the work day is often not enough time to finish everything that needs to be done. But for both of them, spending time with their families is a conscious priority.

“Does it come down to choice? To some extent, yeah,” Lindberg said. “I choose to be sure that I’m spending time with my family each day.”

Ultimately, it is important to be comfortable with your choice, whatever it may be, said Powers.