I came to the United States when I was 11 years old.

Crossing the border was not easy. My experience was like in an action movie; my adrenaline was high. I didn’t knew what was happening. I just knew that I finally was going to see my mom and my siblings, and if the people in-charge told me to run, I had to run, if they told me to hide, I had to hide.

I was able to cross but others were not as lucky as me. Many people were left behind, some died, and others were raped. Each story is different but at the end everyone who tries to cross the border wanted to give a better life to their families, especially for their children.

Wouldn’t you do the same for your family? When we entered the United States we thought that our lives were going to be Color de Rosa (everything is going to be perfect) but it is not: the reality is that everyday we live with a sense of fear of being deported. Human beings like you and me should never live in fear. 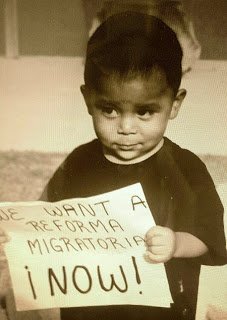 Just a few weeks ago I heard the story of a child whose dad was deported. His mom now has to work harder to support her family, but because his father is absent, he was sexually assaulted. First of all, this child has all the right to have his family together no matter what. Second, no child should be abused in any way because of the absence of a parent. Third, IT IS TIME to reunify these families. It is time to give those children the opportunity to have a normal life without the fear of their parents been deported. 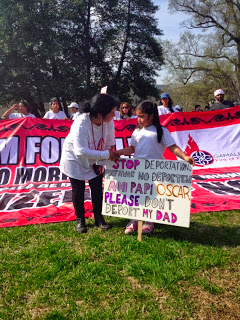 Someone once told me “I understand that you are getting the DACA ( Defer Action for Childhood Arrival) because you are a student, and because you never had the choice of coming to this country, and your parents never asked you. But you need to understand that there are a lot of people against immigration reform because your parents did had a choice and that choice was to come legally or to stay in your country?”

I know this person is not the only person who thinks this way because I keep hearing this statement over and over again. Our parents had little choice if they wanted to give us a better future and a better life. What parents wouldn’t do this for their children? I wish people understood how hard is to get a visa, and how hard it is to have a life in our countries. 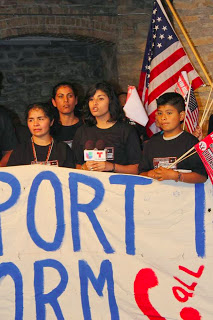 Nor is it easy living on this side of the border. I had work in places where immigrants are been exploited just because they don’t have the right of documentation to be in this country, places where they make their workers work six days a week, twelve hours a day with just one hour break with a salary of $300 dollars per week, not even making the minimum wage of Minnesota.

One time, one of my former coworkers asked for a raise and the answer was “bring me a social security number and I’ll give you a raise.” Really? I thought Abraham Lincoln passed the Emancipation Proclamation in 1863! We as the new immigrants are like the new slaves of this millennium, by getting paid less than the minimum wage while not being treated with respect and dignity.

It is time to passcomprehensive immigration reform with a path to citizenship for everyone, not only for the students and farmers, but also for everyone else, our parents who also didn’t had a choice, our friends, our neighbors, and our family, but because we all contribute to this country in one way or another.

I pay my taxes,my mom helps me pay my college tuition.

My friend’s parents own their grocery store giving jobs to more people. My friend’s family own their house. Because now we are part of this country, because now this is our home, we have our lives, our families, our schools, our homes in this country. Because we respect this country like if it was our own.

Adapted from a post at The life of an immigrant in the United States. Bluestem solicited this post after reading about Castillo’s participation inTuesday’s march for immigration reform in Washington, DC.

Carolina Castillo is an SMSU student and a member of La Asamblea de Derechos Civiles.