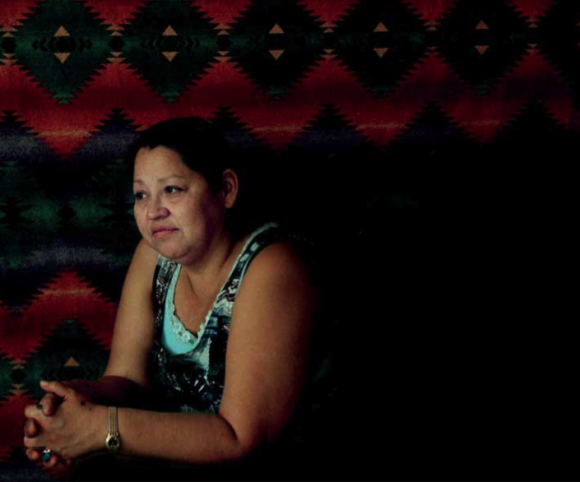 The relative of a young woman raped on tribal land. Photo: Adam Nadel for Amnesty International

A bill aimed at helping Native American law enforcement investigate rape and other crimes by non-Indians on tribal lands passed in the U.S. House of Representatives last week with overwhelming bipartisan support. Only one Minnesotan – Republican Michele Bachmann – voted against it.

The Tribal Law and Order Act passed last Wednesday as an amendment to HR 725 on a 326-92 vote, with votes from Minnesota Republicans Erik Paulsen and John Kline and Democrats Keith Ellison, James Oberstar, Betty McCollum, Collin Peterson and Tim Walz. It gives tribal police more authority in seeking prosecution of non-Natives who commit crimes on American Indian lands. There are more than 63,000 Minnesotans who identify exclusively as Native American, according to the U.S. Census.

In 1978, the U.S. Supreme Court ruled that tribal governments have no criminal jurisdiction over non-Natives. So when a crime is committed, there’s something of a “jurisdictional vacuum,” says Sarah Deer, a member of the Muscogee (Creek) Nation of Oklahoma and an assistant professor at William Mitchell College of Law in St. Paul, with tribal police and state or federal authorities having to hash out who’s responsible and how to proceed with an investigation.

“What we find is that, by and large, in most communities, nobody really takes action,” Deer said. “There’s not actually a legal loophole, but it’s a practical loophole.”

“The jurisdiction is just a huge mess,” she added. “It’s very confusing to determine who has ultimate authority to take on a felony level sex crime in Indian Country.”

Kirsten Carlson, director of the Safe Women Strong Nations program at the Indian Law Center in Helena, Mont., says that jurisdictional issues often slow – or halt – investigations into the “epidemic of violence against women” on tribal lands.

“If you call law enforcement, they’ll ask, ‘What was the identity of the perpetrator? What’s your identity? What’s the status of the land? And what kind of crime is it? Oftentimes tribal law enforcement says, ‘We can’t respond. Our hands our tied because it’s a non-Indian perpetrator.'”

This jurisdictional mess – or “maze of injustice,” as the title of a 2007 Amnesty International report coauthored by Deer puts it – ends up disproportionately hurting women. According to government statistics, one in three Native women will be raped in her lifetime. That figure is 2.5 times higher than the rate for non-Native women in the United States, says Deer.

“I’d venture to say that’s a conservative estimate,” Deer told the Minnesota Independent. “When I travel to Indian Country and talk to women, they tell me, ‘Gosh, I  don’t know anyone in my community who hasn’t been raped.'”

In addition to expanding tribal police authority to investigate crimes by non-Indians, the act increases the maximum sentence that tribal courts could impose from one year to three years. That’s “three times what we had,” says Deer, but it’s still well below the 7- to 10-year sentences she says she typically sees handed down by federal courts for convicted rapists.

“Prior to the Tribal Law and Order Act, there was a one-year maximum sentence for any crime prosecuted in tribal court,” says Carlson, who is a descendant of the Cherokee Nation. “You could murder someone and have a maximum one-year sentence.”

Carlson notes another key advancement in the act.

“While it doesn’t restore criminal jurisdiction to the tribes, it does increase the accountability of the federal government to tribal communities,” Carlson said. “For the first time, federal officials have to report back on declinations of these cases to Congress and tribal communities. Federal prosecutors need to maintain records…. That is a tremendous movement forward.”

Where the act falls short in the eyes of many American Indians, as Carlson’s comments suggest, is in tribal jurisdiction over non-Native offenders who commit crimes on tribal lands. Such cases will still be heard in state or federal – instead of tribal – courts.

“I should just be satisfied with celebrating this victory, but I’d really like to see Congress take on this issue of non-Indian perpetrators,” said Deer. She’s perplexed by the rationale behind the 1978 U.S. Supreme Court ruling, Oliphant v. Suquamish Indian Tribe.

“I think there’s a fear that tribal governments will be harsher on non-Indians,” Deer said. “I think that’s a racist idea at its core… the idea that tribal people can’t be fair. If you take racism out of the picture, then what the rule is doesn’t make sense.”

Carlson sees it as an issue of local accountability.

“What’s shocking about it is that under our constitutional system we think of crime as a local problem dealt with by local authority. This is a system where the local community doesn’t have control over it,” she said. “The reason that crime is a local issue in the United States is that then you can hold local people accountable.”

She notes that in Montana, there are 12 Assistant U.S. Attorneys (AUSAs) assigned to investigate rapes and violent crime on reservations, but they tend to live in bigger cities like Billings or Helena instead of on reservations. “It doesn’t impact them in the same way as it does in the local community.”

Still, Deer is “really, really pleased” that the Tribal Law and Order Act will soon be law.

“It doesn’t have everything that we would’ve wanted in an ideal world. You have to aim high and then accept the medium,” she said.

Republicans elsewhere, however, have questioned the bill’s price tag, which some have estimated at $1.1 billion.

That’s a “myth,” Deer says. “There’s been some misunderstanding that it was going to be a high-dollar bill,” she told the Independent, noting that “there’s no mandatory spending” in the bill.

Deer wouldn’t speculate on why Bachmann opposes this important boost for Indian women, which President Obama is expected to sign into law soon, but she expressed some surprise.

“I’m not sure why she didn’t. It’s very much about prosecution. It’s a very law-and-order bill.”