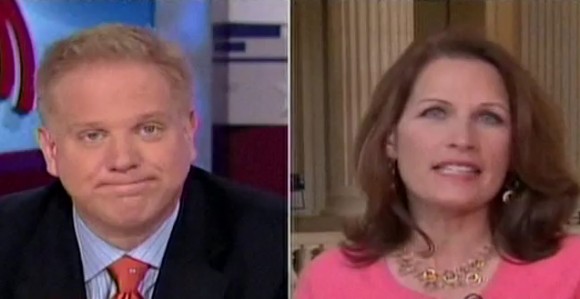 A statistic from Michele Bachmann made Glenn Beck go, “Whoa!” on his radio show Wednesday morning: “The federal government owns or controls 30 percent of private wealth” in America. Beck exclaimed that the stat was new to him and even to his aghast studio crew. Where’d she get that? Bachmann (again) cited as her source an unnamed Arizona State University professor. The Minnesota Independent found the prof and asked him where he got the number.

I simply added up how much of GDP [gross domestic product] was govt run or govt controlled.  I gave an approximation that is pretty conservative. I suspect the actual number is more like 40%; if health care goes through then it will rise to over 50%.

Bachmann seems to have got the stat from this July 7 Washington Times paraphrase:

William Boyes, an economics professor at the W.P. Carey School of Business at Arizona State University, estimates that the government now owns or controls businesses that generate about one-third of U.S. economic activity.

The congresswoman added “According to” and quote marks and posted that sentence at her Townhall.com blog the next day. She has continued to cite it since, though usually without Boyes’ name attached.

Over the airwaves, Bachmann has company. Pundit Cokie Roberts said this on the Oct. 4 edition of ABC-TV’s “This Week with George Stephanopoulos”:

You know, right now, 40 percent, 40 percent of GDP is state, local, or federal money. I mean, that’s an incredible number. So that, you know, adding more [government spending] to that, I think, is going to … distort things even more. And the public is so concerned about it.

That inspired Politifact to try to nail down how much of the nation’s GDP really is in government hands. The answer turns out to be tricky: It depends on whether you count the money that the government transfer payments, such as Social Security, from one group of citizens to another.

Politifact bemoans that government statistics on its role in the economy simply haven’t kept pace with government responses to the recession such as stimulus spending, corporate bailouts and other programs. Boyes’ napkin-math is pretty much all we have at the moment.

Asked if the figure could be found in any published research, Boyes said “not that I know of” and recommended visiting the Cato Institute and Heritage Foundation websites for more information.

Coalescing against the Constitution

On another topic on Beck’s radio show, Bachmann couldn’t seem to make up her mind. She praised Beck for “the September 12th movement you instigated,” but also said, “People aren’t crazy. They haven’t been ginned up by talk show hosts.”

(Beck returned the favor by recommending listeners visit her website and make a donation.)

Bachmann said the 9/12 movement is a “huge tent” for people devoted to the U.S. Constitution and Declaration of Independence, repeating an image she conjures up often of those documents being the fabric of the tent.

Then it got kinda confusing: “The very parchment … is the tent that we are coalescing against,” Bachmann said.