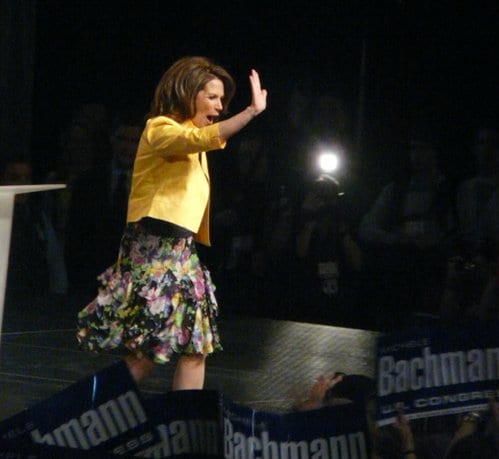 Thousands of people streamed into the Minneapolis Convention Center to hear Sarah Palin, Rep. Michele Bachmann and a bevy of high-profile Republicans speak on Wednesday. Many who took the podium claimed Jesus as their own – even mocking Democrats as godless – before Bachmann chastised President Barack Obama for taking away the nuclear option in response to cyber-terrorism.

Waiting for the event to begin, the crowd was treated to Go Fish, a children’s musical act that told the audience, “We use our music to spread the gospel of Jesus Christ.” The group says it targets children because that’s when people are most likely to convert to Christianity.

Opening the rally was Chris Baker, a controversial Minnesota talk radio host, who pointed to the crowd and said, “This is what the waiting room at the ‘Obamacare’ clinic is going to look like in 2014.”

Moments later, Mark Johnson, pastor of the Jubilee Worship Center in St. Cloud, led the audience in prayer. “Some would say America is no longer a Christian nation, but I pray in the name of Jesus that there would be another awakening in this nation that America would be a Christian nation and that all would acknowledge it as such.”

He continued, “We lift up today Congresswoman Michele Bachmann and her family. God, we ask you will empower her for this great event today… and God may you continue to grant her favor and strength throughout her campaign.”

Following the prayer, Baker again took the mic to quip, “A quick announcement here: Since he is saying God and Jesus, all Democrats’ therapy will start at 5:30, okay?”

In his brief address, Rep. John Kline said that Democrats “are taking away our freedoms. Our liberties given to us by our creator are being snatched away at a terrifying pace.”

Next up: Gov. Tim Pawlenty.

“We now live in a country where Wall Street gets a bailout, the poor get a handout and the rest of us get our wallet out,” he said. “Our constitutional rights and freedoms are under assault. American common sense is under assault.”

Bachmann, in a floral skirt and yellow jacket, took to the stage amid cheers, and quickly addressed the topics of national security and fighting terrorism.

“When it comes to the war on terror, I think none of us could have imaged we would see domestic attacks on U.S. soil… and now we’re not supposed to use the word ‘terrorist’ anymore?” she said, blaming Attorney General Eric Holder for what she characterized as Islamic terrorist attacks at Fort Hood and for the “underwear bomber.” “We’re not supposed to use the word ‘Islamic terrorist’ anymore. You might change the terminology but you can’t change reality.”

“So if in fact there is a nation who is compliant with all the rules ahead of time… if they fire against the United States, a biological weapon, a chemical weapon, or maybe a cyber-attack, then we aren’t going to be firing back with nuclear weapons,” she said. “Doesn’t that make us all feel safe?”

She ended with, “God gave us our rights! We don’t trade in inalienable rights.”

“Republicans have been getting criticized lately with this, this mistaken concept, I guess, sort of surrounding Republicans right now that they’re the ‘Party of No,'” she said. “And we’re saying, ‘What’s wrong with being the ‘Party of No’ when you consider what it is that Obama, Pelosi and Reid are trying to do to our country. So be it!”