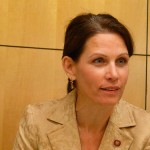 Rep. Michele Bachmann will host her second town hall on health care reform this Saturday in St. Cloud, according to a Tuesday afternoon email to supporters. The event will be held from 8:30 to 10 am at the Tech High School gymnasium at 233 12th Avenue S in St. Cloud.

Given the tremendous response from people at my recent town hall on health care reform – as well as subsequent public meetings where people were just itching to talk about health care reform – I’ve scheduled another town hall meeting for this Saturday, September 12th in St. Cloud. I hope you can join me for a discussion about this very important issue.

Bachmann’s last town hall in late August was attended by an overflow crowd of participants generally supportive of Bachmann’s anti-health care reform stance. See the Minnesota Independent video of that event at the top of the page.