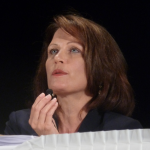 Hours before President Obama’s Oval Office address regarding the BP oil spill, Rep. Michele Bachmann had some choice words for the escrow account in the works – designed to aid spill victims – during a luncheon Tuesday held at the Heritage Foundation in Washington, DC. She called it a “redistribution-of-wealth fund.”

In her address to the group, Bachmann attacked the White House proposal for BP to arrange a $20 billion escrow account to pay for damages from the oil spill:

The president just called for creating a fund that would be administered by outsiders, which would be more of a redistribution-of-wealth fund.  And now it appears like we’ll be looking at one more gateway for more government control, more money to government.  If there is a disaster, why is it that government is the one who always seems to benefit after a disaster, and that’s of course what cap-and-trade would be.

Full details of how the escrow account would be operated are pending, but early reports describe the account as one run by an independent panel, and it is intended to hold BP liable for all damages accrued due to the oil spill. The account’s funds will go toward paying for both cleanup efforts and damages for individuals such as Gulf Coast fishermen whose livelihoods have been damaged by the sudden toxicity in the ocean and beaches. In effect, the fund will prevent the government (and by extension, American taxpayers) from being fiscally responsible for BP’s actions. Is it a “redistribution-of-wealth fund”? Maybe, but in the same sense that one would be responsible for paying to repair a house he drove a car into.

Bachmann had some words of advice for Obama, as well: Don’t demonize BP. The Washington Post’s Dave Weigel caught up with Bachmann after the event, and confirmed that she is in favor of lifting the liability cap against BP. But the congresswoman then went on to defend BP against too much criticism from the administration:

They shouldn’t have to be fleeced and make chumps to have to pay for perpetual unemployment and all the rest – they’ve got to be legitimate claims.

The other thing we have to remember is that Obama loves to make evil whatever company it is that he wants to get more power from. He makes them evil, and what we’ve got to ask ourselves is: Do we really want to be paying $9 for a gallon of gas? Because that could be the final result of this.