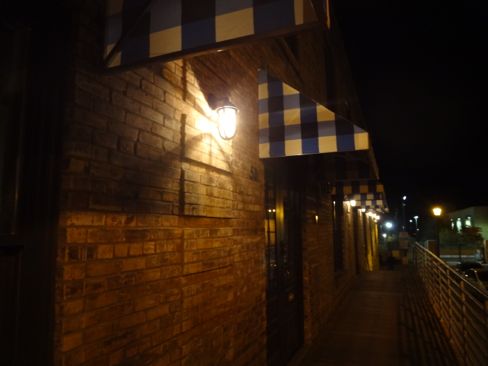 We finally made it over last week to the Bachelor Farmer, the Dayton brothers’ hot new restaurant in the Warehouse District.  I was kind of curious when it first opened last fall, so I stopped in for a drink and perused the menu. I don’t remember the details, but I think it was the split pea soup with ham for around $20 that gave me pause.

Carol grew up on a farm in northeast Iowa, where there are plenty of bachelor farmers, Norwegian, Bohemian and otherwise, and I don’t know any self-respecting farmer, who would spend that kind of money for a bowl of split pea and ham soup.  More likely, they’d head for some place like the Hole in the Wall in Lawler, where you can get the all-you-can-eat Friday night fish special or Saturday night chicken dinner special including salad bar for $8.75.

Which may be why we didn’t see a lot of people who looked like bachelor farmers at the Bachelor Farmer.  More people who look like ad agency account execs and assorted urban hipsters.

Of course, this wasn’t just plain old split pea soup, it’s split pea soup re-conceptualized, with the finest of ingredients and such creativity and attention to detail that it transcends split pea soup, and becomes an homage to a Scandinavian classic. Or something like that.

At any rate, after that traumatic encounter with the Bachelor Farmer’s menu, I didn’t set foot in the place again until last week, when Carol and I decided not to go to Brittany. With the money we saved, we decided to treat ourselves to a staycation, and do a bunch of touristy things right in our own hometown.  (We could have saved even more money by not going to Norway, but the weather there is kind of cold this time of year.)

And what could be more touristy than going to the Bachelor Farmer, now that it has been written about in the New York Times? Actually, tourists would have a hard time finding this place. There’s only a tiny sign on the door. And the uber-hip Marvel Bar in the basement is even harder to find, with no sign on its door.

We had a grand time and a delightful dinner.  The cuisine may not be authentic bachelor farmer fare – which leans heavily towards green bean casserole with cream of mushroom soup. (Or so I thought. Correction by Carol: “Bachelor farmers eat pork and beans out of cans and canned peaches and yes, cream of mushroom soup, but not green bean casserole. That takes preparation. I know this well because when my mom went out of town or was in the hospital, this is the stuff that my dad made. Really.”)

But it is created with great creativity and attention to detail. As the Bachelor Farmer website explains, “The Bachelor Farmer draws inspiration from contemporary Nordic cooking, which emphasizes simplicity and fresh ingredients of the highest quality. The cuisine found in the Nordic region today is very different from what many people think of when they hear “Scandinavian food.”

Our dinner started with a little basket of house-made cracker bread, fresh radishes, salt and butter. It’s a delightful way to welcome guests, although it owes more to France and Gabrielle Hamilton than to Nordic cuisine. (“Everybody who’s anybody in food knows about Gabrielle Hamilton’s radishes with sea salt and soft butter.”) 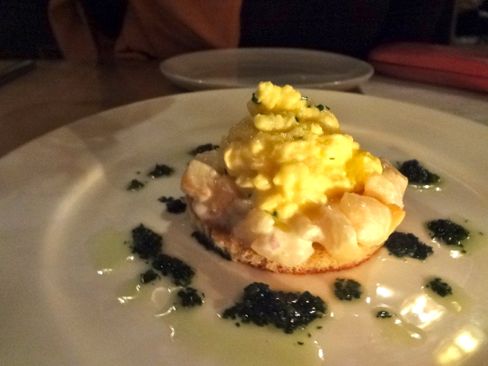 Next, we shared an appetizer of smoked scallops and scrambled eggs served over toasted pain de mie, which was wonderful – an unexpected combination that produced a surprisingly delicate result. Smorrebrod – open-faced sandwiches, are a Scandinavian tradition, and the Bachelor Farmer’s twist is to deconstruct them – you get a plate of duck pate, or beef tartare,  and some toasted bread, served in a rack, and you assemble the sandwiches yourself.  The one we tried, the sugar and salt cured salmon with mustard sauce and cucumber pickles was sublime. 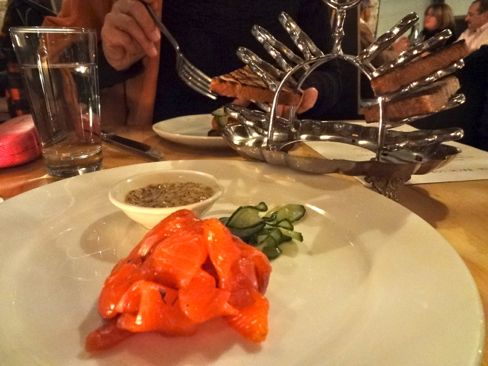 Split pea soup is not among the entrée choices on the current (fall) menu, which ranges from poached eggs with fingerling potatoes, red kuri squash and toasted walnuts ($16) to breast of duck with black lentils, fried kale and Carmen pepper jus ($28). We were both delighted with our entrees – Carol ordered the nightly fish special of Alaskan cod with faro and clams ($24), while I chose the grilled leg of chicken (deboned) with vermouth-braised leeks and roasted cauliflower ($21). Both were simple but delicious – the chicken had a crisp skin and tender, juicy meat, while the cod was done to perfection – not undercooked, but with just a hint of translucence to the delicate flesh. 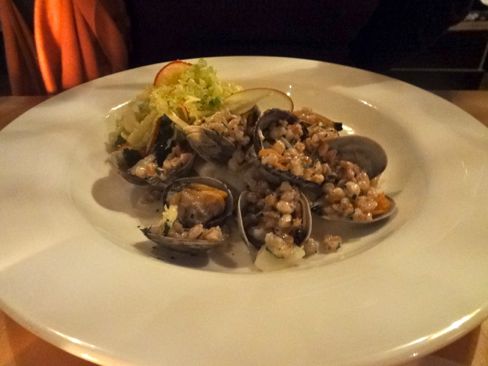 There wasn’t much on the wine list ($8-12/glass; $30-$70 bottle) that sounded familiar, but the Bachelor Farmer offers a nice option that I would love to see adopted more widely.  If you want to sample a wine that isn’t available by the glass, you can order a half-bottle of anything on the menu. The rest of the bottle is then offered by the glass, with a running tally of available glasses tracked on a blackboard.

For dessert, we chose the most farm-y thing we could find on the menu – three cookies ($5) – a ginger snap, a Linzer cookie and a macaron-like sandwich cookie, all very simple and tasty, and actually, kind of like what you might get down at the farm around the holidays. 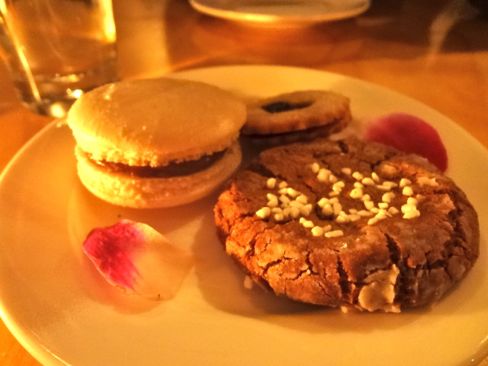 Given the aura of trendiness that surrounds the Bachelor Farmer, I came expecting a high level of attitude, but I found none. Service was friendly and attentive and unpretentious. In a word, nice.