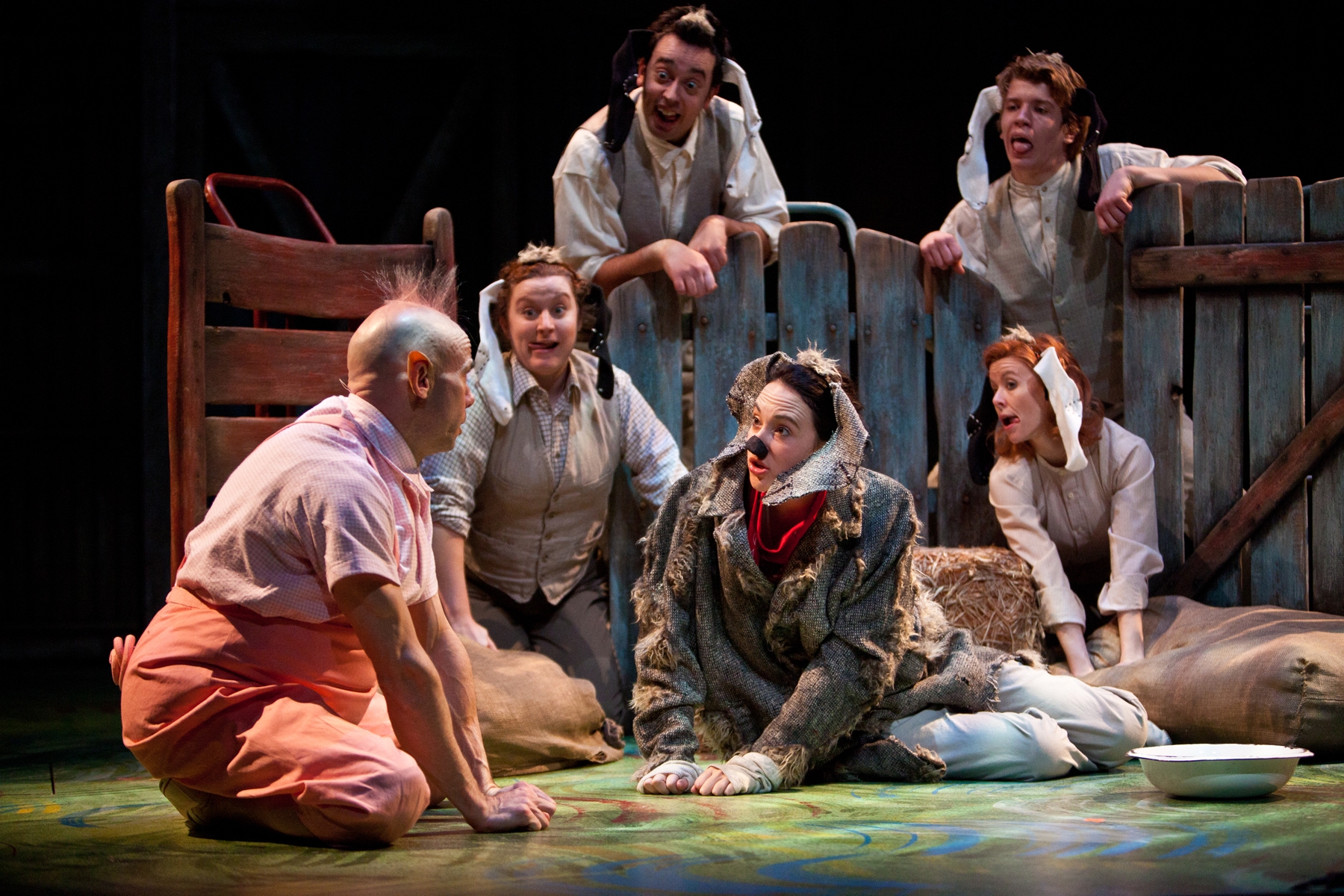 Q. “Why did the Farmer put corn in his shoes?”
A. “To feed his little piggies!”

Thus we begin the sometimes unbelievable, yet always heartfelt, attachment to fine swine. They’re pink, they’re cute (at least when they are animated), and they (eventually) provide a #1 source of enjoyment. But let’s not go there.

Let’s go to the Children’s Theatre Company for their production of Babe, the Sheep Pig! You have an entire month left to see this play, and that is good, because seeing it once a week is a sure way to cure what ails ya’ during the gloomy month of February. Bring your children for sure. Bring your inner child. And bring your parents and your neighbors and your enemies. CTC’s production is one that everyone will enjoy and even learn a little lesson from. (It may turn those enemies into frienemies.) Yay!

Based on the 1983 book The Sheep-Pig by the recently deceased Dick King Smith, this adaptation by Dick Wood is directed by Peter C. Brosius with choreography by Michael Matthew Ferrell. The play opens at the county carnival (somewhere on a British Isle) at the “Guess Your Weight” booth. In this case, however, the locals are guessing a pig’s weight—Babe the pig’s—and the winner is Farmer Hogget.

Babe is Dean Holt, who may just want to stay a pig in his “real” life because he’s so darn cute and effective as livestock. The costume design by Sonya Berlovitz is minimal but effective, and keeps all limbs free to do, well, pig things: rolling and squealing and snorting, and (bet you didn’t know pigs did this) dancing! Let alone herding sheep. Pink suspenders embrace a pink pork belly. Pink shoes provide hoof-happy skips and shuffles. Top it off with a curly corkscrew of a tail and a tuft of mohawk-ish hair, and you have one adorable, you-want-to-take-him-home piglet!

Farmer Hogget brings Babe home to the barnyard where he’s (I don’t for for sure that it’s a he, but I’m guessing) immediately adopted by Fly, played by Mo Perry. Fly is a real sheep dog, and a mother, by nature. Fly also has puppies—played by an intensely creative ensemble of humans who must have watched “The Puppy Bowl” for hours to learn their moves, or listened and learned from the show’s “Stock Dog Consultants”: Susane and Chuck Hoffman. A highlight is a nap session, complete with the occasional paw kick that accompanies a pup’s dreams. So cute in real life. So touching on the stage. Fly teaches Babe the ropes, and eventually, how to herd sheep. Or does she? Babe wasn’t around his real mother for long, but long enough to learn the VIL (very important lesson): Be polite! And that VIL learned is what, in the end, makes Babe the success he becomes.

Ma(aahahah) the sheep is played by Camryn Reynolds. She, too, may want to remain in livestock world, as she clearly understands the stubborn, yet lovable, character lurking in lambs. (Let alone have a coat warm enough to get her through this crazy Minnesota winter!) Ma trusts Babe after an impromptu barnyard conversation, and convinces the local sheep to listen to Babe’s very polite requests. This, along with a secret word rhyme that all sheep everywhere understand, eventually wins Babe the highly coveted annual Sheep Herding Contest trophy.

Not having read the book, I can only comment on the adaptation via the movie. This performance does an excellent job leaving out the parts that would be challenging, if not heartbreaking, for children to understand, yet keeps in poignant, empathy-building scenes (like when Ma is attacked by sinister wolves). Performed in slow-mo dreamlike movement, the scene softens the cruel act and makes it understandable without being harmful. Kudos to CTC for that. There are seamless transitions from scene to scene, and the acting is charming. From a rooster made believable by only a red rubber glove that serves as its “comb,” to a flock of ducks flaunting big orange flapping bills and feet, the sparse yet comical costumes make it almost seem like a grand ballet at times: each movement matters, and each movement has been mastered.

The play holds true to its UK roots in location and in language. In retrospect, I think it would have held up without the British accents, which make some of the dialogue hard to understand. Mrs. Hogget, the farmer’s wife, is delightful, but quite high-pitched and occasionally incoherent. It’s a shame because her character is supportive and clever, and lends a comic relief to the stodgy Farmer Hogget. There are three audience interactions, which keep the children even more engaged. Very clever, and very nice.

A big thank “ewe”! to the CTC for a performance that’s engaging for all ages. I highly recommend that for an evening’s entertainment, you and your family “pig out.”