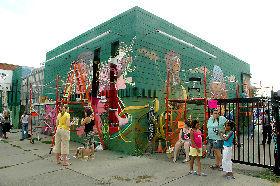 Participants gather at Intermedia Arts for the second annual B-Girl Be festival.

When most people think of “hip hop” they think of bling-ed out, misogynistic, commercial … uhh .. music, yeah, or crap, you can call it crap.

Most people aren’t aware of alternative voices in hip hop, the four distinct disciplines, and they probably aren’t aware of the many women who live and work in the field, adding their voices, beats, moves and art to the diverse and rich phenomenon that is true hip hop.

Due to the small number of female practitioners in hip hop during its 30-plus years of development, women were usually relegated to being the only female in an all boy crew, serving as the oddity or the novelty.

In time, women created global networks as a way to generate solidarity. Last year, Intermedia Arts partnered with local curators and hosted the first summit of its kind, B-Girl Be, a celebration of women in hip-hop.

Audiences of more than 3,000 people came to see more than a hundred local, national and international hip hop artists to learn and practice the individual elements of break dancing, aerosol art, rapping, and the turntable.

Keeping with its desire to challenge the norm, B-Girl Be went beyond the four-element hip hop model (break dancing, aerosol art, rapping, turntable) and offered workshops, exhibits and demonstrations centered around audio and visual production, exhibition, fashion, entrepreneurship, and scholarship.

Building off the enormous success of B-Girl Be’s first year, this year’s celebration aimed to offer a unique gathering where the execution of hip hop meets up with its conceptualization.

The organizers of the event stressed that this is an event for kids and families, all ages, all genders, all incomes, and all ethnic communities. They also stressed that B-Girl Be wants to, “not only recognize and celebrate the role of women in hip hop, but also empower future generations of girls and boys alike to claim their place by experiencing, visualizing, interpreting and organizing hip hop on their own terms.”

The curatorial team, made up entirely of women (they do allow for males to serve as advisors) say that Minneapolis, though perhaps not the first place you’d think of for an all-female hip hop festival has proven to be a great space. “Last year we learned that Minneapolis, as a site for this type of convention, and Intermedia Arts as its cradle, allowed artists to unite under the pretext of a globally recognized conference yet removed from the pressures of defending East and West Coast or other territorial philosophies,” the team said in a statement. “By adding a stronger international scope on the summit this year our intention is to challenge the local scene by providing tools for advancement while permitting the global hip hop community to think beyond the metropolises. We believe that bringing together b-girls from around the world for four days not only creates new networks that remain in the local webs but also ferments new discussion abroad.”


They also added two week-long youth camps following the summit that allows for a more relaxed and intimate encounter with hip hop’s elements and their production. The six weeks following the summit also include performances, film screenings and talks for multi-generational audiences alongside the B-Girl Be exhibit that runs through mid August.

Miranda Jane, former editor of The Source magazine says, “As a 7-year-old girl in the ’80s in Los Angeles, I watched my cousins bust headspins and helicopters outside on their linoleum. I wanted to break too, but they said “girls don’t breakdance, it’s too dangerous. They were dead wrong—hip-hop is full of B-Boys and B-Girls. But in order to live the dream, you have to have inspiration and role models.”

Jane participated in the first B-Girl Be Summit and said, “For young girls with dreams like the ones I had, they’ll get the chance to see B-Girls in action, representing all four elements of Hip-Hop.”

This message is emphasized over and over again by organizers, who aim to be the role models they never had. They hope to break the stereotypes women in hip-hop face and forge a path for the future generations of b-girls.