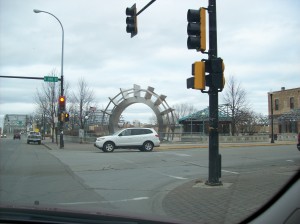 I never sleep well the night before I head home for the holidays. I have a subconscious terror that I won’t be allowed to return to my apartment after my visit, that my mom’s leftover hotdish will be confiscated and I will be thrown in a suburban holding cell, peering at Minneapolis in the distance through barred windows. “Little too yokel for this town,” the officer will sneer, after my mindless singing of local commercial jingles exposes me as the fraud I am. (But Home of Economy really is where your dollar buys more!)

I tell people I grew up at the end of the world. It’s not exactly true, of course. There’s always Canada. But it’s close enough to get CBC on cable, which is probably the thing I miss the most from there other than my parents. Though I constantly fear being thought of as uncultured, I secretly pity everyone who has never known the joy of seeing Don Cherry’s suits on Hockey Night in Canada.

Grand Forks, North Dakota, is a town best known for being underwater and on fire simultaneously in the late 90s. To me, though, it’s the town I left for Minneapolis eight years ago, the lure of city life and the prospect of evening plans other than “drive around, go to the truck stop” too enticing to keep me.

Four hours west and one hour north. Five hours of me, the road, and nothing else. A ritual always undertaken at Thanksgiving, Christmas, and usually at least one other weekend a year. It’s far from an adventure. How can it be, when everything’s so familiar?

I leave from work. Heading west. Goodbye buildings. Goodbye suburbs. I pass the time through the Bachmannian horror of the area around St. Cloud by flipping off every pro-life billboard. It makes me feel better. It also keeps me awake.

I could fly home. I have before, when an ice storm made a three-hour stretch of interstate impassable. This was back when Northwest still existed and the route always used planes from the 60s that constantly rattled in the air, a 45-minute exercise in clutching armrests with an internal melody of Camptown Races: “I don’t want to die today, doo-dah, doo-dah…”

But it doesn’t seem right. Besides being ridiculously expensive (I could fly to LA for less… and why didn’t I?), it feels like cheating. To go home means to have the full experience of travel, to have that time alone to prepare, to shift my mindset. What is that saying about putting a frog in a pot of water and then setting it to boil?

In Alexandria, I stop to fill up my car and feel the first hint of my destination, in the form of a brutal north wind that makes my warm winter coat feel like a tank top. Here, the wind is unstoppable, screaming through flatlands, laughing at mere attempts of treelines, swirling at me from every direction. I should be used to it. I lived up here for 18 years, didn’t I?

The longer I’m away, the more I forget. The more this part of the world exists in fuzzy, oversaturated hues, like old home movies. Recently, at dinner with a fellow expat friend, she mentioned a memory from high school I couldn’t remember. That part of my life is littered with static, with test patterns, with “Technical Difficulties- Please Stand By” graphics and cheerful music. I remember some very specific moments with friends, but the big picture fades in and out. The satellite needs adjusting.

The wind starts to shift it in place.

Between Alexandria and Fargo, I am truly alone with the road. The prairie makes for lovely sunsets, but the sun went down hours ago, before I even left Minneapolis. The darkness is absolute and surrounding, pierced only by my headlights and the occasional radio tower, soft red lights blinking in time with my heartbeat, reminding me I still exist, I am not in a vacuum. I make an iPod playlist for every drive home, with current favorites and songs that make me think of home. The problem is that much of the music that puts me in a North Country mood—the dreamy soundscapes of Boards of Canada, lazy bluegrass, lo-fi folk—also puts me in a very sleepy mood. Worse than that, it puts me in a pensive mood, and I begin to remember. The static fades and images begin to take shape. Here, I get this station. Every bad feeling from high school creeps up to the surface. The depression first, to numb me. Then the self-loathing, the constant reminder of my many failures of those days, and worse, the horrible suggestion that maybe I haven’t changed at all, I’m still the awkward loser of those seemingly long-ago times. BOOM! There’s the anxiety, right on schedule. Am I still a loser? What if I run into people I used to know? Will they laugh? Will they ignore me? I’d better just stay home the whole time, at least my parents won’t laugh at me. Right? Maybe this wasn’t such a good idea.

It’s time to switch playlists, time to go to my only defense, simply titled TURN IT UP, which starts with Sleigh Bells’ “Infinity Guitars” and eventually works through most of the Go! Team’s brassy repertoire, music that helps me battle not only tiredness but the demons within, the ghosts of past lives. If all else fails, not even the worst self-loathing thought can survive a booty-shaking Jock Jam.

I cross the border and the arrow points north. I see those two words for the first time. Grand Forks. 94 to 29 to home. I know the way. And it knows me, pulling me there, knowing that I’d return to it.

I know every exit, the miles along the way. 68, 51, 45 to go. The interstate overpass brings an exciting sight: North Dakota’s only hill, so the family joke goes. On the way up, I think I can, I think I can. On the way down, I thought I could, I thought I could. I’d like you to believe this is just something I think and not something I actually say every time, but I can’t pretend here.

I know it all, and it seeps in through my pores, flows through my veins. It is as though the land recognizes one of its own. The soil here is the best in the world for farming, rich, black, nutrient-filled. So we were told in our probably biased schooling, anyway. I pass the sugarbeet plant and my nose crinkles at the stench, and I hear my dad’s voice in my head, “The smell of money.” Though there are many things worse than being a farmer’s daughter, back then, I could imagine very few. But it was never like that. Pieces of straw never hung out of mouths. I may have worn overalls a few times, but it was 1995 and we all made terrible fashion mistakes.

Twenty-seven to go. County line. Buxton, Reynolds, Thompson. A soft purple glow begins to invade the black of the horizon, growing and growing until I can see the lights of the town itself and billboards begin to appear. I know what most of the billboards will be, and it jars me when one changes. The most telling is stark black text on a white background: Be Polite. There’s the sign they had to fix because they initially spelled Winnipeg wrong. There’s the billboard proudly proclaiming two Perkins locations. And there’s my symbol of homecoming, the now plain white water tower near the mall that used to have Grand Forks’ long-forgotten “Sunflake City” logo on it, half red sun, half blue snowflake. It was only painted over a few years ago, and I miss it. It was one of many branding attempts that never quite worked out, a perfect example of what I like best about this place: it’s never been anything other than exactly what it is, despite many attempts to try to make it otherwise. Very no-bullshit. Take it or leave it.

I’ve never missed living here, though I have dear friends from when I did. And when I’m with those friends, I don’t have to explain the references. These are the people who, upon reading the first paragraph, sang the Home of Economy jingle when it was mentioned. Who went on exotic school field trips to Canada with me and panicked when a rumor spread around the bus going back that we were going to get deported because some people bought hemp necklaces at the mall. Who lived in a world where we didn’t get Presidents Day off since we had the next weekend off for the state high school hockey tournament, because, of course, hockey is much more important than dead people on money.

When I was in high school and desperate to leave this place, it seemed like the worst place in the world. But since I left, my opinion has mellowed a bit. I’m not packing my bags to move back or anything (sorry, Grandma) but I tend to think of it now as a place where I didn’t fit instead of a harbinger of evil. Not somewhere no one in the world should ever live, but somewhere I had to escape so I could move on. Sometimes you have to leave to find your home, which I did when I moved to Minneapolis. I think with all the nostalgia about home as a place, as a physical structure where someone grows up, people forget that. Wherever you’ve been, wherever you’re going, you get to decide where home is and what it means to you.

I exit off the interstate at last. A few more turns and I pull into my parents’ driveway. Inside, I am greeted by a pair of hugs. Mom offers to heat up some tater tot hotdish for me and Dad lets me know I’ve arrived just in time for the local news, and catches me up on all the new reporters and the nicknames he’s given them. This is why I come back.

Holiday travel is an endurance test to get to what really matters: good times with the people I love the most. Watching old Christmas specials with my dad upstairs. Drinking wine with my mom on the enclosed porch and talking about life. Taking my grandma out to lunch at the local Chinese restaurant. Laughing with my cousins. These things could happen anywhere, but at this time of year, they happen here. And for that, it’s worth every last mile. It’s comforting to have survived the journey, take my bags upstairs, turn on some weird collection of Canadian short films, and fall asleep at the end of the world.

Sarah Howard is a contributing editor at Twin Cities Runoff.