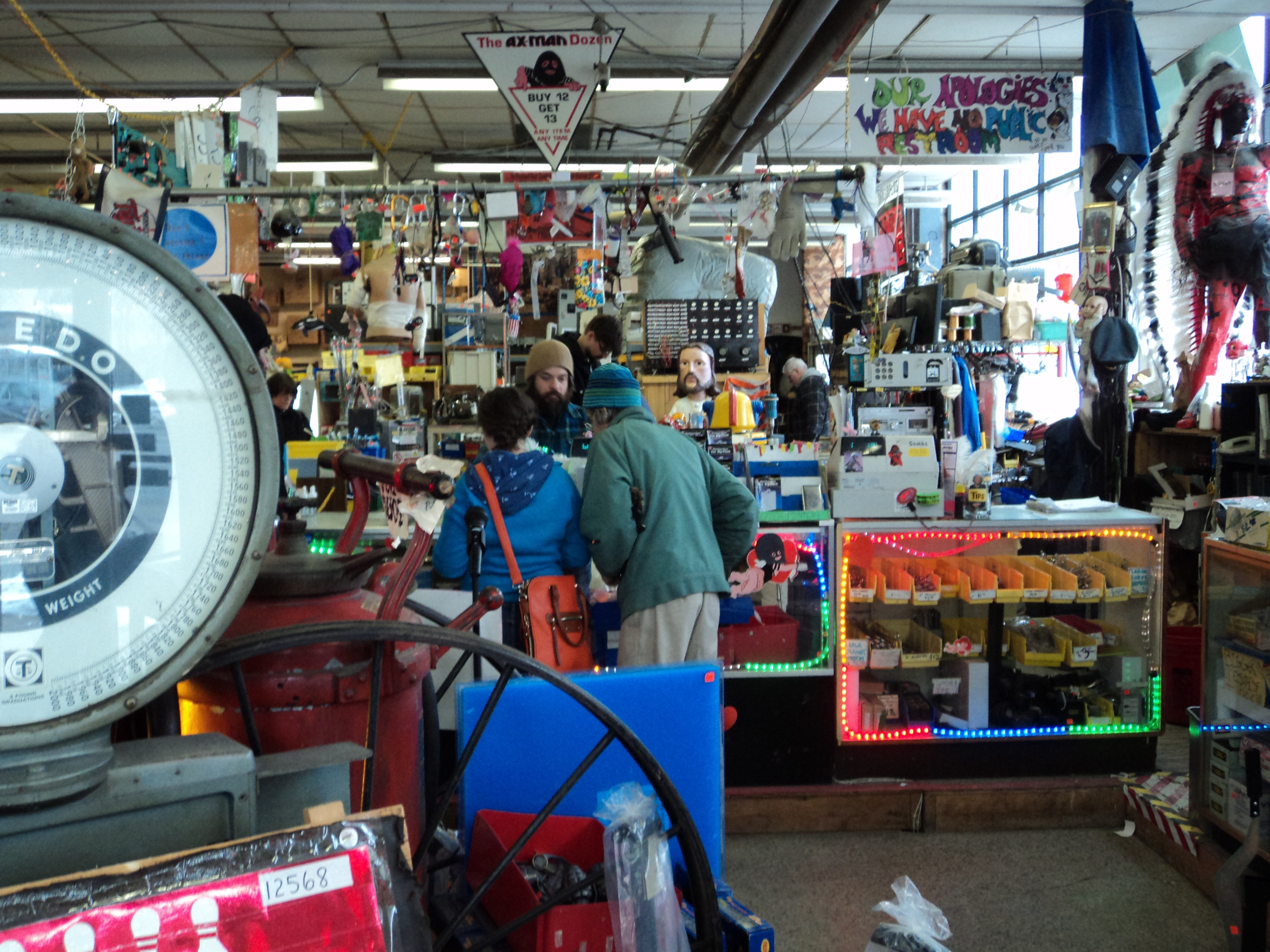 One of the managers of Ax-Man, Ben, helps a pair of customers at the register.

Packed into an old building at the corner of University and Fry, Ax-Man Surplus does not seem particularly noteworthy from the outside. Walking in, a potential customer is bombarded with a number of seemingly unrelated items. Several mannequins are waiting to greet the customer, dressed in whatever clothes the staff found lying around. These and a number of other goods are for sale: a crate of bowling pins, a bike, a box of umbrellas, tiny bells, garbage cans, a very-used nightstand, several rolling chairs, a giant model horse with a saddle, a giant scale, and a can crusher. And this is just walking through the entrance.

Ax-Man Surplus has lasted decades on University Avenue, now surviving light rail construction with the help of a unique approach to business and a loyal customer base.

It is hard to explain exactly what it is that Ax-Man sells. The website describes it as “A second home for collectors, crafters, artists, and those who love to tinker” and “home to pretty much everything you never knew you couldn’t live without.”

“No two days are the same, that’s for sure. It’s not mundane or ordinary, there’s a lot of variety,” noted Jim Segal, the owner of Ax-Man since 2000.

“Never ceases to amaze me, the interesting things that come through here,” said Eric Likes, general manager of Ax-Man and an employee of the store for the last twelve years. “Every day it’s different.”

One aisle’s sign advertises “lighting, bags and mailers, tape and hardware.” But hardware is not very descriptive for Ax-Man, with perhaps a fifth of the store’s products falling under that label, and besides that the aisle also features random pieces of foam and office supplies for sale. Some aisles have no signs whatsoever.

But they are packed with interesting items, even if not everything is for sale. It is common to strike upon some interesting diorama or model, like the iron lung that once held a clown or the man flying a plane suspended from the ceiling, to then find a sign reading, “This is my home, so you can’t buy me.” 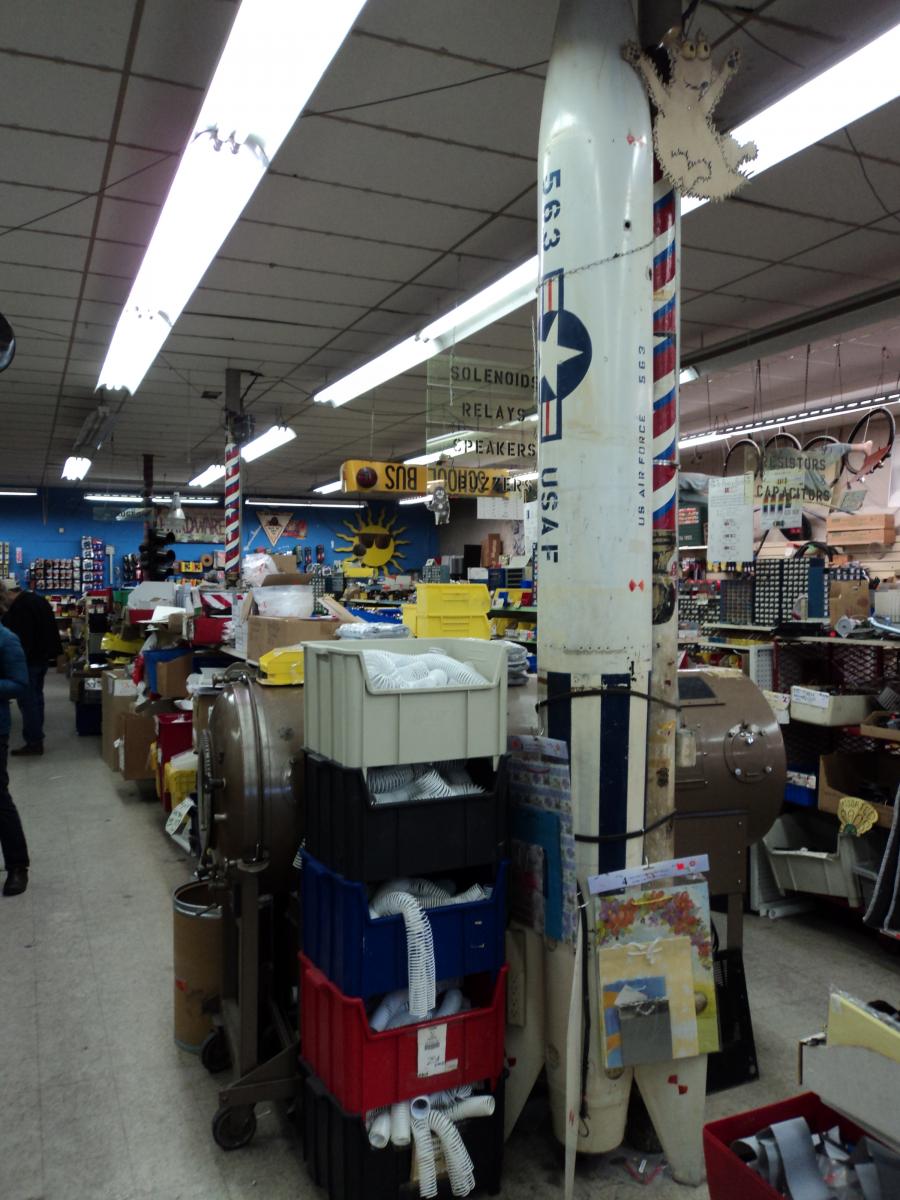 It does not, on its face, make sense for a business to advertise numerous products it has no intention of selling. Even what the store does sell is sold cheaply.

“The prices obviously are pretty entertaining,” said Dan Noefi, an infrequent customer who shops at the store when he visits friends in the Twin Cities. “I think everything here for the most part is a deal.”

“[I once bought] an awesome light cannon. It’s a large slide projector with a trigger. You actually hold it; it’s like all Swiss-made optics. They must have made twenty of them,” said Max McDougall, a regular Ax-Man customer. “Worth a ton of money if I were to sell it. I paid like thirty bucks or something for it.”

It may seem like bad economics, but the culture of Ax-Man has engendered an intense loyalty among its customers.

“I’ll do whatever it takes to get here,” said Robert Oveson, a customer from south Minneapolis who visits “weekly” and has been coming to Ax-Man since he was a small child. “I love this place.”

On a good day, one can find more than thirty people shopping in the store at once. Even on a Sunday evening with heavy snowfall that left the roads slick and kept most people in their homes, about twenty people came through the doors in the short span of thirty minutes.

“You name it, we have quite a broad variety of customers,” Likes said. “I think we’ve built up quite a following.”

That loyal customer base was critical during light rail construction in the area. Today, this section of University Avenue is largely complete, but during 2011 and 2012 local businesses felt adverse effects from the project, including customer parking shortages, general congestion along University Avenue, and power outages.

Segal, a member of the board of directors of the University Avenue Business Association, anticipated major problems as construction began. At one Metropolitan Council public hearing on the light rail project in 2011, Segal criticized a recent report describing the impact of the construction on local businesses and predicted Ax-Man would lose $100,000 in revenue during the first six months of construction.

“Thankfully, I was wrong,” he said in hindsight. “We were definitely more fortunate than others. It was impossible to avoid the impact, construction was so obtrusive.”

A December 2012 report released by the Metropolitan Council in response to a court order criticizing the 2011 report quantifies some of the business loss. A total of 76 businesses left University Avenue or shut down during construction, while 73 opened new storefronts along the corridor. Further, among businesses qualifying for support from the Business Support Fund, stores lost an average 30 percent of sales.

Segal credits Ax-Man’s loyal customers with the relative success of his business.

“Our customers are definitely fans and that’s helped us throughout the years,” he said. “We try to create a unique shopping experience that they enjoy and in return they’ve been faithful and loyal to us.”

Among those customers interviewed, nobody reported visiting Ax-Man less frequently due to the construction.

“That [the light rail construction] has nothing to do with it,” said Tim Hintz, a bearded man in camouflage pants who has visited the store since his dad brought him as a young child. He frequents the store regularly despite living in Eagan.

Hintz is part of a generation of customers who have grown up with Ax-Man, which set up the University Avenue location as its headquarters in 1966. There is McDougall, who has shopped at Ax-Man for nine years. Or Matt Stetler, a sophomore at the University of Minnesota, who first learned of Ax-Man from his second grade teacher, whose husband Jim Segal happened to buy the store around that time. It is common to see families wandering the store, overhearing fathers telling their children, “I used to have that as a kid.”

Even the employees are often long-term customers. Likes discovered Ax-Man as a customer, and today he works in management for Ax-Man. When he moved to the Twin Cities twelve years ago, “It was the first job I went for,” he said.

Some customers, like Robert Oveson, intend to raise the next generation of Ax-Man customers.

“I’ll be coming in as a decrepit old man bringing my grandkids in here,” he said.