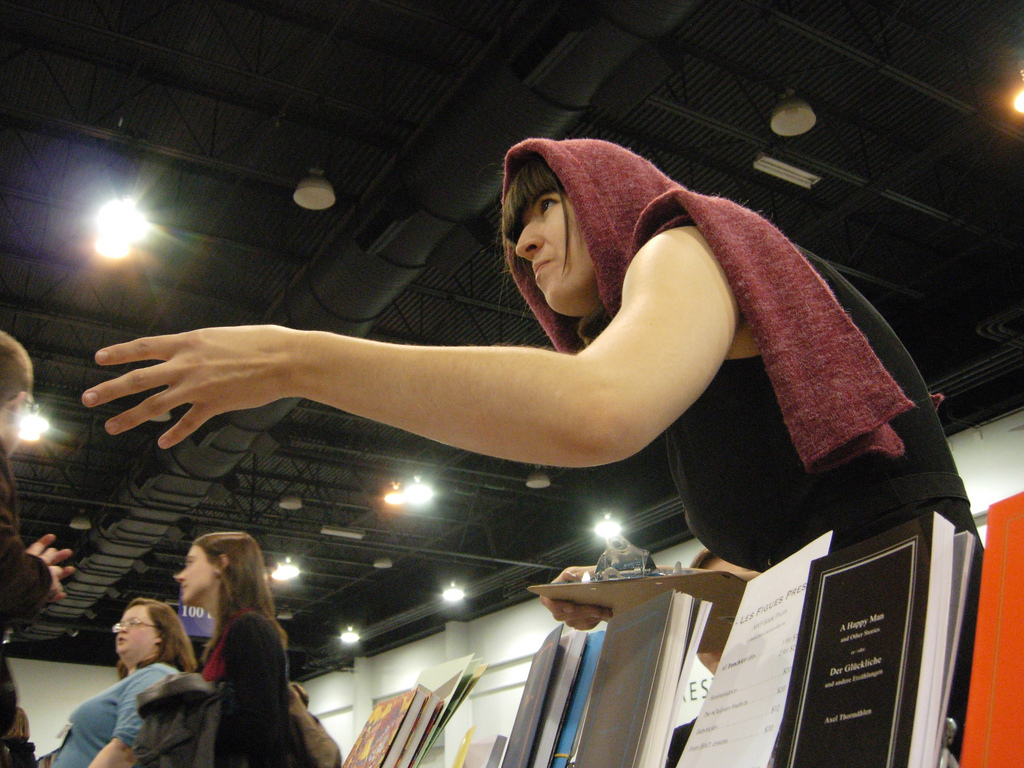 It’s February. Do you know what that means? The Association of Writers and Writing Programs (AWP) conference is right around the corner! That’s right, four whole days and nights of passing out your business card to people you hope won’t be offended if you consider them your peers, and Googling images of your favorite writers to make sure that yes, that’s them at that booth over there!

This year, AWP returns to the Hilton in Chicago, reprising the Midwestern glory of the 2009 event, and is being chaired by Minneapolis’s own Jerod Santek, program director at the Loft Literary Center, who has sat on the AWP board for the past several years. While Santek admits that he is pretty lucky to have landed in the yearly chair rotation in the year that brings the conference back to Chicago—as many of the initial hurdles to setting up camp in a new city were covered in the previous visit—the whole of the AWP staff is going to have their hands full with the 11,000 planned attendees. This year’s event is expected to be the most well-attended conference in the organization’s history, boasting Margaret Atwood as the keynote speaker, as well as presentations by Irvine Welsh, Rebecca Skloot, Jennifer Egan, Mark Doty, and Mary Jo Bang, among others. Not to mention a four-day bookfair with hundreds of exhibitors.

Last Saturday, Santek was neighborly enough to offer an informal informational session at the Loft on attending the mammoth conference, dolling out veteran advice to newcomers.

Along with tips regarding food, such as finding restaurants outside of the conference area for quicker, cheaper dining, and packing snacks—especially fresh fruits and vegetables, which are likely to be hard to find once at the hotel—to keep blood sugar up during stretches of back-to-back panels, Santek preached the importance of scheduling. Creating a daily plan for yourself (either on your own or using AWP’s online planner), and choosing routes through the hotel before getting to the conference, as the Hilton has a reputation for being a little difficult to navigate when filled with a throng of people, can really keep the event fun rather than stressful. (Also, he said, don’t try to do everything—it’s just not possible.)

One very important piece of advice Santek had for those looking to network was to bring a lot of business cards, and when handing them out, make a little note on the back reminding where, when, or under what circumstances the recipient met you. This will help your card stand out from the rest and increase the likelihood of a continued connection.

As if hosting that session wasn’t kind enough, Santek also created a guide to Minnesota presses and organizations at AWP, which can be found here. Among the organizations and presses going from the Twin Cities are Hazen and Wren, BookMobile, Rain Taxi Review of Books, Paper Darts, and the Water~Stone Review. (Side note: Hamline University is trying to get together a charter bus, and those seats need to be filled!) Looking at the list of on-site panels featuring Minnesota writers and organizations, I can tell you that there are at least nine of them on any given day, and a number of off-site events such as happy hours and readings, which will happen in the evenings in the neighborhood around the conference site.

While AWP is sold out for this year, it will grace Minneapolis with its glory in 2015. Get ready, Twin Cities!

Photo: AWP 2010, by Harold Abramowitz (Creative Commons). Coverage of issues and events affecting Central Corridor communities is funded in part by a grant from the Central Corridor Collaborative.