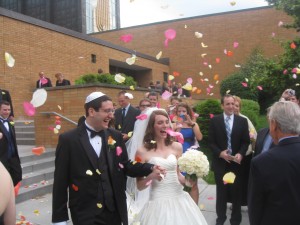 Covered in sweat and with feet that kill, I am here to declare my first Jewish wedding a success.

Spring is upon us, and so is wedding season. Having never been to a Jewish wedding, I didn’t really know what to expect. I did a little bit of research but none of it was overly helpful; thus I rushed out of my house excited and glad that I was not the one who had to wear a wedding dress in this humidity.

Upon arrival I was given a program fastened with green ribbon containing not only those involved in the wedding but an explanation of each element. Being a Reform wedding (although all Jewish weddings most likely have the same parts), the program promised nine things; circling, words of welcome, Kiddushin, exchanging of the rings, Ketubah reading, Nissuin, seven blessings, breaking of the glass and Siman-tov.

In case you’re attending such a happy occasion (and I hope you do soon), here are my crib notes.

The wedding began with the traditional circling, which consisted of first the bride circling the groom and then the groom circling the bride. This is to signify the breaking down of barriers between the two and their new family being created. Done under the chupah, it was nerve-racking to watch the groom circle the bride, as her train was rather large and the edge of the bima was close.

As with all weddings, even when the Rabbi officiating knows the bride or the groom, the welcome is mostly generic, calling on little bits of information from the couples past and this week’s Torah portion. Katie and Brian met on JDate.com and most likely had to take a test about their personality.  The Rabbi said that both of them scored relatively high on the optimistic scale. He used this to reference Moses’ humility.

This was the first blessing over the wine, and it was the first component to the wedding (or so the program tells me.) This glass of wine symbolizes holiness and sanctity. For me, the glass demonstrated the grace and the skill the bride possessed, as she had to drink from underneath her veil.

Exchanging of the Rings

The program put the simple act most eloquently; “the exchange of rings finalizes the mutual act of lifetime dedication. The two rings symbolize the two halves of a heart that is finally being united in full. The wedding ring is placed on the pointer finger of the left hand because of the romantic notion that its vein extends directly to the heart.”

Sitting toward the back, on the wrong side of the sanctuary, it was difficult to see the Ketubah. The Rabbi read the contract in Hebrew and English.

Nissuin and the Seven Blessings

The second component, or so the program says, symbolized the actual marriage of the bride and groom. It began with the Seven Wedding Blessings, or as the Rabbi described “the greatest hits,” and ended with the Yichud. The second and final cup of wine represents “unwavering love for a benevolent G-d.”

Breaking of the Glass

As with most Jewish ceremonies, one is reminded of the hardships and tragedies of the Jewish people. With the breaking of the glass we are not only reminded of the destruction of the First Temple but also of the permanence of marriage.

A traditional song of celebration, this song will always remind me of candy being thrown at me on my Bat Mitzvah. Although there was no candy in sight, the ceremony ended on a sweet note as Katie and Brian exited the sanctuary with big smiles on their faces.

Technically, these nine parts make a wedding, but joy and love is what truly brings the ceremony together. Watching Katie and Brian exit the synagogue with smiling faces I knew that whatever the rest of my evening would hold I would remember this Jewish wedding as perfect.