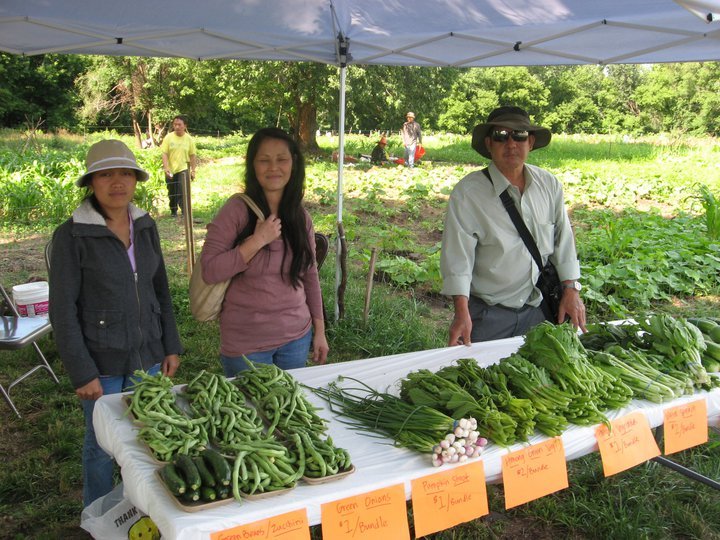 Re-designing our cities to support local food production and healthy living has been a very popular topic of late, happening against a backdrop of grassroots efforts to create networks of growing, distribution and consumption. It is interesting to watch this process unfold, seeing how farmers, advocates, and urban design professionals are envisioning and (sometimes) working together to build a local food economy. Through trial and error, headache inducing public meetings, and a lot of hard work, the Twin Cities local foods community has launched a number of compelling new public initiatives, urban farming operations, and farm-to-table networks. At the core of this creative process is a litmus test regarding the practicality of urban farming and local food production from a social, economic, and land use perspective. On one side there are institutional policy makers and administrators that are looking to support local food producers and protect agricultural lands. There are gardening advocates and non-profits dedicated to educating the public about organic growing, community gardening, and nutrition. There is a new generation of farmers and entrepreneurs, looking to develop new growing models and build a sustainable marketplace for local foods. Urban design professionals are trying to envision how this will integrate with our urban forms and work at a variety of scales. It is worth considering how these stakeholder groups are approaching some of the larger challenges they face by checking out some of the local efforts underway around the Twin Cities Metro. 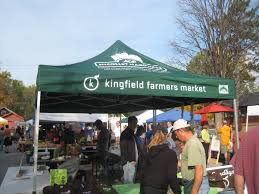 The City of Minneapolis launched the Homegrown Minneapolis initiative to support its local foods community and implement policy changes to remove barriers that stand in the way of urban agriculture. The initiative has involved an extensive public participation process to engage the community and develop forward thinking programs and policies that address issues such as farming ordinances, urban livestock, and the sale of products onsite. The policies draw a clear distinction between community gardens and urban farms. Urban Farming is an intensive land use which allows for growing, processing, and distribution year round but the use is limited only to industrial districts. Community gardens, on the other hand, are allowed in nearly all land use categories and participants can now market their produce on a limited number of days per year. Community gardens are often viewed as a “pop-up” or interim land use by cities and developers, yet successful ones can persist indefinitely. 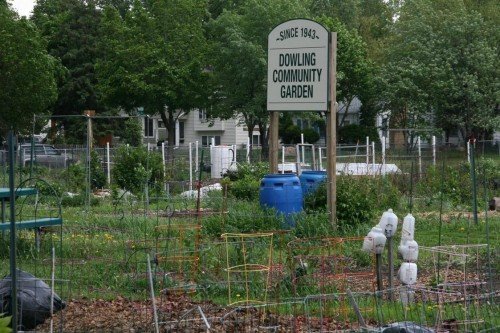 The Dowling Community Garden, is a neat historical example of a protected public gardening space that has been in operation since its inception as a Victory Garden during World War II. Because of this long term potential and the angst that occurs when a community garden is bulldozed, Minneapolis has determined that new community gardens shall only be established on lots that they have deemed unsuitable for development.

At an institutional level, many school districts have embraced the USDA’s Farm-to-School model that prioritizes access to whole foods and locally sourced school lunches. Bertrand Weber, the director of culinary and nutrition services for Minneapolis Public Schools has spearheaded a transformation of the logistics of food service delivery for the entire district. They have moved from primarily frozen and packaged foods to fresh vegetables and meats purchased from local farms and prepared by cafeteria staff. This approach is a growing trend as parents and teachers advocate for healthier meals despite the increased costs and complexity of preparation. Yet 169 schools in Minnesota have already embraced this model and more continue to do so every day. This institutional collaboration with local farmers is ideal because it provides them with a large and reliable customer base to help ensure that what they grow will be consumed. 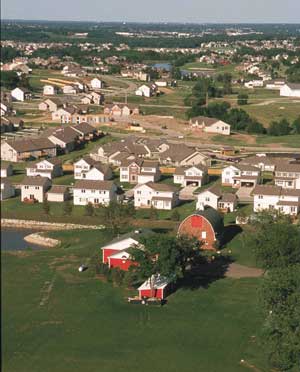 At a larger regional scale, there have been many ongoing efforts to preserve high quality local farmland and to prevent the fragmentation of working agricultural landscapes by urban sprawl. Al Singer, the head of the Dakota County Farmland and Natural Areas Program, has been working since 2003 to purchase development rights from farmers and other landowners to protect the vast tracks of prime farmland in Dakota County from suburban land development. As fuel prices rise and it becomes prohibitively expensive to ship food in from around the country, preserving large tracts of prime farmland close to major metropolitan areas may well be a cornerstone of localized food security. This vision goes beyond improving access to fresh vegetables to encompass the re-creation of a regional growing, processing and distribution infrastructure capable of feeding millions of people.

While conducting my Capstone research several years ago, I interviewed Atina Diffley from Organic Farming Works about the friction between suburban land development and the preservation of working agricultural landscapes. She brought up an interesting point about the oversaturated marketplace for fresh organic produce. Her point was that you could grow enough organic broccoli on four or five acres of farmland to satisfy the entire local seasonal demand for broccoli, but the limiting factors are the lack of wholesale opportunities and regional processing facilities that would allow local growers to compete in the frozen and preserved food sectors. Likewise, the proliferation of Farmer’s Markets and Community Supported Agriculture (CSA) has been something of a double edged sword. On one hand Farmer’s Markets have led to greater interest and consumer access to fresh local produce, but the explosion of local marketplaces has cannibalized the limited consumer demographics and made it harder for farmers to reach a critical mass of buyers.

This range of practical considerations and the scale of the issues brings into question the necessity of integrating food production into the fine grain of our urban landscapes. If meeting the long term practical food demands of our urban areas requires an industrial scale of activities, what are the benefits of dedicating significant resources to cultivating smaller scale urban farming operations. This question is particularly pertinent as there is not a lot of evidence to support the viability of urban farming as a business model. There has been a growing trend among architects and landscape architects to design projects that incorporate food production and processing functions into their site and building plans. The greatest hindrance to many of these plans is often a lack of understanding about the economic and human realities of farming, substituting cool renderings for critical thinking. There are a range of concerns such as logistics, nuisances, staffing, and promotional activities that make it challenging to integrate cost effective and meaningful agricultural production into urban environments. 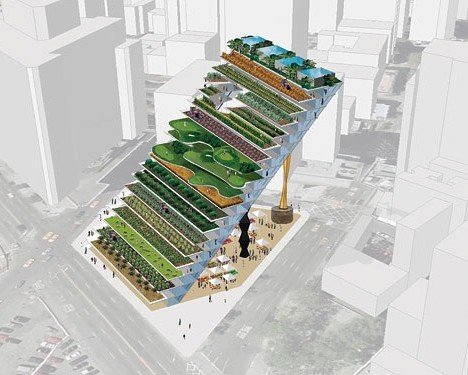 I’m not even going to touch the concept of the vertical farm because it is so patently ridiculous that outside of a sprawling asian megalopolis, I can’t see how it could possibly pencil out in reality. But beyond that there are several local examples of how people are planning to incorporate urban farms into the Twin Cities. 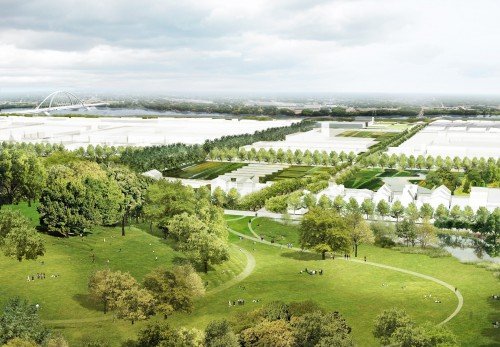 One example is the proposed land bridge across I-94 by Farview Park in North Minneapolis, a part of the RiverFirst proposal. Aside from the Intense engineering and construction costs associated with building a land bridge, the mind boggling question is why this open space would be programmed as an urban farm? This use essentially privatizes what would be a massive investment of public dollars and makes it largely inaccessible to north side residents. In addition, it seems like there would be some serious pollution concerns stemming from automobile emissions. 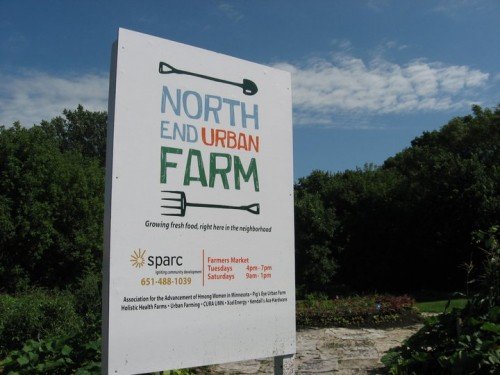 In 2012, the North End Urban Farm opened on a vacant 3.2 acre site off Maryland Avenue in Saint Paul. The farm was conceived through the collaboration of Sparc, a business assistance group, and four other growing organizations. The site is currently the only farmer’s market in the city where produce is sold directly from where it is grown. Of the growers operating on the site, one is a Hmong group dedicated to teaching Southeast Asian Women how to market fresh vegetables, and another is focused on cultivating and preserving heirloom varieties of tomatoes and other vegetables. The project stands out as a grassroots effort to convert a vacant lot into a productive space by mobilizing a bunch of people with similar goals. One of the participating organizations, Stones Throw Urban Farm, is focused on concerting vacant lots into small micro-farms. This is an example of one of many grassroots urban farming operations financed by individual initiative and Kickstarter money. Many outfits similar to this one are actually organized as non-profit organizations and supplement their income with grant funding and educational programming. Educating urban youth about healthy eating and where food comes from is a major focus of many of these groups. Organizations like Youth Farm & Market and Project Sweetie Pie have been raising vegetables on urban lots to teach inner city kids about what goes into raising vegetables, how to cook nutritious meals, and entrepreneurship.

Another new proposal is the Urban Oasis, a local foods processing and education hub to be located in the Bruce Vento Nature Center. The idea was the winner of the Saint Paul Foundation’s Forever Saint Paul Challenge, winning $1 million dollars in start-up financing. The Urban Oasis is envisioned to be a place where local growers could bring their produce, fish, and meats and process them into frozen foods or as canned goods. The site would also serve as an events venue and environmental learning center and will be sited within the former Lowertown Depot building as shown in the rendering above.

Obviously we are still in the relatively early stages of the interest in urban farming as a new business model, but there are very few examples of organizations that have been able to stay afloat without regular infusions of grant funding or government subsidies. Time will tell if some of the more avant-garde approaches to urban agriculture that are emerging will have the economic buoyancy to stay afloat for the long term. I’m interested to hear how the larger community feels about this issue as a whole and to hear about other local food initiatives that are underway.