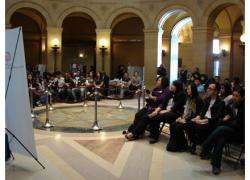 The State Council on Asian Pacific Minnesotans held its annual Day at the Capitol event Monday, giving organization leaders a chance to present their legislative priorities and for the community to learn about advocacy training and a chance to meet their elected representatives.

Organizers stated that this session and the volatile events of contemporary politics around the nation and the world demonstrate why building relationships and coalitions including elected officials is so important. With a state budget deficit of $5 billion and 60 new legislators, communicating with those who will be making the decisions at the Legislature is critical to promoting the well-being of the Asian Pacific community.

The event presented two “Advocacy Training 101” sessions where CAPM Executive Director Ilean Her and others taught people effective tools to making their voice heard at the capitol.

A forum followed in the Rotunda with elected officials speaking to include State Senators’ John Marty (D54), Sandy Pappas (D65) and Ellen Anderson (D66); along with State Reps’ Paul Thissen (63A); Rena Moran (65A); and Joe Mullery (58A). 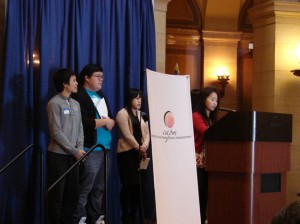 Executive Director Ilean Her is now joined by Brian Kao as the new research analyst, assisting with legislative affairs and conducting research to support the Council’s legislative positions.

Kao is studying for his Masters in Public Policy at the Unitersity of St. Thomas. The Taiwanese American moved to Minnesota with his family from Tulsa, Oklahoma in early 1990s

Pa Chia Yang is the new office manager and will oversee general office affairs and serve as the first point of contact for the Council.

Yang was born in Thailand and moved to America with her family at just three-months old. She has lived in Lansing, Michigan and Minnesota and graduated from Central High School.

In addition to her part time CAPM job, Yang is a part time sophomore studying social work at Metro State University. She is also a full time mother to a two year old daughter, Makayla. Her spouse Meng Xiong is currently studying law enforcement. The two live in Oakdale.

Saymoukda Vongsay is the Cultural Coordinator and will oversee funding from the 2008 Legacy Act to benefit Asian Pacific cultural initiatives in the state.

There are also new staff interns that have helped beef up the electronic presence of the Council, with a new blog site. 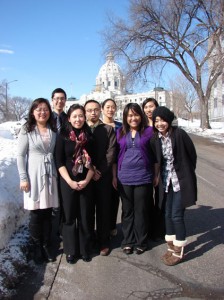 CAPM compiled a list of current concerns for the Asian Pacific community. They include the current $5 billion legislative budget deficit which is about one-eighth of the total budget expenditure of $39 billion. The legislature has proposed an “all-cuts” budget while Gov. Dayton has proposed a mixed approach of both increased taxes on wealthier Minnesotans and cuts.

Gov. Dayton’s budget includes cuts to health care for 7,200 low-income adults; Minnesota CARE health insurance capped at 200 percent of the poverty level or $44,700 for a family of four; an increase in spending for K-12 education; cuts to higher education; and a 2.8 percent decrease to Human Services.

“Although the legislature and governor have proposed vastly different budget solutions, it is clear that our budget deficient threatens many areas important to the Asian Pacific community, including access and affordability to higher education, human services, and health programs,” states CAPM. “Community members are encouraged to add their voices at the capitol to inform legislators what programs and services are important to them.”

Employment and workforce development: During the recent recession, many communities experienced difficulty with employment, including the Asian Pacific community. In 2009:

Ending Health Disparities: The Asian Pacific community has reported high instances of health concerns, including PTSD, mental illness, suicide, stroke, hepatitis B, heart disease, obesity, and substance abuse. Many of these concerns are disproportionately high compared to other racial groups or are rising.

The AP community also experiences disparities in health care access and quality of care due to lack of health insurance, linguistic and cultural barriers, and lack of knowledge of risk factors.

CAPM opposes HF 64, a bill making English the official language of Minnesota, threatens to remove many linguistic interpreters and translation services for communities with limited English. It also requires all driving license exams to be administered in English without an interpreter, which is vastly different from requiring exam takers to understand the English language traffic signs and messages commonly seen on the road.

Without recognizing the strong commitment among new Americans to learn English, this proposed bill is counter-productive in that it makes it harder for new immigrant and refugee populations to integrate with mainstream society.

It is important to remember that if immigrant and refugee populations fear unwarranted prosecution from police, they may choose not to contact police when they need their services the most

For instance, perpetrators of domestic violence have used the threat of deportation to keep victims from turning to the police for help. Many victims, even as legal immigrants, do not understand immigration law well and do not contact the police in fear of being deported. CAPM opposes bills that would reduce immigrant and refugee population’s access to public safety services.

The event concluded with a State Capitol tour with visits to legislators offices. For more information contact CAPM at capm@state.mn.us.