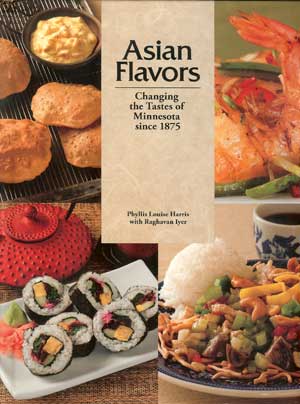 Photo of Phyllis Louise Harris (below) by Tom Nelson, tnphoto.com.

I have long been a fan of Phyllis Louise Harris’s restaurant writing. Harris, who was the restaurant columnist for the Asian Pages from 1991 until it stopped publication in 2011, doesn’t write restaurant criticism. Rather, her columns tell the stories of the people behind the restaurants, and the cuisines they offer.

So I was delighted to see that she has compiled her deep expertise about the local Asian food culture and history into a new book, Asian Flavors: Changing the Tastes of Minnesota since 1875, ($34.95 hardcover)  published last month by the Minnesota Historical Society Press. Harris wrote the book with Raghavan Iyer, a local cooking teacher and author with a national reputation as the author of three cookbooks on the cuisine of India. Asian Flavors is amply illustrated with beautiful food photography by Tom Nelson (and some historical photos as well) and also includes more than 150 recipes shared by the restauranteurs profiled in the book.

Each cuisine gets its own chapter; Harris covers the flavors of China, Japan, Vietnam, Thailand, Cambodia,  Malaysia, Korea, the Philippines, and the Hmong community, while Iyer contributed the chapters on the cuisines of India, Sri Lanka, Indonesia and the Himalayas (Tibet and Nepal.)

Alhough I have been writing about restaurants in the Twin Cities for nearly 40 years, I still learned a lot from Asian Flavors. Harris traces the origins of Asian cuisine in Minnesota back to 1883, when Woo Yee Sing opened the Canton restaurant at 246-248 Marquette Ave., which later moved to 28 S. 6th St., where it became known as John’s Place. Growing up in Minneapolis, Harris has memories that go back to the Depression of the 30’s, when a family outing to John’s Place for Chinese food was one treat her family could afford.

You can quibble with some of Harris’s selections and omissions — how could she omit Bangkok Thai Cuisine, the Twin Cities’ best Thai restaurant? But Asian Flavors does something much more important, giving a face and a voice to many of the chefs and restaurateurs who, over the course of the last 140 years, have transformed the taste of Minnesota.