Many North Minneapolis organizations sent representatives to the Forum.

“Has our community changed for the better in the last 15 years? Physically, nearby, yes,” said DeAnna Cummings of Juxtaposition Arts, setting a tone for the Bruner Loeb Forum in Minneapolis. “But for African Americans, no.” In fact, she said, our worst disparities are some of the highest in the country. “We know arts and culture are avenues to change those outcomes, and that was the gist of our studies at Harvard.”

DeAnna and Roger Cummings started Juxtaposition Arts, known as “Juxta,” in 1995 with another artist, Peyton, in the old public housing projects. This is about the same time they started having children. In 2007, they and the kids relocated to Massachusetts (DeAnna with a Bush Leadership Fellowship, Roger with a Loeb Fellowship) for a sabbatical year and then traveled, all to get knowledge that would help them set a new and even more useful direction for their arts school.

Juxtaposition has started acquiring more buildings and eventually plan to rebuild their corner of Emerson and West Broadway with specialized spaces. But on April 15 and 16, they were the gracious hosts, the focus and the stepping off point for a by-invitation national conference staged by two organizations from Cambridge, Massachusetts, the Rudy Bruner Award and the Loeb Fellowship Program.

At the conference, called Putting Creativity to Work: Stronger Communities through Locally Rooted Art & Design, local and out-of-town arts administrators and public officials tried their hand at a mapping exercise that might be helpful for West Broadway redevelopment. Also “Table talks” exercises let groups network across disciplines to find out more about each other and how they think. 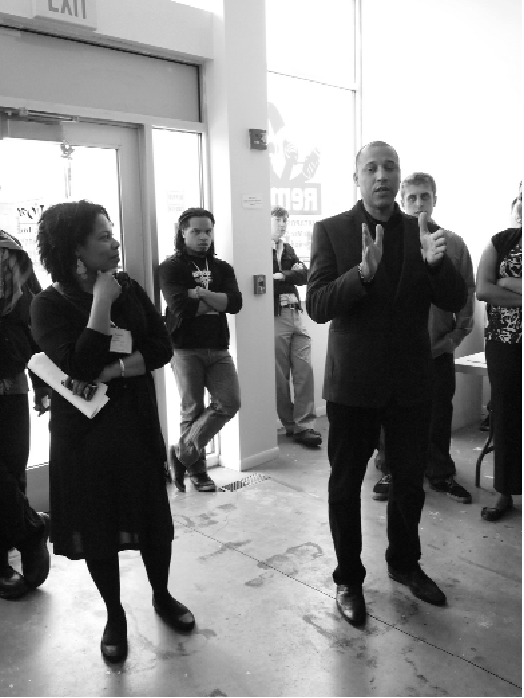 Seitu Jones, at right, and Allison narrated the bus tour.

Speakers throughout the days distilled their talks into 8-minute segments to keep things lively. And a chocolate-dessert-charged bus tour brought highly animated participants to Franklin Avenue’s All My Relations Arts gallery as well as West Broadway and Juxta on an otherwise frigid Friday.

Here’s some of what I found interesting and helpful from the two-day conference:

Theaster Gates, trained as a city planner, detoured through ceramics training, bought five properties after Section 8 landlords suffered vacancy and foreclosure, started a bookstore with inventory from a company that went out of business, for $4,000, and added records at 15 cents a disc. “It felt like an art gestural moment. I wanted to make the cultural elite in my city feel stupid because they’ve not done anything.”

Gates said he was tired of urban renewal and blacks moving away from the poverty problem. “What if I stayed?” Several conference participants stated that this was the most important thing they heard. Three years after he started, he was able to get a $4.5 million grant to do more.

Tom Borrup, who used to run Intermedia Arts and is now consulting and working on his PhD, said we all embrace the idea that arts help overcome economic disparities, but “The Creative City bandwagon has brought about greater economic disparity.” (Creative City, the work of Richard Florida.) He said that in order for arts to work to improve communities, the communities have to be functional. “We have to find ways to help them be functional.”

Many of the speakers talked about taking an asset-based approach, rather than a deficit approach. (They endorse reinforcing and using what’s already working in a neighborhood, rather than coming in with assumptions about what’s bad and fixing it by some outside prescription.) Borrup said there have to be three assets to balance off every deficit.

Sheila Smith, from Minnesota Citizens for the Arts, did a quick primer on how the “legacy” amendment got passed. Several unrelated constituencies came together because their values “had in common a belief in quality of life, and the outdoors.” She said the environmental groups have a national system for helping local initiatives, and 90 percent of such initiatives get passed when these systems are used. “We have voters who did stuff. Environmentalists and artists are voters.”

Cynthia Harnisch runs Inner City Arts in the heart of skid row, Los Angeles. It’s really called Skid Row, and “we have to sanitize the sidewalks every morning.” The surrounding school districts bus in close to 10,000 kids a year because the streets are too dangerous for the kids to walk in. Her boss said, “I want you to make our neighborhood safe and clean.” The building is a tall white beacon of pro bono architecture, the first project of a now famous guy; it started out as a run-down 1930s garage and kept growing.

Harnisch, answering questions at our table while the rest of us drew pictures and captured key words, to be incorporated into a joint art project, said “Ceramics is the best way to increase language.” It’s tangible. “We saw huge increases in math, and reading. By third grade, there [can be] a shutdown of the ability to see the future for oneself. Maybe for others, but not for oneself.” Arts work as an antidote, create what doesn’t exist, whether it’s a play, or something else, she said. “We’re not just playing with art supplies, this is highly research driven to help kids stay in school.”

Echoing a theme from an earlier conference speaker, Huenemann stressed the importance of consistent community engagement, “listening to folks. They articulate a vision, stand back and listen. We didn’t offer a meal, just coffee and cookies.”

One of the professors at Harvard researched how much income has to go into a family, to take them from moving all the time, to being able to put down roots—“$3,500 is the difference to help them do something,” DeAnna Cummings reported during the Bruner Loeb Forum field trip to their building. Roger Cummings explained that Juxtaposition Arts, 2007 Emerson Ave. N. now offers five different arts concentration areas: Visual Art Literacy Training, textile design, photography, graphics, and environmental design. Jeremiah Allison, a summer art instructor at Juxta, explained the mural on the side of Juxta’s building: “The point of doing a mural is to teach getting a point across without being literal.” Part of the graphic looks like a zipper being unzipped, like releasing all sorts of thoughts and dreams.