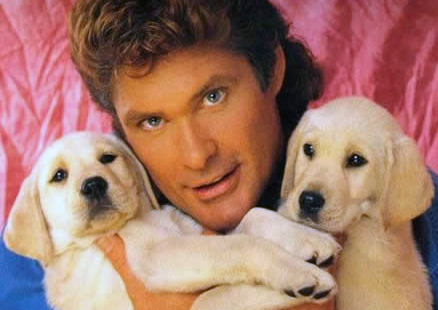 David Hasselhoff will be the (virtual) guest of honor at the Black Forest this Friday.

On the radar: At this point, what is there, really, to say about Evita? Not a hell of a lot, but the Webber/Rice musical’s legions of fans are sure to turn out for Theater Latté Da’s production, opening today at the Ordway’s McKnight Theatre.

Under the radar: For the post-Boomer set, Mark Bittman’s 1998 cookbook How to Cook Everything has replaced The Joy of Cooking as the ubiquitous kitchen-shelf pillar against which all other cookbooks lean. The New York Times columnist and all-around guru will be at the Minnesota Landscape Arboretum today as part of the University of Minnesota’s 2010 Healthy Foods Summit.

On the radar: Neighborhood-centric arts festivals are the order of the weekend in Minneapolis, where the Seward Arts Festival features a preview of Bedlam Theatre’s new temporary space and the Taste of Phillips Art Show and Celebration spotlights the many creative citizens to be found in the heart of the city.

Under the radar: With all the Oktoberfest celebrations taking place in Minnesota—where Germans are the largest single ethnic group—it’s amazing that it took this long for someone to stop and pay well-deserved tribute to Germany’s favorite entertainer. Tonight at the Black Forest, it’s David Hasselhoff Night.

On the radar: Tonight at First Ave, Roma di Luna and Dark Dark Dark both celebrate CD releases, with Caroline Smith and the Goodnight Sleeps opening. If you can’t find something to love among these three local bands, then there is no love in your heart.

Under the radar: The war in Afghanistan has become the longest war in American history, and to explore the history of Afghan conflict in all its terrible contradictions, London’s Tricycle Theatre is taking an epic approach. The Great Game: Afghanistan, opening this weekend at the Guthrie, features 12 one-act plays performed in sequence over the course of three evenings or a single weekend day.

On the radar: When the Daily Planet broke the story that the University of Minnesota had pulled the documentary Troubled Waters over concerns about its accuracy (which were later revealed to be concerns about its editorial perspective), the film became a flashpoint for debate over accuracy, bias, corporate influence, and censorship in academic settings. Ultimately the film’s scheduled premiere was rescheduled, and you can see it as planned today.

Under the radar: The Minnesota Renaissance Festival has become as big and chewy as a heffalump drumstick, and a lot of people love it for that. If you’re not among them, you might enjoy Caponi Art Park’s Medieval Fair, a more managable (financially and otherwise) way to visit the Post-Dark Ages.

On the radar: Women in indie-rock collectives are like women at house parties: they’re always outnumbered by awkward guys, and they leave too early. Neither Emily Haines, Leslie Feist, nor Amy Millan are likely to appear at First Ave tonight with Broken Social Scene, but the Canadian supergroup’s langorous guitar jams should be good enough to attract at least 420 fans.

On the radar: Nick Lowe is one of the most brilliant cyphers of his generation. As writer, producer, and/or performer, he was responsible for some of the greatest songs of the post-punk era: “And So It Goes,” “Cruel to Be Kind,” and Elvis Costello’s “(What’s So Funny ‘Bout) Peace, Love, and Understanding,” which Lowe wrote and produced. His taste for pastiche eventually took over, but he was always too good to be dismissed as simply a retro act. His well-reviewed 2007 album At My Age made a case for him as a singer-songwriter in company with his wry contemporaries Loudon Wainwright III, Warren Zevon, and—natch—Costello. He’s at the Dakota for a two-night stand beginning tonight.

Under the radar: If one approach to conveying the tragedy of war is the multi-perspective epic, another is to focus on the individual, to find the universal in the personal. That’s the approach being taken with the Israel-Palestine conflict in There is a Field, a play based on the writings of the Aseel Asleh—a Palestinian peace activist who lost his life to the conflict at the age of only 17. The play is being read tonight at In the Heart of the Beast.

On the radar: Jim Brunzell, a Daily Planet writer and the programmer for Sound Unseen, always lines up a stellar selection of films for the annual film-about-music festival, but this year he’s outdone himself. (Before becoming a film writer, Jim covered music for a number of local publications, attending multiple shows every week.) This year’s festival sprawls from Longfellow to Northeast, and spotlights a number of intriguing films—with, often, associated music events to boot. It all starts today.

Under the radar: At a happy hour this evening, you can meet the creators of the new online magazine Twin Cities Runoff and ask them the tough questions: Why do the Twin Cities need a new publication? Where can I read it? How can I contribute? How far can a cat wander from its house and still find its way back? Conveniently, the meeting is being held at Grumpy’s downtown, so if you decide it’s all a bunch of crap and I must be plugging their events just because they’re my friends, you can still eat a bunch of tater tots, drink a lot of beer, and stumble over to pee on the spotlights in Gold Medal Park. It’s a win-win situation.

• Upright Egg’s Venus: Volcanoes, pancakes, and green-haired alien sex kittens (review by Sheila Regan)
• Mixed Blood’s A Cool Drink a Water is an enjoyable family story (review by Bev Wolfe)
• The Love Knot comes to a Minneapolis theater gem (feature by Iliana Ostrin)
• Money troubles at the Ritz (feature by Gail Olson)
• The Oldest Story in the World is also one of the best, thanks to Theatre Novi Most (review by Matthew A. Everett)