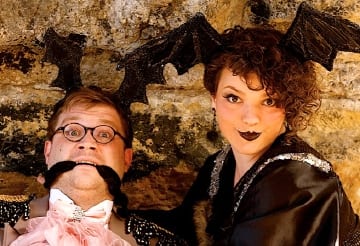 Don't shoot the piano player—but don't let him go, either. Batmama at the Fringe; photo courtesy Creatures of Fancy.

On the radar: As our blogger Matthew Everett pointed out to Downtown Journal, even if you see a different show in every single slot at the Minnesota Fringe Festival, you’ll still miss two-thirds of the shows on offer. So get started early: the Fringe starts today. (JG)

Under the radar: If Sophocles were a Southern Baptist preacher, he would have written shows like The Gospel at Colonus. Even though he didn’t, you’re still in luck, because Lee Breuer did and the show opens tonight at the Ordway, featuring the Blind Boys of Alabama, the Legendary Soul Stirrers, and the Steeles. (OSJ)

On the radar: Nervously optimistic about the effect of the Central Corridor, the neighborhood surrounding the University-280 intersection has decided to rebrand itself as “MidCity.” It’s a little bland, and they’re lucky that the name of the nearby Midway neighborhood isn’t trademarked, but the new name does emphasize the central location and great potential of this St. Paul crossroads. The new name is being rolled out with a splash at a neighborhood festival taking place today. You may or may not have the opportunity, or feel the need, to acquire a t-shirt bearing the intersection’s new slogan: “It’s more fun in the middle.” (JG)

On the radar: Art hounds come out of the galleries—whether they like it or not—for the annual Powderhorn Art Fair at Powderhorn Park. Take a walk in the park with 180 exhibitors, then catch a free shuttle to the nearby Uptown and Loring Park art fairs. (OSJ)

On the radar: It’s Limerick Day in Minneapolis—the result, not the cause, of the limerick contest at Kieran’s masterminded by the busy and incorrigible Bunny Sparber. Judges will include Sparber, humorists Bill Corbett and James Lileks, and possibly Carol Connolly and Jason DeRusha. No word on an appearance by Robyne Robinson, but it sounds like her kind of party. (JG)

Under the radar: Anyone from local artist Ben Garthus to local 7-year-old Benji Zimmerman might take exception to Lego’s claim that its new products are “the world’s first constructible board games,” but Lego fiends of all ages will be tempted by the three-day Legofest being staged this weekend in Minneapolis to promote the new games. (JG)

On the radar: Like the movie Juno, Edward Sharpe and the Magnetic Zeros’ inescapable song “Home” inspires mixed feelings. Some people simply love it, some people love it but hate that they love it, and some people love it but hate the other people who love it. Almost no one outright hates it, and the Zeros apparently put on a pretty good show. Tonight they’re outdoors at the Cabooze. (JG)

Under the radar: There are plenty of parodies of Broadway musicals to be seen on Hennepin, but this one is intentional: Where’s My Tony? (JG)

On the radar: While working their fingers to the bone trying to become known for something other than “MMMBop,” Hanson have managed to earn a fair bit of critical acclaim. See for yourself tonight at the Minnesota Zoo, where they are playing with Rooney. (OSJ)

Under the radar: When people speak of the golden age of Twin Cities independent booksellers, the first names off their lips are now-defunct community treasures the Hungry Mind and Odegard Books. Dan Odegard, formerly owner of his namesake shop, was recently diagnosed with multiple myeloma: plasma cancer. His many friends are gathering at Landmark Center tonight to raise funds for the fight. (JG)

On the radar: Wicked began life as a clever premise for a book by Gregory Maguire—why not tell the story of The Wizard of Oz from the perspective of the Wicked Witch?—then it became a bestseller, then it became a Broadway show that received mixed reviews but won audience members’ hearts, and ultimately it turned into a cultural behemoth on the order of Cats. It may not be the best show to play in Minneapolis this summer, but it’s certainly the biggest. The touring musical opens today at the Orpheum. (JG)

Under the radar: Rufus Wainwright is a singer who performs Judy Garland songs in lipstick and heels—and also writes operas. At Orchestra Hall tonight, see the man Elton John calls “one of the greatest songwriters on the planet.” (OSJ)

• New album under their belt, the Oh Eeks keep on rocking (interview by Dwight Hobbes)