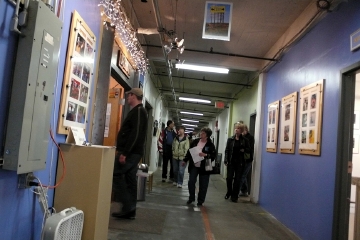 On the radar: Fashion is foundational to Minnesota history—after all, the state was founded on the trade in beaver pelts craved by the colonial era’s most elegant Europeans. The Minnesota Historical Society celebrates style tonight with RetroRama!, an event featuring vintage fashion (20th century vintage, rather than 18th century vintage), tiki cocktails, and live music by members of Dark Dark Dark. Will there be cocktail weenies? We can hope.

On the radar: Get your damn hands off her, Biff! GAYNGS, the biggest supergroup in local rock history (handily plucking that status from Golden Smog), release their debut album with an appropriately epic event at First Ave, playing two shows with the theme “The Last Prom on Earth.” Meanwhile, America’s biggest art crawl kicks off up Northeast way.

Under the radar: “Juggle Jam” sounds like a theme for a Freaky Deeky episode, but in fact it’s a gargantuan juggling festival featuring 140 dextrous young performers throwing up for two days straight.

On the radar: If you have no idea what guest-of-honor Sarah Douglas’s most famous role was, why that character was trapped in the Phantom Zone, or what the Limey was doing in there with her, SpringCon may not be on your calendar. It’s worth going, though—for the comics, for the creators of comics, and for the best State Fairgrounds people-watching between now and August.

Under the radar: My favorite play of 2009 was Dalí’s Liquid Ladies, and its creators—writer/actress Savannah Reich and director Samantha Johns—are reuniting for Fanciness vs. the Void, a new play that will debut at Open Eye Theatre before going on an east coast tour. Tonight they’re throwing a celebration and fundraiser that will feature a sneak preview of the show as well as “new or slightly used” performances by Johns, Dalí costar Kait Sergenian, Tom Lloyd, Jason Ballweber, Alisa Mattson, and Paige Collette.

On the radar: E-mail from Meredith Westin: “Might y’all want photos of the Lyn Lake Street Fest?” Well, obviously! Rumor has it that headliner Har Mar Superstar might, just possibly, strip down to his skivvies.

Under the radar: No, you’re not in a Christopher Guest mockumentary—there actually is a local production titled Click, Clack, Moo: Cows That Type. It’s a Stages Theatre Company joint, and today is your last day to see it.

On the radar: People will be packed into Magers & Quinn tighter than a tiger in a lifeboat as Life of Pi author Yann Martel appears to present his follow-up novel Beatrice and Virgil.

On the radar: “The girl that Conan O’Brien follows has 30k followers and she is boring as a piece of old wood,” tweets the ever-incisive Bobby Kahn. “With great power comes great responsibility.” If it doesn’t fatally color your judgment of the former Late Night host’s sense of humor to know he follows only a woman who tweets things like, “You drive me nutty. Sometimes you just urk me. there is no other work. urk urk urk,” you may want to take the opportunity to see him perform today at the Orpheum.

Under the radar: It’s day two of the first-ever Minnesota American Craft Beer Week, and across the state—well, across Dinkytown and Seven Corners—you have opportunities to meet brewers and quaff their wares at discount rates.

On and under the radar, respectively: I’m combining today’s picks purely so that I can mention Daughtry and Gay Beast in the same sentence.

• Charles Baxter’s The Soul Thief: A numbing experience (review by Elizabeth Paulsen)
• Books for Africa to stock Ghana library system (feature by Sahra Mohamud)
• Comics for all: MCBA’s SpringCon to attract thousands to the State Fairgrounds (feature by Cyn Collins)

• Digging Courtney Yasmineh on her own terms (or anyone’s, for that matter) (review by Dwight Hobbes)
• Kate Nash challenges her audience with a pounding performance at First Ave (review and photos by Jay Gabler)
• Decibels drop for Low at the Varsity (review by Jay Gabler, photos by Meredith Westin)
• In which Molly Dean trumps Cary Grant (review by Dwight Hobbes)
• “This is who I am”: Heidi Barton Stink spits truth about being a trans-identifying MC (interview by Justin Schell)
• Bikes, bars, and guitars (feature, about Lyn Lake Street Fest, by Uptown Neighborhood News staff)
• A soaring performance by Frightened Rabbit at the Varsity (review and photos by Jay Gabler)
• Shuga Records gets into the Art-a-Whirl spirit with a three-day showcase of local bands (feature by Crystal Erickson)
• As the Rhythm Changes: Mankwe Ndosi explores the crossroads of music and poetry (interview by Dwight Hobbes)