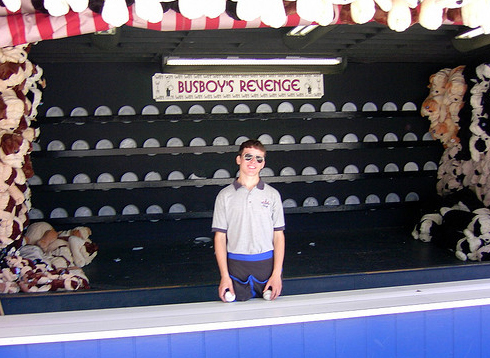 On the radar: It can be hard to love someone who’s so well-aware of his skillz, but it’s impossible to hate someone who runs a pirate supply store as a not-so-secret front for a nonprofit organization that teaches literacy to kids. If the louche Bret Easton Ellis and the wine-swilling Jay McInerney were Generation X’s paradigmatic authors, the formally adventurous, socially conscious Dave Eggers—not insignificantly, a guy from the opposite coast—epitomizes Generation Y’s ideal of what a great writer is supposed to be and do. Eggers is at the Hopkins Center for the Arts tonight.

Under the radar: The MovingCompany, the new and even more newly named collaborative venture between Theatre de la Jeune Lune artists Dominique Serrand and Steve Epp, makes its debut with Come Hell and High Water—a show appropriately titled for its troubled venue, the Southern Theater.

On the radar: Bridesmaids, the new film starring Saturday Night Live‘s Kristen Wiig and widely cited as noteworthy for being a major mainstream comedy largely created by women, opens in the Twin Cities today. Some scenes are pretty bad, but a lot of it is really good—definitely a notch above the status quo. Watch for my full review in the Daily Planet.

Under the radar: Bruce Springsteen’s 1978 song “Badlands” has nothing to do with Terrence Malick’s 1973 film by that name, but the film is based on the same true story that also inspired Springsteen’s 1982 song “Nebraska”: the 1958 rural murder spree of Charles Starkweather and his girlfriend Caril Ann Fugate. Malick’s film is one of the landmarks of American film from what might have been auteurs’ greatest decade, and as part of a series leading up to the local premiere of his new movie The Tree of Life, Badlands is screening today at the Walker Art Center.

On the radar: Valleyfair opens today for the season, boasting its biggest addition in years: a new 3.5 acre “Planet Snoopy,” with over 20 Peanuts-themed rides and attractions. Will the gang use this base as a staging ground for an assault to retake the Mall of America?

Under the radar: C.S. Lewis has become one of the unlikely heroes of 20th century letters, appealing to people across the theological spectrum with his thoughtful, human fiction and nonfiction meditations on faith. Lewis’s 1942 novel The Screwtape Letters has recently been adapted into an acclaimed theatrical production, now touring nationally and stopping at the Pantages this weekend.

On the radar: Finally, dear deity, it’s summer! There are two stages of music at today’s Lyn Lake Street Fest, but you may just want to look up at the sun and cry.

Under the radar: Young wordsmiths step onto the round stage at Caponi Art Park for an au naturel (definition 1b, not 1a) poetry slam.

On the radar: Does down-low dubstepper James Blake put on a great show, or a terrible one? Critics at SXSW this year returned both reviews—sometimes from the same night. (For the record, I was on the great-show side.) He’s at the Entry tonight for a whoa-sold-out local debut.

Under the radar: The Groveland Tap is hosting an event called Zinburger 2011: three courses of burgers, paired with Zinfandel wines. You can’t make this stuff up.

On the radar: The Cars helped to define the sound of the 80s: sincere emotion and strong melodies sheathed in slick, synthed-out production. Though bassist/vocalist Benjamin Orr died in 2000, all the remaining original band members have reunited, released a strong new album, and embarked on a national tour that stops at First Avenue tonight.

Under the radar: Happy birthday to us! The Twin Cities Daily Planet was officially launched on May 1, 2006; we’re celebrating five years of people-powered journalism with a happy-hour party at T’s Place on Lake Street.

On the radar: Lucinda Williams, one of alt-country’s most acclaimed singer-songwriters, is playing tonight in Rochester—with Haley Bonar opening. It’s worth the road trip.

Under the radar: Music insider Cyn Collins, who has contributed to the Daily Planet among numerous other local publications, has produced a two-part radio documentary about the Minneapolis music scene in the late 1970s. The second part airs today at 7:30 PM on KFAI, where both parts will also be temporarily archived for streaming.

• At the Turf Club, Joe Pug makes new fans and rewards old ones (review by Kyle Matteson, photos by Jeff Rutherford)
• Laura Stevenson, I’m your biggest fan in the whole Triple Rock Social Club, except maybe for tht one guy who was leaning up against the monitor and pumping his fist (review and photos by Jay Gabler)
• Hunx and His Punx at the 7th Street Entry: “No, don’t stop!” (review and photos by Stacy Schwartz)
• Are Marshall Cretin the best thing to happen to rock music since electricity? (blog entry by Dwight Hobbes)
• Slightly Stoopid, Meat Puppets, and Honeyboy Carencro: Mixed genres blend well at First Avenue (review and photos by Jeff Rutherford)
• Is Lady Gaga’s “Americano” a genuine political statement or cultural appropriation? (blog entry by Lolla Mohammed Nur)
• Face to Face at First Avenue: Something new—but not too new (review by Kyle Matteson, photos by Jeff Rutherford)
• YACHT bring thrilling energy to the Triple Rock Social Club (review by Sally Hedberg, photos by Meredith Westin)
• A Nod to Bob 2: Red House Records dip back into Dylan’s deep well (blog entry by Dwight Hobbes)

• At the Minneapolis Institute of Arts, a Native American shirt with a story to tell (feature and video by Sheila Regan)
• Dream House: Photographer TJ Proechel looks at the Minnesota foreclosure crisis (blog entry by Paul Schmelzer)

• Wood from the Hood (blog entry by Jennifer Larson)