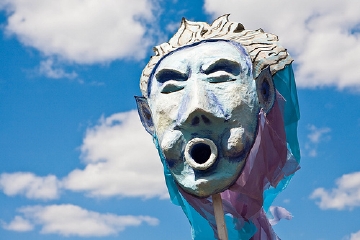 On the radar: It’s mayhem on Hennepin as cartoons come alive, with adult cartoons facing off against kids’ cartoons. Who will prevail? Based on seating capacity, the kids have the advantage of numbers—but adults are bigger and smarter and have more money.

Under the radar: The smell of ironic cuteness is also in the air Uptown, where boutique king Johnny Cupcakes (he of the cupcake-and-crossbones logo) will be at the soon-to-be-moved ROBOTlove for “the only stop between Omaha and Chicago” on his national suitcase tour. On offer will be free cupcakes from Cake Eater Bakery—and if there is one thing the Twin Cities cannot seem to get enough of in 2010, it is cupcakes from Cake Eater Bakery.

On the radar: Happy birthday to us! The Twin Cities Daily Planet was officially launched on May 1, 2006, and we’re celebrating our fourth birthday with a happy hour at T’s Place. Stop by for the company, the cake, the beer, and a sneak peek at the future of the Daily Planet.

Under the radar: Zenon Dance Company opens its spring season at the O’Shaughnessy. To see what’s in store, see our report on Zenon’s new piece by award-winning choreographer Morgan Thorson.

On the radar: It may not be May Day, but in Minneapolis it’s MayDay as In the Heart of the Beast’s annual parade winds its way through Powderhorn Park. I’ll be making a cameo appearance in the parade this year, as part of a flag-twirling troupe.

Under the radar: The windowfront Shoebox Gallery, Minneapolis’s smallest art gallery (and that’s saying a lot), returns to its roots with an exhibit by Jenny Schmid, the printmaker who was the first artist to be shown there. Festivities marking the show’s opening will include a “waffle intervention,” the unveiling and raising of a new POHO (Powderhorn Park) flag, and the performance of a sound poem by Flarf poet Elisabeth Workman.

On the radar: St. Paul’s national-champion Soapboxing team hold a Grand Slam face-off to determine which five poets will represent the Capitol City as the team defends its title at the 2010 National Poetry Slam—which, as it happens, will take place in their home town.

Under the radar: Farmers Pat and Kelli Ebnet “literally raise poultry,” says the Red Stag Supperclub’s Web site. I’m not sure how elevation improves the chickens’ eventual taste, but you can ask the Ebnets about that when they visit the Red Stag tonight for a farmers’ dinner that will include chicken liver mousse, smoked chicken angliotti, grilled duck breast, and—but of course—braised gizzard.

On the radar: It’s getting balmier in Minnesota, but we’re a long way from South Pacific weather. All the more reason to escape to the Ordway for a production of the classic musical.

Under the radar: The new band fronted by Eddie Argos trades exclusively in songs written as answers to famous pop songs. (For example, “Billie’s Genes”: “The 1980s were a wild and crazy time/ And having fun is not a crime/ But considering the way that you behaved/ You’ve probably got more children than Screaming Jay.”) Like Argos’s first band, Art Brut, it sounds like a gimmick—until you hear it. Everybody Was in the French Resistance…Now! are at the Turf Club…now!

On the radar: When Kate Nash last played Minneapolis, almost exactly two years ago with the Trachtenburg Family Slideshow Players opening, I dubbed it “unofficial cute night” at First Ave. “A family act featuring a keyboard-pounding dad, a tambourine-slapping mom, and a 14-year-old daughter on drums? Cute. A 20-year-old British redhead in platform heels who coos lyrics about beautiful birds in front of a pink neon sign bearing her name? Cuter. An encore uniting the two acts for a rendition of the Supremes’ ‘Baby Love’? Cutest!” The cute overload continues tonight: Nash is again headlining the Mainroom, and the opener is the new teenage-girl band fronted by that very same young woman, Rachel Trachtenburg. The new band’s name? Supercute! (I’m not just saying the band’s name is supercute, I mean it’s actually Supercute! With the exclamation mark. Seriously.)

Under the radar: Rice Park, in downtown St. Paul, is one of the jewels of the Cities—”One of the great urban spaces in the country,” my dad likes to say—but how much do you really know about the park and its environs? Free tours of the park and its surrounding buildings start today and continue throughout the summer.

Dick Bernard tells the tale of his encounter with Soul of a Citizen author Paul Loeb, and David Zander reports on the launch party for Here: A Visual History of Adopted Koreans in Minnesota. Bryan Thao Worra reports that Minneapolis Lao-American artist Mali Kouanchao is the subject of a new children’s book, and Rich Broderick praises our blogger Emilio DeGrazia’s new book Walking on Air in a Field of Green.

There’s a new international Hmong filmmakers’ association: Tom Laventure has the story. Meanwhile, Jim Brunzell and Erik McClanahan continued their series of MSPIFF guides, and Jim headed off to the Empire State for the Tribeca Film Festival.

In reviews this week, Crystal Erickson reported on Major Lazer’s First Ave madhouse as well as on an “awkwardly intimate” BLB show by Rachael Cantu and Garrison Starr. Dwight Hobbes enjoyed Alicia Wiley‘s new material, and I had similar praise for new songs by Gogol Bordello. Looking to future shows, Caitlin Burgess has the lowdown on Cinco de Mayo and I talked with Vicki Peterson of the Bangles—who will be at the Fine Line on Thursday.

Alan Wilfahrt continues his series of pictorial previews of HOTB’s MayDay celebration. In reviews, I enjoyed Saburo Teshigawara’s masterful performance at the Walker and the chilly but redemptive Who’s Afraid of Virginia Woolf? at the Jungle, while Sheila Regan joined in the critical chorus of plaudits for the Guthrie’s M. Butterfly.