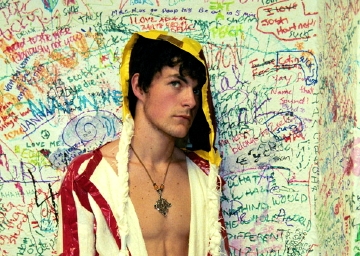 A production photo from Trampoline, a preview of which is screening this week.

On the radar: “In the 80s,” reads the promotional copy for Our Way: Johnson and Rydberg, Myron Johnson and Mitch Rydberg “were the Diaghilev and Stravinsky of Minneapolis.” A little grandiose? Sure, but come on: this is dance!

Under the radar: Okay, now that the 90s are two decades past, can we get started with the ska revival revival? Please?! The English Beat and Fishbone are ready and rarin’ to go, which they’ll prove tonight at the Cabooze.

On the radar: Names in musical theater don’t get much bigger than that of Stephen Sondheim, who will be at the State Theatre tonight chatting with Star Tribune theater critics Graydon Royce and Rohan Preston. Names in unsettling fantasy don’t get much bigger than those of Lewis Carroll, Tim Burton, and Johnny Depp, all of whom are involved in the a certain movie opening today in 3D IMAX nickelodeons across the country.

On the radar: The Twin Cities will be well-represented at South by Southwest, the annual showcase of music (and other media) in Austin, Texas. Several local bands heading down South are playing a warm-up show tonight at First Ave. Down at the Orpheum, Late Night host (and, as his PR blurbs weirdly continue to mention, one of 2002’s 50 Most Beautiful People in the estimation of People Magazine) Jimmy Fallon will be cracking wise.

Under the radar: It’s life during wartime, and love among the literati, tonight as A Report on the Banality of Love opens at MJTC. If the title alone doesn’t get you hot and bothered, wait ’til I tell you that it’s about a passionate affair between Martin Heidegger and Hannah Arendt! If that doesn’t get you hot and bothered, this play may not be for you.

On the radar: Heyo Oscars! If you’re looking for somewhere other than your living room to watch the awards ceremony, the Academy officially suggests that you attend the Aegis Foundation benefit bash at the Hotel Ivy. Whether this is an enticement or a warning, Lori and Julia of purple-billboard fame will be among the many local celebs on hand.

Under the radar: “Scotland is pwned,” bodes the promotional text for Macbeth: The Video Game Remix.

On the radar: TORCH is promising a showcase of diversity in the arts tonight at the Colors of Minnesota event, and they’re not kidding: yoga, henna, haiku, opera, you name it! Speakers include photographer Wing Young Huie and Emma Berg, and there will be a fashion show styled by Jahna Peloquin of our media partner Le Petit Conaisseur de la Monde.

Under the radar: St. Paul poet laureate Carol Connolly is normally a Commodore kind of gal, but tonight she’ll be slamming it on the Mississippi’s wild west side with Cynthia French, Leslie Ball, Courtney McLean, and Allison Boreen in a send-off event for French’s trip to represent Minnesota at the Women of the World Poetry Slam in Ohio. With the suds flowing and DJ Bonnie Rotten at the tables, the lady from Pig’s Eye will be singing along to “Suck a Ring” before you know it.

On the radar: The touring production of Mamma Mia is opening tonight at the Orpheum. On a normal Tuesday night, that would make it the biggest show in town—but this is no normal Tuesday night. Until something is staged at the Metrodome, the record for biggest audience at any single theater performance will go to Tyler Perry’s Madea’s Big Happy Family, starring (yes) Tyler Perry as (yes) Madea. It’s at Target Center, and without apparent irony its promoters say that it’s “guaranteed to be the best show ever.”

Under the radar: Coincidentally, Madea’s favorite themes—”the hollow decadence of American society, and the struggle between true love and the love of money”—will also be explored in a U of M student production of The Debutante, a one-act production dramatizing a text by F. Scott Fitzgerald. Its producers don’t guarantee that it will be the best show ever, but admission is free, so you’re risking 67 fewer dollars than you are on Madea.

On the radar: I thought I was digging deep into the vaults of local music when I DJed at Grumpy’s last month, but I missed this one: the Trapezoids’ 1981 “Yellow Meat” (b/w “Free Milk”). The mystery men of Minnesota new wave have reunited, and tonight at the Entry they’re headlining what’s being billed as a “Twin Cities New Wave Celebration.” Iron those black jeans!

Under the radar: Filmmakers Rolf Belgium, Mark Wojahn, and Emily Goldberg—all McKnight fellows—will be showing excerpts from their new work tonight at Open Book. Particularly intriguing is Wojahn’s in-progress documentary Trampoline, the story of a Minnesota family whose life is “a roller coaster of teen parties, third-degree burns, unemployment, drugs, and marital strife.”

Barb Teed is in Hollywood, preparing to report for the Daily Planet from a backstage perch at the Academy Awards. This week, she filed stories on the Academy’s newfound savviness with social media and on where the biggest Oscar parties are happening in Minnesota. Meanwhile, Jim Brunzell reports on his conversation with Katie Aselton, writer/director/star of Sundance favorite The Freebie.

Melissa Slachetka and my aunt Betsy were blown away by, respectively, Shidara and a Duke Ellington tribute at the Ordway. If Dwight Hobbes wasn’t quite blown away by Art Vandalay at the 501, he was certainly enjoying the show—until he got kicked out. At Lee’s he made it through an entire set by Frank Brownstone and Associates, and he was glad for it.

I enjoyed watching a “new breed” of Minneapolis theater artists strut their stuff at the Southern, and Becca Mitchell was both affected and enriched by the History Theatre’s new production of Hiding in the Open. Bev Wolfe was a little less affected and a little less enriched by Theatre Latté Da’s Violet at the Guthrie, and Sheila Regan was outright bored by Mixed Blood’s Somebody/Nobody.

I had a sneak peek at Abstract Resistance, the Walker’s major new show, and was a little nonplussed—but then, it has a couple of tough acts to follow. Also this week, Mason Riddle reports on The Sylvan Screen, a new joint exhibit by Rich Barlow and Regan Golden.

Robin Sauerwein talks with the proprietor of Amici Pizza & Bistro, the new establishment opening in the former Snap! space up Northeast. Also, Amy Rea—going out on a limb!—sings the praises of Surly Brewing Company.