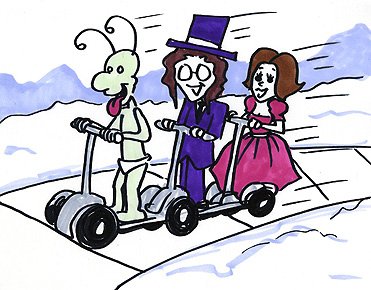 Philo and friends on a Segway built for three.

On the radar: If you’re going to choose a single year to spotlight in a museum of contemporary art, 1964 is the year to choose. Abstract expressionism had just peaked, and pop, conceptualism, minimalism, and other post-modern movements were about to come crashing in—not only changing the rules, but arguably deleting the rules, once and for all. The Walker’s exhibit 1964 opens today with a talk by curator Siri Engberg.

Under the radar: Is journalism dead? Obviously not, but that thing that was once called “journalism” is looking pretty green around the gills these days. Tonight at Open Book, the Twin Cities Daily Planet presents journalism gurus Bob McChesney (founder of FreePress.net) and John Nichols (of The Nation) as they discuss their vision of how journalism can transcend its current woes and become, in the process, more informative and democratic than ever.

On the radar: AIGA Minnesota, the local organization for design professionals, will be showcasing the year’s best design work tonight at the Walker.

Under the radar: Owning your means of production is nice, except for when the works go kablooey and you have no bourgeois boss to pick up the tab. Tonight at the Turf Club, acts including the Honeydogs, Molly Maher, and the Mad Ripple play a benefit show for Jenn Barnett, a local photographer who’s recently found herself up a creek without a camera.

On the radar: If you still have that Van Gogh poster Blu-Tacked to the wall after today, there’s really no excuse. Aesthetic Apparatus is celebrating its “double-toothpicks” birthday (as my aunt Nonie would say) with a $5 poster sale and free party, featuring music from The Blind Shake and Beatrix Jar.

Under the radar: Tonight at the Soap Factory, TalkingImageConnection—an organization run by past Daily Planet contributor Alison Morse—is hosting a reading/dance event in connection with the Land of Milk and Honey multi-hued semi-fictional ironi-topia now being showcased there. Readers include Heid Erdrich, Geoff Herbach, Andy Sturdevant, and Jen March; Sarah Jacobs will dance. On your way there, stop by First Amendment for a first look at Jennifer Davis’s new work on paper.

On the radar: It’s closing night for the St. Paul City Ballet’s first-ever foray across the river. In Reimaginings, the company presents new work as well as excerpts from the ballet Raymonda.

Under the radar: The Minnesota Landscape Arboretum is hosting what you might call a “pancake feed,” featuring all-you-can—excuse me, all-you-care-to—eat pancakes covered in maple syrup straight from the trees. Curious types are invited to venture out for a postprandial stroll in the arbor, where you can see how the syrup was drawn. (Or just go home and take a nap, lying to yourself about how you’re going to go back and reread Little House in the Big Woods.)

On the radar: Power couple Andrea Swensson (music editor at City Pages) and Ben Clark bring their MP3-laden laptop to Grumpy’s NE tonight for Minnesota Music Monday. Ask them how they got lost in the middle of the night on the back roads of Oklahoma in a van with Solid Gold.

Under the radar: Monday nights on MTN now feature two back-to-back shows created by members of the Freaky Deeky family. At 9:00 it’s the brand new Show and Tell Show and Tell, in which Ashley Sierra and Eric Zuelke psychoanalyze Minneapolis children on the basis of the children’s modest possessions. At 9:30 it’s Philo, a call-in show in which a comic book materializes in front of your eyes and the hapless title character is utterly at your whim.

On the radar: Those who enjoyed the Noël Coward songs featured in Brief Encounter will want to see Coward’s Women, a musical revue produced by Production House (what?) and opening tonight for a brief run at the Guthrie.

Under the radar: Hefting a shovel along with her accordion, Simone Perrin channels Hedy Lamarr in a show co-written with Kevin Kling. As though any further confirmation were needed, the Tom Waits allusion in the capsule summary of The Secret Life of Hedy Lamarr seals the deal—this is going to be a weird one.

On the radar: From the buzz on Twitter, it sounds as though pretty much everyone who had ever seen, heard, or even heard of Janelle Monae bought a ticket to her show tonight at the Varsity as soon as tickets went on sale. Is she the next Lady Gaga? If so, the next time she comes through town tickets including fees will be over $100, so if in doubt you might want to bet on catching her tonight for $12.

It was an eclectic week in our book coverage, as Maxine Lightfoot offered a paean to the St. Anthony Park Library, “the best place in the world” (!); Steve Trimble profiled three Jewish writers who grew up in St. Paul; Amy Doeun recommended a book on Making Brothers and Sisters Best Friends (good luck with that); and Jackie Alfonso sang the joys of Roy Blount, Jr.’s Alphabet Juice.

Lauren Ernt previewed an April 5 concert at the O’Shaughnessy to benefit the Nonviolent Peaceforce and Dwight Hobbes sang the praises of Courtney Yasmineh’s new album, but the big news in local music this week was South By South music festival—despite the fact that it took place in Texas. Carl Atiya Swanson and photographer Stacy Schwartz were on the scene, filing daily reports:
• Day 1: Hipster heirarchy, a mechanical bull, and a party with Metric
• Day 2: Creativity amidst chaos with Frightened Rabbit, City on the Make, and the Carolina Chocolate Drops
• Day 3: Geeking out with Peter Wolf Crier, Dawes, Delta Spirit, and Sondre Lerche
• Day 4: Too much love with Sharon Jones, Hole, Raphael Saadiq, and Smokey Robinson
• Day 5: Chilling out with Minus The Bear, The Drums, and Electric President

Will street food finally come to Minneapolis? The mere possibility of such a thing was the talk of the town this week, and Sheila Regan was at a standing-room-only City Council hearing on the subject. Meanwhile, drama was afoot at one of the city’s most venerable brick-and-mortar establishments: in the view of the Minneapolis Labor Review, Murray’s has “stabbed its employees in the back with one of those silver butter knives.” All Amy Rea wanted to do was enjoy a “nice satisfying lunch” at Spoonriver—and she did.