On the radar: This year everyone (including us) had the same bright idea to live-tweet the Oscars, and by general consensus of the Twittersphere, the winner was comedian Patton Oswalt, dropping observations like “Daniel Day Lewis has the depth of commitment to the craft of acting to die just to liven up next year’s death montage.” Oswalt is at Acme Comedy Co. tonight—and needless to say, it’s sold out.

Under the radar: If you enjoyed Girl Talk at First Ave—and who didn’t?—then hit the Varsity tonight for mad mashup-maker Hood Internet.

On the radar: It’s a big night for local music on Cedar Avenue. In what’s sure to be one of the most barn-burning hip-hop shows of the year, charismatic Pacific Northwest MC Astronautalis shares the Triple Rock stage with Doomtree’s Sims, who’s been on a roll with his new record Bad Time Zoo. At a much lower BPM, across the street at the Cedar Justin Vernon’s pre-Bon-Iver project Volcano Choir make a very rare live appearance.

Under the radar: Having premiered its epic new work Yathra (Journey) at the Kennedy Center in Washington, D.C., our local world-class Indian dance company Ragamala performs the piece at the O’Shaughnessy in St. Paul.

On the radar: “There are a lot of things wrong with Chan Poling’s new musical Venus,” I wrote in 2009 as the opening of one of the most negative reviews I’ve ever published—but Poling is now collaborating with Flying Foot Forum, and tonight at the Guthrie I’m going to give him another chance.

Under the radar: Tonight at the Kitty Cat Klub, Menergy channels the panther blood that Mark Mallman and VJ Time Squid share with Charlie Sheen.

On the radar: When I joked about receiving a jump-drive press release (in tiny shopping bag, no less) about the annual Macy’s Flower Show, my boss Jeremy Iggers assured me that the show is no joke: “It’s really quite extraordinary.” Jeremy’s seen a lot of extraordinary things, so I’d take his word for it.

On the radar: “In punk years, that makes him a sequoia,” writes Vanity Fair about Henry Rollins’s 50th birthday. Actually, Rollins has been a sequoia his entire life: a rock-hard tower of punk. He’s at the Cedar tonight, with a spoken-word show appropriately called “50.”

Under the radar: Back in town after recording and touring behind their new record—including a stop at SXSW—my friends Bella Ruse play a free set at Barbette.

On the radar: I have little idea what Stomp is, except that it’s a bunch of people making a colossal racket. Cool.

Under the radar: There’s a battle of the bands going down at Big V’s; among the acts slated to perform are hip-hop trio the Vagilantes (below). How can this not rock? 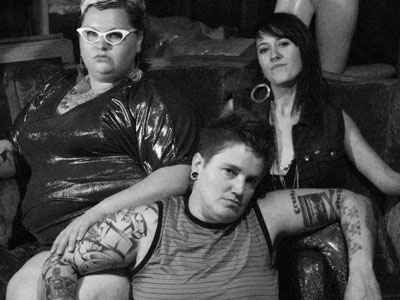 On the radar: As befits her surname, the writing of Joyce Carol Oates is substantial, smart, and good for you. Tonight, she reads at the Minneapolis Central Library.

Under the radar: Honey’s second summer as a venue is looking to be even more hopping than its fun first: tonight, the DJs and all-around troublemakers of WAK LYF are inaugurating a new weekly Wednesday night dance party at the underground lair.

• At SteppingStone Theatre, Get Up Your Irish tells the story of Irish immigration to Minnesota (feature, photo, and video by Deb Pleasants)
• Theatre Pro Rata’s Dido, Queen of Carthage at Gremlin Theatre: Every god needs a BFF (review by Betsy Gabler)
• At the Children’s Theatre Company, Barrio Grrl! is fierce fun (review by Courtney Algeo)
• Goats by the Minnesota Jewish Theatre Company: A whack in the back of the head with the metaphor broom (review by Katie Sisneros)
• Live Action Set’s 7-Shot Symphony weaves a magic spell (review by Matthew A. Everett)

• Ana Voog and the anacam: “At the core of all of us, we really just want to be seen” (interview by Sheila Regan)
• Navigating the effects of the Iraq War (feature by Lydia Schwartz)
• A highway divided, but it didn’t conquer. What is a Bridge? New community project in Phillips West (feature by Dallas Johnson)
• MCAD wants YOU…to fight over Flavor Flav (blog entry by Jay Gabler)