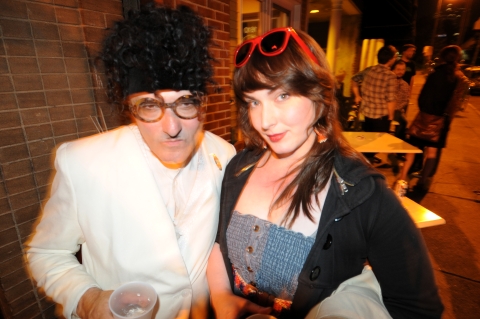 Local icon Scott Seekins takes in a Nick & Eddie Wednesday in May 2010. Photo by Jay Gabler.

On the radar: Having won lots of fans locally (not, however, including Dwight Hobbes), Sophia Shorai made a splash on the national scene earlier this month by wowing the American Idol judges. Her gig tonight at the Dakota is likely to be packed.

Under the radar: What would it sound like if Björk recorded an album with Beach House? The answer is Braids, and the answer sounds great. They’re at the Entry tonight with Baths and Houses; apparently Beds and Beyonds weren’t available.

On the radar: On their new record Outside, local heroes Tapes ‘N Tapes trade the bristling sound of The Loon and Walk It Off for a more eclectic, pop-friendly texture—but they’re hardly going soft, as they’ll demonstrate tonight at First Ave.

Under the radar: T.C. Boyle, the perpetually restless wild child (still, at 62) of literature, appears tonight at the Minneapolis Central Library.

On the radar: “A new play about the science of life and loss, the relationships between fathers and sons, Cambodian fields, Bolivian rainforests and redemption.” I just wasn’t sure I was quite ready for that, so Christopher Kehoe will be reviewing Theater Latté Da’s Song of Extinction for the Daily Planet. The award-winning play makes it regional premiere tonight at the Guthrie Theater.

Under the radar: Did you know that there’s a Minnesota Peony Society? There is, and today they’ve declared “A Day to Celebrate Peonies.” Because why the heck not. Events at Bachman’s on Lyndale include a floral design seminar, a peony culture seminar, and a social that only lasts 30 minutes because this isn’t about you and your problems—this is about the peonies.

On the radar: It’s Oscar night! I’ll be at The Tangential world headquarters, live-blogging and fielding phone calls from Daily Planet writer Barb Teed, who will be backstage at the Kodak Theatre. The official local Oscar night party is going down at the Hotel Ivy.

Under the radar: Another good Oscar night bet is The Depot Tavern, which is distributing First Ave tickets to reward those who guess the winners most accurately.

On the radar: Word on the Twittersphere has it that Mondays are the new Wednesdays at Nick & Eddie, but with a younger crowd. So if us 30-somethings have been freaking you out, stop by tonight for a show by the Moonstone Continuum.

Under the radar: Local opera does not begin and end at the Ordway. Well, it may begin at the Ordway, but then it heads to the Red Stag and subsequently stumbles down to the Front.

On the radar: News graphics are like fonts: taken for granted by 99% of the population and completely nerded out on by the other 1%. If you’re in that one percent, you won’t want to miss tonight’s appearance at the Walker by Kevin Quealy of the New York Times Graphics Department. (If you’d rather not pay $20, or if you’d rather watch naked, you can see the talk streaming live on the Walker’s website.)

Under the radar: Sometimes, it’s a struggle to decide what to recommend in this space. Other times, it’s easy. Today is one of those latter days: at the Ritz, see a selection of locally-made short comedy films for free.

On the radar: Johnny Cash, Emmylou Harris, Bob Seger, Crystal Gayle, Wynonna Judd, Joe Henry—Rodney Crowell has worked with them all, but he may be best-known as the ex-husband of Rosanne Cash, collaborating with her on the material that made her a star in her own right. He’s at the Cedar tonight, and the gig will be worth seeing for the stories if nothing else.

• Books & Bars selection One Day by David Nicholls: A most unconventional romance (review by Courtney Davison)
• An evening in celebration of John Berryman, a great poet and a great teacher (feature by Robert O’Connor)

Movies
• Academy Awards and social networking: Where the Oscar comes to you (feature by Barb Teed)
• Cedar Rapids: More enjoyable than a trip to the actual Cedar Rapids (review by Emily Weiss)
• “And the Oscar goes to…” New glam announcement envelopes and cars designed (feature by Barb Teed)
Music
• Kronos Quartet surprise, unsurprisingly, at the Walker Art Center (review by Kate Gallagher)
• Jeremy Walker of the Small City Trio: “There is always something to improve on and discover” (interview by Dwight Hobbes)
• Justin Townes Earle at First Avenue: “I know better, but sometimes I just don’t care” (review by Natalie Gallagher, photos by Mandy Dwyer)
• Party for Life Session 2 to benefit ailing singer-songwriter Michael McElrath (interview by Dwight Hobbes)
• Tennis at the 7th Street Entry: 20-something love (review by Sarah Heuer, photos by Jay Gabler)
• Old 97’s and Those Darlins storm First Avenue (review by Jay Gabler)
• Are you sure this is how Richie Havens got famous? Part XI: To stone or not to stone (blog entry by Dwight Hobbes)