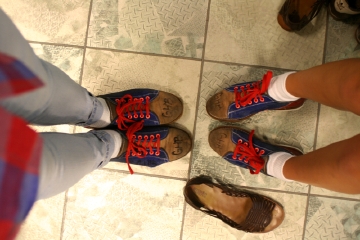 On the radar: Music + comedy skits = success! Who woulda thunkit? Oh, wait…anyway, MPLS.TV is locally-made and most weeks it’s a better time than SNL. Tonight its creators are throwing a benefit bash at Bedlam featuring Guante, Zoo Animal, and other fine acts.

Under the radar: The last show mounted by the Off-Leash Area in their garage theater was 2008’s The Jury; tonight, OLA opens an expanded version of that powerful production—featuring text by cultural critic and naughtybilly jug-blower Max Sparber—at the Red Eye Theater.

On the radar: Ads for the Masters are already appearing on TV and Stravinsky’s Rite of Spring was just heard at Orchestra Hall, but spring still isn’t close enough for baseball fans looking forward to the Twins’ 50th season in Minnesota and first season at Target Field. At this weekend’s TwinsFest, you can revisit the Dome to hang out with players, browse memorabilia, and—are you ready for this?—audition to sing the National Anthem at one of this season’s games. Among the past players scheduled to be in attendance is World Series pitcher Juan Berenguer, whose “Berenguer Boogie” compares favorably to Prince’s new Vikings anthem.

Under the radar: Two stereotypes about Sweden are that the country (a) has amazing women and (b) has amazing designers. In one fell swoop, the Swedish Institute proves both of those stereotypes absolutely true with an exhibit, opening today, of superlative design by 17 Swedish women.

On the radar: The late (so we thought) great (so we know) local band Love-Cars take the stage at the Triple Rock for their first show anywhere since 2007. Could a new album be in the works?! Don’t push it.

Under the radar: If you’re into that kind of thing, there are many opportunities to get out and “enjoy” the cold today. The Art Shanties are still on Medicine Lake, the annual Art Sled Rally is happening at Powderhorn Park, the St. Paul Winter Carnival is still raging, the “world’s coldest game of baseball” is being played at Midway Stadium, there’s a Polar Bear Picnic (you know…for kids!) at Lowry Nature Center, and the local gendarmes are leading a plunge into White Bear Lake to benefit the Special Olympics.

On the radar: Uncle Tupelo’s Jay Farrar and Death Cab For Cutie’s Ben Gibbard don’t seem like the most obvious bedfellows (compared to, say, Mick Jagger and David Bowie), but Jack Kerouac has brought them together. Tonight they’ll be at the Varsity singing songs from their new album inspired by Kerouac’s 1962 novel Big Sur.

Under the radar: The number of people who find their pulses pounding at classical music news is somewhat smaller than the number of people who get excited about pop music news, but those people who do follow the local classical scene are getting quite excited indeed about Accordo, a new chamber-music group comprising principal players from the Minnesota Orchestra and the St. Paul Chamber Orchestra. They’ll be at the Southern tonight playing music by Stravinsky, Ravel, and Debussy.

On the radar: Twin Cities teens are among the baddest young spoken-word artists in the country, and tonight at the Capri they’ll be battling head-to-head for a chance to fly to L.A. to represent Minnesota in the international Brave New Voices poetry slam.

Under the radar: It’s Monday, so that must mean it’s board game night at the CC Club, with drink specials from 4 p.m. to midnight to lubricate the action. It’s just like the Chatterbox, only a little rowdier—if you buy Broadway in Monopoly, you may be offered a trade package including $500, Marvin Gardens, and not getting punched in the mouth.

On the radar: Does “grand diva” Bettye LaVette have more soul than Hopkins can hold? Tonight we’ll find out, but I’m leaning towards yes.

Under the radar: Surly releases its first British-style session beer with a party tonight at Grumpy’s NE. Nasty mass-produced light beers have made “drinkability” a dirty word, so to describe their new brew, Surly prefers the term “drinkinability.” Can “drankability” be far behind?

On the radar: Imagine a local TV game show called Bowling for Dollars, where contestants shoot for big prizes including cash and coolers. Sound awesome? It was. The show ran from 1973 to 1978, and tonight the program’s host Tom Ryther visits the BLB for a trip down memory lane. After Ryther’s presentation, featuring stories and clips from the show, everyone will hit the lanes.

Under the radar: Jazari, Minneapolis’s newest band, makes its debut tonight at a mysterious space in Whittier. So? New bands are formed all the time. What’s the big deal about this one? Well, not much, except that all its members are robots.

Jim Brunzell’s off to Sundance, and he left us with a preview of the films he’s most looking forward to—including a few promising Minnesotan entries. Closer to home, the Walker has begun its annual Expanding the Frame film series; Lydia Howell has the scoop on what to see.

Jon Behm reports on a very low-key Varsity show by Bowerbirds and a packed Fine Line disc release show by Dessa, while Dwight Hobbes goes on the hunt for some of his past favorites who’ve been MIA from the local scene. As for me, I ran across town to catch the Minnesota Orchestra and the St. Paul Chamber Orchestra joining forces for The Rite of Spring.

In reviews this week, I took in Park Square’s ambitious epic Rock ‘n’ Roll while Sheila Regan was delighted by CTC’s Mr. McGee and the Biting Flea. Also this week, Katie Kaufmann replies to Sheila’s review of her play Everything Must Go with a blog entry explaining why getting new work on stage isn’t always the easiest (or cheapest) thing to do. Finally, Jeanette Fordyce talks with Off-Leash Area’s Jennifer Ilse about the company’s new production of The Jury.

Jeremy Iggers gives a thumbs-up to Samba, the new restaurant rising from the dust of a “gastro-neutron” bomb that seemingly wiped out every eatery (even Burger King!) in Hopkins. Slightly less new—but just as good, says Amy Rea—is The Anchor Fish and Chips in Northeast Minneapolis.