On the radar: The beavers say that Boreas is on the move.

Under the radar: Tonight on The Office, Ricky Gervais makes a guest appearance as David Brent, the character in the original UK series who inspired Steve Carell’s character in the American series. If there’s a dance-off, Carell’s going down.

On the radar: On Christmas Eve, the Grinch, or one of his minions, broke into Eric Lovold’s apartment and stole about $25,000 worth of music equipment. Tonight, you—yes, you—have a chance to help right the wrong, and hear some great music in the bargain. Lovold’s band the Alarmists headline a benefit show at the Varsity that also features White Light Riot, Chris Koza, Kicks & Spurs, and Brian DeRemer, with Solid Gold at the turntables.

Under the radar: I used to live in Somerville, Massachusetts, down the street from an establishment called Acme Ice/Dry Ice. They sold not only cubes and chunks, but also specialty items including booze luges. I had to research exactly what a “booze luge” was, but I didn’t have the chance to open my mouth at the bottom of one until a tailgate party at the 2004 Harvard/Yale football game. I wasn’t sure when or where I’d next encounter a booze luge, but I did not guess that it would be tonight, and I did not guess that it would be at the Walker Art Center.

On the radar: “Avoid the Grey” is the name of Cliche’s fashion show and designer clothing sale, which was so wildly popular last year that they’re running it three times in succession today—and one of the three slots has already sold out.

Under the radar: In a strange but perhaps not entirely surprising legal brouhaha, Mark Mallman’s band Ruby Isle has put its song-for-song cover of Guns N’ Roses’ album Appetite for Destruction on sale, then pulled it from sale, and now finally (at least as of this writing) just started giving it away for free. In this context, it’s hard to know exactly what “CD release” is going to mean, but tonight’s show is gonna rule.

On the radar: If the new material Gary Louris played at First Ave’s anniversary party in December was any indication, the Jayhawks are coming back with a bang.

Under the radar: Amazing creations will cascade down the slopes of Powderhorn Park at the annual Art Sled Rally.

On the radar: Political repression in Belarus has included the imprisonment of the members of the Free Belarus Theatre. Theater companies around the world are presenting the company’s newest play Being Harold Pinter to raise awareness of the company’s plight. Tonight, members of Bedlam Theatre, Frank Theatre, and others perform Being Harold Pinter at Park Square Theatre.

Under the radar: “Many bands TBA” are performing at Memory Lanes tonight as a benefit for the Mars Bookstore. What’s the Mars Bookstore? According to Memory Lanes booker Tom Burt, “I don’t have real specifics about the book store, but it’s going to be along the lines of Arise!, a radical infoshop. The show is to help them make some money for a permanant space.” You may or may not want to give these people your money.

On the radar: What touring musical is being promoted by the green ears sent to us by the Hennepin Theatre Trust, as modeled here by Katie Sisneros in the Playatta Portal at Recess? 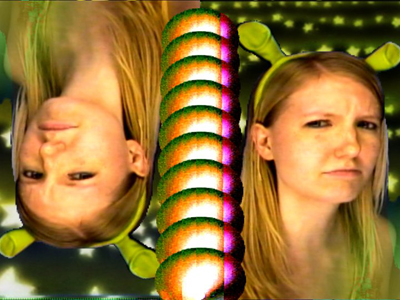 Under the radar: Everyone loves a good exploitation film—except the people being exploited. Actually, often they love it too. So then what makes it exploitation? Get to the bottom of these thorny issues, and see some hot T&A, tonight at the Trylon.

On the radar: Sound Unseen presents the 2010 documentary Coming Back For More, a film about the uncategorizable pop music legend Sly Stone that features Stone’s first filmed interview in over two decades.

Under the radar: Karen Yamashita’s novel I Hotel, about the Yellow Power movement that Booklist calls “the dawn of Asian-American culture,” was a finalist for the 2010 National Book Award. The novel was published by Minneapolis’s Coffee House Press, and tonight Yamashita will read from the book at Mixed Blood Theatre.

• Sidehill semantics (blog entry by Brian DeVore)
• Reading campaign gets to the heart of the heritage (feature by Margo Ashmore)
• And a wee dram on Burns night (blog entry by John Van Hecke)
Movies
• Nine foreign language films continue to Oscar race (feature by Barb Teed)
• Berlin’s Bonanza at the Walker Art Center: A five-screen salute to a one-horse town (review by Jay Gabler)
• No Strings Attached: Stereotypes in reverse are still stereotypes (review by Sarah Heuer)
• Community comes together to celebrate Oscar nominations (feature and photos by Barb Teed)
Music
• Carrie Elkin’s Call It My Garden is an unremarkable release from Red House Records (review by Dwight Hobbes)
• S. Carey at the Varsity Theater (photos by Meredith Westin)
• Trampled by Turtles prove fleet-fingered at First Avenue (review by Kate Gallagher, photos by Mandy Dwyer)
• Are you sure this is how Richie Havens got famous? Part X: It could be worser (blog entry by Dwight Hobbes)
• Leisure Birds and Lighted play the Triple Rock’s “Two Bands One Cup” (photos by Jeff Rutherford)
• Das Racist’s Himanshu Suri: “Why shouldn’t three colored people be able to be in a band that talks about race?” (interview by Becky Lang)
• Lissie at the Cedar Cultural Center: A small body for so much rock (review by Katie Sisneros, photos by Mandy Dwyer)
• “I want it to be relevant”: MJ Kroll’s music takes a turn (interview by Dwight Hobbes)
• Angélique Kidjo at the Ordway: Better than Springsteen (review by Betsy Gabler)
• Dessa plays to a packed house at the Cedar Cultural Center (photos by Jeff Rutherford)
• Ben Folds at First Avenue: Seen, heard, felt (review by Katie Sisneros, photos by Eric Petersen)
• Miranda Cosgrove at the State Theatre: Super duper cheesy, but at least she can sing (tweetcap and photos by Stacy Schwartz)