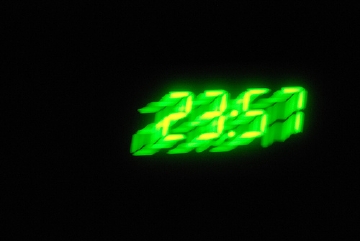 On the radar: I still have the engraved champagne flutes from the inaugural Crystal Ball in 2006, which featured a complete cover of the Purple Rain album and a choreographed performance set to DJ Boss’s “Dance with the Devil,” after which the angels and demons strolled over to the bar for shots and the rest of us tried to make our way home in the blizzard. The New Year’s event is all grown up, and tonight’s edition features music from The New Congress and a fashion show emceed by Project Runway contestants Rámon Lawrence-Coleman and Christopher Straub. Meanwhile, the hipsters will be at Mark Mallman’s Varsity show and the youngsters will be at the Mall of America for a live performance by Tom Kenny—better known by his cartoon name, SpongeBob SquarePants.

Under the radar: The Scrimshaw Brothers’ New Year’s Eve Comedy Workout hasn’t even started, and it’s already funny. A quote tweeted from rehearsal: “You should never ask a woman if she owns a Thighmaster.”

On the radar: If you’re looking for some free art with an interesting pedigree, you’ll be up and at ’em early this morning (or late last night) to scout out one of the 40 paintings that will be sprinkled randomly about Minneapolis today as part of a project paid for by proceeds from the recent FEAST artfunding dinner.

Under the radar: If you’re nursing a hangover and want to feel real sober real quick, head to Bat Country—er, the Trylon—to take in Terry Gilliam’s brilliant adaptation of Hunter S. Thompson’s Fear and Loathing in Las Vegas. A hangover is rough, but you’ll be sober as a judge by comparison to Johnny Depp and his “Samoan attorney” Benecio del Toro. “There is nothing in the world more helpless and irresponsible and depraved than a man in the depths of an ether binge.”

On the radar: Schell’s is the second-oldest family-owned brewery in the U.S. (damn you, D.G. Yuengling of Pottsville, Pennsylvania!); the New Ulm brewery is now also the source of Grain Belt Premium beer. To celebrate its 150th anniversary—and the release of Hopfenmalz, its anniversary beer—Schell’s is sponsoring a bar crawl in its home town of New Ulm. Make it all the way through and get a commemorative t-shirt!

Under the radar: Inspired by a Jack Johnson song, 7-year-old Jackson Parrish of Eagan invented a meditation called “Two Hands for Peace”; word got around the yoga blogosphere, and now Parrish is slated to lead 2,000 people in a peace prayer meditation at a national gathering in New Mexico in June. Get a sneak preview of li’l Parrish’s peacemongering prowess today at the YogaSoul Center in his own home town. (Make a day of it with a free belly dancing class at 1:45.)

On the radar: Lots of DJs consider themselves eclectic, but how many promise classic rock, classic pop, hair metal, nu-country, Czech Gypsy music, and selections from a Broadway musical? Not so many. If you dare, step into Sauce tonight for what DJs Darlin’ Nikki and Fidel $$$$Flow point out is your last chance for early resolution-breaking before the work week begins.

Under the radar: In County Cork, women traditionally take Epiphany “off” and their male partners handle the housework while the ladies go down to the pub and get soused at an event known as “Women’s Christmas.” The holidays are no time for breaking traditions, least of all at Keegan’s. (And for women whose partners are female…well, the dishes can wait ’til Monday!)

On the radar: Bands duel to the death all the time at Big V’s, but tonight’s event is actually called “Duel to the Death.” Who will win? Mouth Babies? Mevissens? Vag? Bedroom Magic? Alphaomegasalad? With My Tiny Hands I Kill You? I don’t know, but you’d better bring a plastic tarp to protect yourself from the flying bodily fluids.

On the radar: The first incarnation of Mulligan Stu’s Do-Over Revue won raves and giggles last month; word has it that tonight’s sophomore installment will feature youthful follies including a short prose piece called “Ten Things I Hate About Life” as well as a Heavy Metal Scrapbook.

Under the radar: Brianna Lane’s been doing a lot of knitting, she informed the audience at last weekend’s Mad Ripple Hootenanny. Fortunately, she’s also been doing a lot of songwriting; hopefully she’ll air some of the new material when she plays tonight at the 331.

On the radar: Unquestionably the most prominent artist ever to get her big break opening for the Trachtenberg Family Slideshow Players, Nellie McKay is at the Dakota tonight. The songstress and multi-instrumentalist is on tour supporting her new disc of American standards.

Under the radar: Grab your bad bitch, take a shot of cocaine, and run to the Trylon for Johnny Cash Live at San Quentin.

I reviewed Janice Y.K. Lee’s debut novel The Piano Teacher, a tale of love and war (WWII, to be precise) set in Hong Kong.

Dwight Hobbes talks with premier gospel vocalist Tonia Hughes, and Bruce Cochran ponders the future of music south of 94 in the wake of the Uptown Bar’s demise.

We squeezed in a few last December-show reviews: I was disturbed (in a good way) by John Munger’s Nutbuster!!, my mom loved the Ordway’s Beauty and the Beast, and Crystal Erickson reflected on Green T’s reflection-provoking Tales of Rashomon. Tom Laventure also reported on local playwright Trista Baldwin‘s collaboration with Japanese playmaker Shirotama Hitsujiya. I wrapped things up with my list of the top ten local shows of 2009. Needless to say, it provoked controversy.