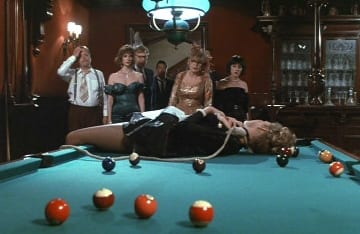 On the radar: Penumbra’s Black Nativity, one of the Twin Cities’ most joyous holiday traditions, opens A Season for Change tonight. This year, a number of Guthriegoers will surely be on hand to watch and listen for cast member Greta Oglesby, star of this spring’s acclaimed production of Caroline, or Change.

Under the radar: Doesn’t it just seem like you’ve been waiting all your life for a book about marauding Scythian armies that travel through time and rampage through the Twin Cities’ suburbs, with only a 16-year-old girl standing between us and the end of the world as we know it? Well, that book is here. It’s called Total Oblivion, and its author Alan DeNiro will be presenting it tonight at Common Good Books. Meanwhile, over in Minneapolis Intermedia Arts and Phillips Community TV will be celebrating their successful “marriage” at an event they’re calling “3V: Video, Victuals, and Vows.”

On the radar: You wouldn’t have seen Replacements bassist Tommy Stinson on First Ave’s stage at last weekend’s Replacements tribute, but he’ll be there tonight playing with Soul Asylum in their annual warm-n-fuzzy hometown gig. Then, come midnight, cult classic Clue will roll at the Red Stag. I’ll be there, in Professor Plum garb. “It’s just you and me, honey bunch.”

Under the radar: Al Milgrom, godfather of film in Minnesota, was in Berlin in 1989, and he has claimed he’ll be raffling off pieces of the Berlin Wall at “When the Walls Came Tumbling Down,” a film series remembering that fateful time and place.

On the radar: It’s been a big year for Doomtree, and the hip-hop collective are celebrating with their fifth annual “Blowout” at First Ave (conveniently, given the snowy weather, the afterparty is happening right down the hall at the Entry). Down the street at Lee’s, Trailer Trash are playing the first of their seasonal series of “Trashy Little Christmas” shows. If you thump the jingle bell pole and then slump to the floor, you won’t be the first one.

Under the radar: If you buy a copy of Laura Childs’s new Cackleberry Club mystery novel Eggs Benedict Arnold at today’s Once Upon a Crime release party, the author will donate a baby chick, via Heifer International, to a family in need. “Just think,” writes Childs in a press release, “a small flock of chickens for a family in Nicaragua or Tanzania guarantees a protein-rich food source, as well as income from selling eggs.” I wonder if that Tanzanian family will have any idea that their new little egg machine owes its presence at their doorstep to a novel about “three semi-desperate, 40-plus women” who leave their knitting nook to solve the mystery of a murdered mortician.

On the radar: From the Cabooze to the Xcel Energy Center in under three months: yet another record for Owl City, who will be at the X as part of an unsually lackluster lineup at the nonetheless sold-out Jingle Ball.

Under the radar: Punk poet Paul D welcomes Charlie Parr to the Turf Club stage for this week’s edition of the Riot Act Reading Series, with Mary Mack. No baby chicks; they’d be liable to get their heads bit off.

On the radar: See Commedia Beauregard’s Klingon Christmas Carol “for cheap or free” tonight with the donation of a can of food.

Under the radar: Two guys with links to the Daily Planet will be entertaining and delighting the Twin Cities tonight. In St. Paul, our blogger (and board member) Rich Broderick is hosting a Lowertown Reading Jam featuring music from the Fantastic Merlins’ Nathan Hanson. Meanwhile, our writer/photographer Jon Behm will be at Grumpy’s NE with Josh Keller, spinning a DJ set of local music.

On the radar: For today only, St. Paul establishments including the Ordway, the Science Museum, the History Center, the SPCO, and the Minnesota Opera will be selling a variety of tickets at half-price on raisethecurtain.org.

Under the radar: Priestess, Canada’s premier up-and-coming neo-metal band (take that distinction for what you will) are at the Entry tonight.

On the radar: Ballet of the Dolls director Myron Johnson is proud to have been called “the John Waters of ballet.” If you prefer Cry-Baby to Pirates of the Caribbean and Divine to John Travolta, your Nutcracker of choice is probably the Dolls’ Nutcracker (Not So) Suite, opening tonight at the Ritz.

Under the radar: On the other hand, you might be one of those people who think Christmas has become too commercial, too ironic, too detached from the true spirit of the season. In that case, you want to make your way to the Basilica, where Anonymous 4—one of the world’s top early-music vocal groups—will be performing Medieval and Renaissance holiday songs that will bring you about as close to God as you’re likely to get without snorting a line of frankincense.

Joe Pantoliano is in town this weekend to spread awareness about mental illness. His own clinical depression is chemical rather than social in origin, but the fact that his nickname is “Joey Pants” can’t help.

In reviews this week, I enjoyed Ike Reilly‘s pre-Thanksgiving blowout, Kid Sister‘s new album, the Minnesota Orchestra’s performance of Humperdinck’s opera Hansel and Gretel, and First Ave’s sprawling Replacements tribute. For his part, Jon Behm caught two sellout shows: The Big Pink at the Entry and Edward Sharpe and the Magnetic Zeros at the Varsity. Also, Dwight Hobbes recounts a night in which he missed seeing Junkyard Empire but enjoyed their music anyway; and talks with local music legend J.D. Steele about his work helping children in Africa as well as with avant-garde composer/performer Mike Olson about his new disc Incidental.

In other music coverage this week, Crystal Erickson talked with We Are The Willows’ Pete Miller about his new “musical map” of the Upper Midwest; and Raghev Mehta reports on the $90,000 worth of fines faced by Stadium Village bar Sally’s after it permitted the playing of songs like Bon Jovi’s “Livin’ on a Prayer” without paying the piper (ASCAP).

This week, Melissa Slachetka reviewed Sister’s Christmas Catechism at the Ordway (go, she says, if you’re Catholic and you don’t mind a little audience participation), Crystal Erickson caught Corleone at Gremlin Theatre (Shakespeare meets Puzo), and I enjoyed Theatre Arlo’s Golden Girls remix of A Christmas Carol as well as the acclaimed musical In the Heights at the Orpheum. In dance news, John Munger wonders why all the hubbub at the Walker’s Choreographers’ Evening.

Justin Schell presents video of the Talking Suitcases exhibit, showcasing (no pun intended) the stories of immigrant artists, at the Nash Gallery.