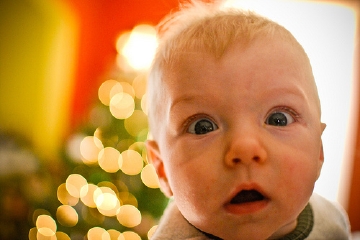 On the radar: Many Jews regard Christmas Eve as the best party night of the year—and there’s no reason Gentiles can’t get in on the fun too. The 501 Club hosts this year’s Jewbilee, featuring music from MC/VL and a free Chinese buffet.

Under the radar: In a very different kind of late-night holiday observance, the Cathedral of St. Paul is holding a festival of readings and carols at 10:45 p.m.

On the radar: If someone wrote that your band had “the most distinctive sound of any three-piece outfit since Nirvana,” would you actually quote that in your PR? The Bad Plus would, and the rambunctious jazz trio are sure to break many other rules of common decency in their three-night stand at the Dakota, which begins tonight.

Under the radar: It’s not just karaoke—it’s Staraoke. If you’re looking to escape charades with the family but still want to get up in front of a bunch of people staring at you with slightly glazed-over expressions and give it all you’ve got, make your way to the Triple Rock for Arzu’s annual mic party.

On the radar: Heiruspecs, Central High’s answer to the Roots, come Home for the Holidays—well, Minneapolis, close enough—with a Very Special Show at the Triple Rock, featuring openers Ill Chemistry.

Under the radar: Okay, all you trivia buffs beating your chests at Green Mill because you know which self-governing British dependency has a flag featuring a triskelion, it’s time to venture off the beaten path and see whether your suspension is up for the ride. Kwanzaa trivia will be part of the festivities at the Midtown Global Market’s daylong celebration of the African-American holiday. (In keeping with the spirit of giving, there will be prizes for everyone.)

On the radar: Each year between Christmas and New Year’s, the Oak Street Cinema screens Ronia the Robber’s Daughter, a cult-classic fantasy based on a story by Pippi Longstocking author Astrid Lindgren. This year is the film’s 25th anniversary, and a brand-spankin’-new print has been created for the occasion; it will be seen at the Oak Street for the first time anywhere.

Under the radar: Today’s your last opportunity to catch this year’s production of Penumbra’s acclaimed Black Nativity.

On the radar: For a while at an apartment I used to live in, we had a disc with Old Canes’ “Early Morning Hymns” in the shower CD player, and that song must have been played about three times a day for weeks. The band’s performance at the Triple Rock tonight is sure to be winning; they’re opening for Cornhusker rockers The Good Life.

Under the radar: You know that scene in Amelie where she wonders how many couples in Paris are having orgasms at just that moment, and decides the answer is 15? One might ask the same thing about how many pub trivia nights are happening in the Twin Cities on any given weeknight, and come up with roughly the same answer. Tonight, the hottest action is at Kings Wine Bar.

On the radar: There was a period of my life when I listened to a lot of Cities 97, and during that period they played Big Head Todd and the Monsters’ “Bittersweet” about once every 20 minutes. So I’m good, thanks, but you go ahead and enjoy yourself at the band’s First Ave show tonight.

Under the radar: It’s not just at the Ancient Traders Gallery where you’ll see top-notch Native art: this afternoon, there’s a gallery conversation at the MIA exhibit From Our Ancestors: Art of the White Clay People. (In MIA-ese, a “gallery conversation” is a docent-led tour. “You are encouraged to make conversation with the docent,” a staffer explains.)

On the radar: To tide us over between Zinefests, The Source is hosting a Mini Indy Comicon, with over a dozen freethinking comicmakers holding court. It’s a “highly rarified gathering,” says Source co-owner Dominic Postiglione in a press release that calls the local indy-comic scene “a virtual creative nuclear reactor.” God help us if there’s ever a meltdown.

Under the radar: What’s there to see at an arboretum under a foot of snow? The Minnesota Landscape Arboretum staff will show you, and they’ll give you some hot chocolate to keep you warm while they do so.

Holiday rush be darned, Amy Rea isn’t going to give up her literary scavenger hunt. This week we published her ninth (!) and tenth (!!) reports on that hunt.

Frances Gumm’s new disc is now available, just in time for holiday shopping; so is M.anifest’s new mixtape, though it’s not as suitable for giving—whoever’s on your list, they probably deserve a bigger splurge than what you’d spend on the blank CDa to burn copies of the rapper’s free release. For other stocking-stuffers from local artists, Dwight Hobbes recommends Joel Schaan’s album Acoustic and Alison Scott’s DVD Live at the Dakota. Also this week, Dwight talks with Doug Little of Afro-Cuban barnburners Seven Steps To Havana.

The holiday theater season is finally wrapping up, but I caught one of this month’s shortest-lived productions: Joseph Scrimshaw’s An “Eventually” Christmas at the Mill City Museum.