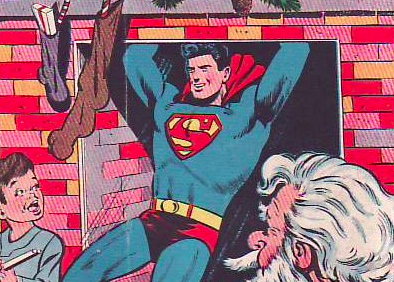 On the radar: Festivus, the generic December holiday created by Seinfeld‘s George Costanza “for the rest of us,” is celebrated tonight at the Nomad—complete with the requisite ritual Airing of Grievances, Feats of Strength, and hamloaf. (And music, by City of Sound, the Humbugs, I Like You, and Whipstitch.)

Under the radar: After moving to New York City, Bella Koshka’s Hilary Davis founded the first-ever officially-sanctioned spinoff of DJ Jake Rudh’s Transmission dance nights. Back for the holidays, Davis will take the turntables at Jetset for a night bearing the festively tubular moniker “Synthaclaus.”

On the radar: Normally, the party to top for those looking to get out on the town on a Christmas Eve Friday night would be Jewbilee—but it seems that’s off this year, so instead consider staying in (a movie theater) and catching Black Swan, a fantastic film in both senses of the word.

Under the radar: As an alumnus of St. Agnes School, I’ve been surprised to see advertisements for my alma mater‘s associated church in arts publications around town, complete with a glowing blurb from METRO magazine: “This choir rocks!” Well, METRO is right. St. Agnes is unique for its supurb choir, which sings a high Latin Mass every Sunday. You wouldn’t want to set your average Christmas-sweater church choir on Mozart’s Coronation Mass, but the St. Agnes choir is performing that masterpiece tonight at midnight, preceded at 11:15 p.m. by a selection of religious carols. Here’s a blurb for you, St. Agnes: “This is the Cadillac of midnight Masses in the Twin Cities.” I still won’t Like you on Facebook, though.

On the radar: As families gather across the Twin Cities, Minneapolis’s most rocking unofficial family of friends and music lovers (or, perhaps in some cases, music haters) gather at the Triple Rock for Arzu Gokcen’s annual Christmas Day Staraoke special.

Under the radar: The Mainroom crowd at this month’s First Avenue 40th Anniversary Party was a little restless for Grant Hart’s acoustic set, and there was a lot of talking and laughing as Hart played a quiet ballad. “I’ve seen him play shows like this before,” photographer Kathy Easthagen said to me. “As they get louder, he’ll get quieter.” The atmosphere is likely to be much more reverent tonight as the Hüsker Dü cofounder plays a solo set at the Entry.

On the radar: The Minnesota History Center hosts a Kwanzaa celebration with stories, dance, a fashion show, and more.

Under the radar: The Nomad hosts its fifth annual Crunkmas Parrrrrrrty (yes, I counted the Rs), with music by City on the Make, Meta, Brown Moses, and Doomstruck! (their exclamation point).

On the radar: The Bad Plus, a local jazz ensemble who have earned a national fan base over their long and eccentric career, play a free and up-close set at the Electric Fetus.

Under the radar: “Can we please stop living in the 80s?” asks Gawker. Personally, I would be fine with the 80s nostagia craze lasting indefinitely, but tonight at the Record Room, DJ Verb X turns the clock forward to the early 90s. He’ll sex you up, jump around, and make you sweat. Whether or not any celestial orbs go down on you…well, that’s your business.

On the radar: When Alex Chilton died in March of this year, many were surely surprised to learn that the Big Star leader was still alive—the Replacements’ shimmering 1987 song “Alex Chilton” isn’t the kind of tribute musicians usually get when they’re alive, they’re well, and they’re only 36 years old. Today, on what would have been Chilton’s 60th birthday, First Ave’s Depot Tavern is throwing a party in his honor.

Under the radar: Another birthday boy is DJ Mike 2600, who’s the toast of a Triple Double Tuesday dance night at the Triple Rock with a fantastic lineup of record-spinners including Gigamesh—a local hero who’s home for the holidays from his new base in Miami—and Willy Joy, Kid Sister’s DJ. Also promised: helicopter rides. Better start studying up if you want to join in!

On the radar: The Hold Steady play First Avenue. Do you think Craig Finn will be in high spirits for the holidays? Yeah, just maybe.

Under the radar: I reserve the right to occasionally recommend shows based purely on the name of the band playing. Tonight at Lee’s: Hair Club for Cowboys.

• Zenon Dance Company’s Nutcracker According to Mother Goose is good clean fun for all ages (review by Kate Gallagher)
• At Park Square Theatre, 2 Pianos, 4 Hands makes for an entertaining evening of music (review by Elizabeth Lofgren)
• A rich and delightful Nutcracker Fantasy from Minnesota Dance Theatre (review by Betsy Gabler)
• Ballet of the Dolls step out with a stylish Cinderfella (review by Betsy Gabler)
• From dancing chitlins to rapping reindeer, Sounds of Blackness celebrate the holidays their way (review by Jean Gabler)
• Billy Elliot flies high at the Orpheum Theatre (review by Jay Gabler)

• “The organization is safe”: Northside Arts Collective, in sudden turnaround, replaces majority of board and cancels plans to dissolve (feature by Sheila Regan)