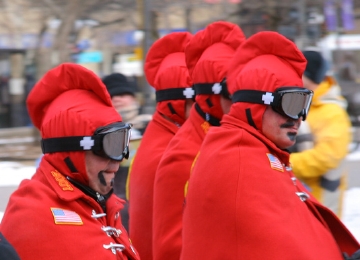 Vulcans at the ready in St. Paul. Photo by Michael Hicks (Creative Commons).

On the radar: Whether or not they actually work (one of last year’s recipients had already made plans to move by the time the award ceremony was held), METRO’s Keeper Awards are a great idea: acknowledging artists from various disciplines for (a) being awesome and (b) being awesome specifically in Minnesota. The second annual Keeper Awards party will be held tonight at Spill the Wine.

Under the radar: Marc Yaffee, Vaughn Eaglebear (“the Frybread Assassin”), Jim Ruel, and J.R. Redwater (“the Reservation Sensation”) are the stars of Going Native, Showtime’s first all-Native comedy special. The four will be at Burnsville’s Minnehaha Comedy Club tonight for a “Pow Wow Comedy Jam.”

On the radar: Dessa—of the Doomtree Collective—steps out to begin the solo career that we all guessed was happily inevitable tonight at the Fine Line, with support from Jeremy Messersmith (who may or may not play his now-infamous Snoop Dogg cover), Cecil Otter, and Aby Wolf.

Under the radar: Baltimore performance artist Rebecca Nagle is at Bedlam for a late-night performance of her new piece A Dozen Things I Want To Do On Stage. “Expect the unexpected” is a cliché, but in this case that’s what even the artist herself is doing.

On the radar: The Soo Visual Arts Center holds its annual Get Lucky fundraiser, at which you can put yourself in the running to own work by SooVAC staples including Jennifer Davis, Bethany Kalk, and Rob McBroom while noshing on food by Chowgirls and nodding your head to the sweet sounds of DJ Double Trouble.

Under the radar: Spoken word upstarts the Poetic Assassins are at Bedlam—with guests including Ashley Gold and IBé—for the release of their debut album, Red D.O.T.T. (Death of the Truth). They’re calling the album “the metaphorical assassination of what many consider to be ‘truth.'” Can you dig it?

On the radar: The St. Paul Winter Carnival is in full swing, with ice carving, a snow plow competition, and—because why the hell not—a cat show.

Under the radar: It’s the last day of the Guthrie’s Singled Out festival; show up at 1 p.m. for the strong performances (despite a frustrating script) in American Sexy, and stay for the taut June of Arc at 2:30.

On the radar: What if you were suddenly struck victim to a plague of amnesia, ultimately forgetting your own name and bleeding from your eyes and mouth? Yeah. You didn’t think about that, now, did you? “Literary horror” writer Brian Evenson did, and he’s at the BLB tonight with collaborator Zak Sally, a graphic (in both senses of the word) artist and musician who illustrated Evenson’s new book Fugue State and will play some tunes to soothe the savage zombies.

Under the radar: Thirst Theater brings the area’s top actors together with brand new “playlets” by-you’ve got it, the area’s top playwrights. Among the work being presented tonight at Joe’s Garage is a new piece by our blogger Matthew A. Everett: Lonesome Wild and Blue (Or How to Date a Werewolf).

On the radar: Among the crop of folk-country songstresses who rose to prominence in the original Lillith Fair era, few have Shawn Colvin’s combination of soul, taste (her 1994 cover of the Police’s “Every Little Thing [He] Does is Magic” notwithstanding), and pop smarts. Colvin is at—ha! You thought I was going to say the Cedar, but no! She’s at the Dakota for a three-night stand that begins tonight.

Under the radar: The Twin Cities’ independent publishers have been circling their wagons in recent months, working together to promote the Cities as a hotbed of literary upstarts. Tonight the executive directors of Graywolf Press, Coffee House Press, Milkweed Editions, and The Loft Literary Center will be at Minneapolis Central Library to “share their vision of what readers and writers can expect in the days ahead.”

On the radar: You’ve swooned over Impressionist art—did you know that there’s music to go with that? The Impressionist movement in music peaked with the swirling textures of Claude Debussy, and tonight the Minnesota Orchestra is playing what may be Debussy’s two greatest masterpieces: La Mer and Prélude à l’après-midi d’un faune. But be forewarned: host Sam Bergman and conductor Sarah Hicks will also be sharing “musical insights and humorous stories.”

Under the radar: Sometimes it’s worth going to see a group for their name alone. Tonight at the Whiskey Junction: Reverend Raven and the Chain Smokin’ Altar Boys.

Phyllis Louise Harris recommends The Asian Grandmothers Cookbook, your complete resource for learning to cook like an Asian grandmother.

Jim Brunzell talks with Scott Cooper, who directed Jeff Bridges straight to a Golden Globe in Crazy Heart; and I review a very odd double feature I saw last Wednesday morning as a preview for the Science Museum’s 2010 Omnifest.

Students at St. Paul’s Hip-Hop High recorded a special track to benefit Haitian earthquake relief efforts; Mary Turck has the story. Also this week, I was at the Triple Rock for Lissie and at First Ave for Radio K’s annual showcase of the year’s best new bands—check out Meredith Westin’s sweet pics—while Jon Behm hit the Entry for an Astronautalis show featuring a very special appearance by POS. Finally, Keith Pederson applauds the Minnesota Orchestra’s Sounds of Cinema series, which he writes “is sure to please the gay orchestra-goer.”

It was a marathon week of theater for me—often thrilling, sometimes frustrating, always fun. On Thursday I caught Radiohole’s new piece Whatever, Heaven Allows, which had its world premiere at the Walker; then on Saturday I saw all four plays in the Guthrie’s Singled Out festival and headed over to Seven Corners to see The Thing. Finally, on Sunday I saw the Acting Company’s Romeo and Juliet at the Guthrie and then went down to the BLB to enjoy Wednesday Feels Like Tuesday, a collaboration between Maggie Bergeron and the Orange Mighty Trio. Meanwhile, Sheila Regan was at the Red Eye for Everything Must Go and my mom was in the BLB’s “rec room” with Lorna Landvik. Also this week, Tom Laventure reported on the Chinese Drum Theater performance at the O’Shaughnessy.

Lydia Howell reports on the aesthetics and politics of documenting the construction of a greener America in photos now on display at Common Roots.