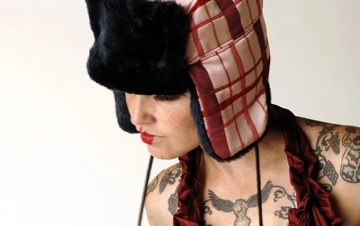 On the radar: The holidays are about traditions, but also about looking to the future; seasonal productions opening tonight fit, respectively, both those bills. For tradition, there’s In the Heart of the Beast’s longtime favorite La Natividad. For the future, there’s Jon Ferguson’s new show S. Gunter Klaus and the Story Before. (Show up at the Southern Theater early tonight for free snacks and drinks courtesy of the Red Stag.)

Under the radar: “If there’s a more entertaining new band in town right now,” the Star Tribune’s Chris Riemenschneider wrote about Metallagher in 2005, “I haven’t seen it.” Their schtick? They cover Metallica songs while their Gallagher-impersonating frontman smashes fruit with a sledgehammer. Tonight at Station 4 they’re opening for the man himself—no, not James Hetfield (he might have some pointed questions about royalties), Gallagher.

On the radar: Chicago songster Andrew Bird is at St. Mark’s Episcopal Cathedral for the second of three sold-out shows that he’s warned everyone will be experimental and instrumental. There doubtless will be a few people who clamor for the hits, but hopefully they’ll at least refrain from shouting, “Freebird!”

Under the radar: KFAI standby Dakota Dave Hull headlines a concert at the Wellstone Center to raise money for the preservation of St. Paul’s historic Victoria Theatre.

On the radar: The Weisman Art Museum kicks off its new live music series (“WAMplified,” groan) with a bang as top indie-rockers Mates of State play the riverside landmark. Then there’s a curator-led tour of the art at midnight…how cool is that?

Under the radar: With her cuddly, emblematic Cursters, artist Erin Currie has become to the Soo Visual Arts Center what Claes Oldenburg is to the Walker. Tonight, what the SooVAC is calling “Curster’s aesthetic” comes to life on Lyndale in a show of fashion designs by Currie. (An aerialist will also be performing, because why the hell not.)

On the radar: Premier Gear Daddy Martin Zellar is at the Varsity for a homecoming gig. It will be a solo acoustic show, but he hasn’t issued any notice that he won’t be singing.

On the radar: Everybody remembers when “The Park at MOA” was Camp Snoopy, but do you remember when you could go to the Mall and buy a Hulk-a-Roo at Hulk Hogan’s Pastamania restaurant? No, neither do I—but the proprietors of the West Bank Social Center do, and they’re hosting a dinner party tonight in tribute to that late great (?) establishment. And yes, of course the soundtrack to the evening will be the 1995 album Hulk Rules by Hulk Hogan and the Wrestling Boot Band.

On the radar: Though it’s now a private space run by the University Club, opportunities to hang out at the Commodore Hotel’s historic art deco bar—famously the former watering hole of F. Scott Fitzgerald and Sinclair Lewis—have happily been multiplying. Tonight at the Commodore, writers including Jim Lenfestey and Joe Selvaggio will be among several reading from their work.

Under the radar: If the words “solo acoustic performance of Megadeth’s Countdown to Extinction“ don’t pique your interest, how about “two dollar beers”? Still no? Huh. To each his own, I guess.

On the radar: The MN Film & TV Board’s highly unauthorized annual screening of the Star Wars Holiday Special at the BLB gets to be a bigger deal every year: tonight, costumed members of the Rebel Legion will be on hand (sorry, can’t promise Leia’s metal bikini) for the event, which is a benefit for Toys for Tots. Doors are at 9; get there early if you want a seat! (Your best bet is to find MNFTVB’s Chris Grap hanging out at the BLB any time after 7 p.m.; slip him a donated toy and he’ll slip you a ticket for a guaranteed seat.) If you get there too late and find yourself shut out, don’t despair: the Star Wars special is also making an appearance at JägerCon on the 22nd.

Under the radar: Our holiday theater guide has a section for “sketchy Santas,” but that ain’t nothing compared to tonight’s Santa Pub Crawl in St. Paul. Suit up and hop on the shuttle bus if you dare, but prepare to have the last of your childhood illusions shattered.

Melissa Slachetka reviews Beloved on the Earth, a new anthology of poetry for those who have suffered a loss.

Prospect Park is historic, but is it nationally historic? Not quite…and therin lies a tale. Lolla Mohammed Nur has it.

Barb Teed reports on Oscar Night America, a charitable event that started in Minnesota and has spread across the country.

Crystal Erickson writes about Healing MN, a concert to benefit a charity fighting domestic abuse; and Justin Schell covers the ambitious new release by Guante and Big Cats! (The exclamation point is part of the name.) Also, Dwight Hobbes remembers a memorable performance by Blue Felix, tapped at the last minute to open for Marilyn Manson.

Tea is not the beverage you might associate with Brit’s, but Amy Rea explains why you ought to.