Just last week I wrote about a local example of social media supporting the arts. This week Pew Internet and American Life released a survey indicating that use of social media in the arts is the norm these days, not an anomaly.

Pew surveyed arts organizations that had received grants from the National Endowment for the Arts (NEA). Of the 3,644 asked to participate, 1,244 completed at least part of the survey. The group represented a wide range of arts and sizes, but 70 percent hail from an urban center and Pew recognized that the group may be better poised to take advantage of technology than the average arts group…

Nearly three quarters (73%) of organizations that completed the survey have existed for more than 20 years, and another 19% have been around for 11 to 20 years. Only 21 organizations have less than five years of history. This means that the sample is composed of arts organizations with a relatively successful track record and perhaps more able to take advantage of technological advances than all the arts organizations in the country.

I think that reflects the fact that they surveyed NEA recipients. You have to have your act together (no pun intended) to get an NEA award. So in some ways, the report is a wakeup call to the rest of the arts community – successful arts groups are using technology! I think of some of the Blandin Broadband Communities I visited in December. Several mentioned that their local artists and crafts people were not online. Again this report makes the case that they should be – and the results may be instructive for smaller or struggling organizations. They can get a glimpse of best practices and potential pitfalls.

Again, the results indicate that folks are using technology…

The jury is out on how much arts organization love technology…

Survey respondents are divided over whether technology has negatively impacted audiences’ attention spans for live performance, but they uniformly disagree that it has “diluted the arts” by opening new pathways to arts participation and arts criticism. …

The arts organization say a big challenge is finding the time and training to use technology. Another complaint is digital distractions such as ringing cell phones and audience member texting during live performances. Yet, 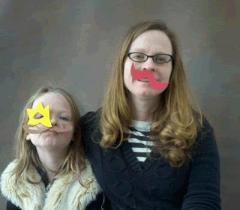 The Pew report seems to reflect my own experience as arts consumer. Last weekend I went to two local concerts (rock, not classical, but I think it still counts) and spent Saturday at an art museum. I’m sure I heard about all of the events online. and that I posted something about each event on Facebook. I probably watched the bands on YouTube or listened on Spotify before the shows.

The bands and venues do a good job using social media to promote events, yet it was The Walker that really pushed the use of technology as part of the event. Maybe that’s because they have bigger budgets; maybe it’s because we went for a kids’ day event; maybe the visual arts format more easily lends itself to social media interaction. Part of the fun was creating masks and posting for pictures, which The Walker then posts on their site. (Posting pictures of kids is always a tried and true way to get family to go to your site.) They had iPads in the gallery and taught kids how to use a photo booth app to distort their own images (fit in with the exhibit theme). Had it been warmer, we could have scanned QR Codes for a personal tour of the Sculpture Gardens.

There are things I don’t love (for example cell phones ringing during a performance – or new low last week – during a funeral!) but it seems as if most artists and art fans are embracing technology use in the arts.