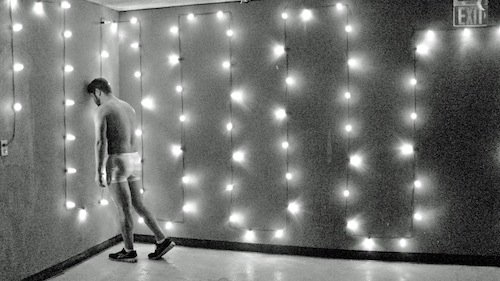 As anyone who lives up in the God forsaken North will tell you—it’s not the cold that gets in the end. It’s not the snow, or the ice. It’s the darkness. That permeating darkness when you don’t know if it’s day or night, this time of Vitamin D deficiency and Seasonal Affective Disorder. To ease our suffering, Artists in Storefronts, the public arts project led by Joan Vorderbruggen, may offer some relief by providing a little bit of light, color and movement to brighten your night.

The upcoming installment of the Artists in Storefronts project will only feature movies—a radical change in format from the visual displays of fine art that previously defined the project. “This is a really big leap,” Vorderbruggen said. She had planned on not doing another Artists in Storefronts, after taking on a leadership role in the Made Here project with Hennepin Theatre Trust in Downtown Minneapolis. After prodding from the Whittier Alliance, Vorderbruggen decided to give it another go, but wanted to do something that switched things up.

For Artists in Storefronts 5: Cineteca, Vorderbruggen says she wanted to do something that would animate and illuminate the streets during the cold, dark winter. It’s a concept she saw a lot of when she visited Finland last year, but it’s not something that’s really done a lot in the United States. “It doesn’t have to be a dramatic concept,” she says, “it just needs to provide a lot of light and color.”

The project features 26 participating filmmakers showing their films on 5 40″ television screens at 2515 Nicollet, 19 E. 26th St. and 2615 Stevens Avenue, plus a digital projection screen set up at 2710 Nicollet Avenue. There will also be films projected onto the east facing exterior wall of Joe’s Chicken Shack, from a projector set up at Armor Security. “That’s going to be bombastic,” Vorderbruggen said. “It’s going to be huge.” Finally, there will be a projector set up at Sunrise Cyclery, projecting onto the Greenway underneath the Blaisdell bridge.

The films, which have been curated by Jaime Carrera, a frequent collaborator of Vorderbruggen’s who also curated last year’s Outlet Festival, range from 30 seconds to 20 minutes long, and include both live action and animated films—all of which will be shown without sound. “There’s a lot of avant garde stuff,” said Vorderbruggen.

Each location will have the projections managed by the sponsoring business, and will run from 4 p.m. to 7 a.m., though Vorderbruggen says she’s hoping to find a way to show them during the day too.

A companion project is called Film 4M, where Vorderbruggen’s husband, Tom Siler, will be hosting a free weekly film society in the Black Forest Inn’s banquet room on Thursday evenings through March. Siler is inviting the community to give suggestions, and will also be showing eclectic and obscure films. “We’ve got a really nice projector and a gigantic screen and P.A.,” she said.

The opening reception for the project is this Saturday, December 21 from 7-10 p.m. at the Fallout Arts Initiative, in Studio 3, 2601 2nd Ave S, Minneapolis. The reception includes DJ Venus DeMars spinning while multiple short films are projected. Beer and wine will be provided by Lake Street Wine and Spirits.