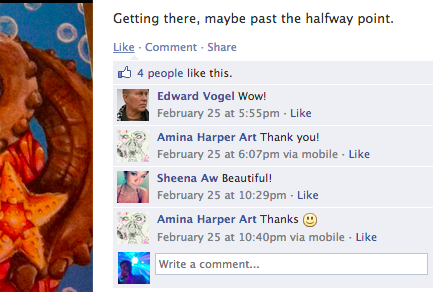 When I was growing up my mother would always remind me to say “thank you” whenever someone complimented me. Actually, it wasn’t so much reminding as it was public nagging—as though it would never occur to me to show gratitude on my own. If I told her of praise I had gotten during the day she would respond with, “Did you remember to say thank you?” and I would always make sure to tell her that I did or else she would insist that I write the unnamed giver of flattery a Thank You note for their kindness.

It was a strange form of social punishment, as there is nothing more embarrassing to an awkward preteen than writing a letter to someone just because they liked your shirt that day. While this resulted in many people receiving bizarre letters in the mail, it fostered an ability to give thanks almost compulsively because my mother could very well be watching. The fear of maternal humiliation wasn’t the only reason these lessons came in handy, though.

I once heard another artist say that “being in the arts is consistently thankless,” and while I understand that this is mostly in regards to money, I still have to respectfully disagree. I can’t tell you how many times I’ve posted an image to Facebook or hung a show and been completely taken aback by the positive reception I get from people that have been following my work from the beginning and people who have just now discovered it. It’s a whirlwind of appreciation that feels like a big warm hug made out of cotton candy and kind words. I can’t explain it better than that.

It’s true that working in the arts is difficult and there are plenty of pitfalls that can hinder career development (just like in any profession), but regardless we—as artists—are incredibly fortunate to be able to do what we do. I have, thus far, never met an artist who was forced to become an artist under overbearing circumstances; we all chose our paths and we could just as easily be working at Walmart. While we should be paid for the work we make, we should also acknowledge the other forms of appreciation we receive because no one is obligated to care about the projects we take part in.

There is a natural desire to gauge our work’s importance to others solely by how much money we are able to rake in, but financial compensation in any creative endeavor can be rare, so it is imperative to seek value in other forms of gratitude so as to not become bitter. We are consistently surrounded by support, but it’s much easier to be thankful for the value others impart onto you if you first impart value onto yourself. It’s easy to tell when someone doesn’t love, respect and honor himself or herself; if you don’t, how can you expect anyone else to?

So, be extremely thankful for every compliment you receive on every image you post, every viewer who attends an opening, every exhibition you get to be a part of, every costumer who buys a piece, every friend, fan and follower and every human being on this planet who gives you encouragement, wisdom, critique, support, advocacy and shows a positive interest in what you’re doing because they don’t have to, they chose to. They chose you.

That is your appreciation and that is what makes all this hard work all the more worthwhile. That is your thanks.