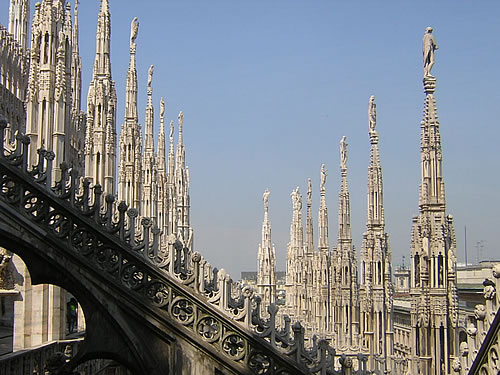 The Duomo in Milan, Italy, is a masterpiece of stonecarving. Photo by Davide Papotti

The elegant statue of a woman, holding a lily – symbol of rebirth – in one hand and gesturing with delicate flower petals in the other, stands in St. Paul’s Calvary Cemetery.

The monument, just south of the corner of Front Avenue and Colne Street, marks the graves of the Drechsler family. A flowing gown, with suggestions of needlepoint at the shoulders, drapes the 12-foot-high figure. The fine details are rendered in solid granite that was quarried near Barre, Vermont, and carved by Italian immigrant stonecutter Giuseppe Omatti. Looking at the serene figure, it might surprise viewers that the carver belonged to one of the most militant American unions.

Stonecutters include artisans employing a variety of skills, from shaping building construction blocks to carving statues of people. I have been studying these workers over the last eight years in producing If Stone Could Speak, a documentary about the scalpellini (stonecutters) who migrated from northern Italy to Barre, Vermont. I was drawn to document these particular artisans, not only by their extraordinary artistic and technical skills, but because they were assertive and effective labor activists. As I learned more about stonecutters around the country and the world, I discovered an international progressive heritage that extends back for centuries.

Since Roman times, the stonecutters and quarrymen of Carrara, northwest of Florence, resisted outside government control and later industrial control. Many are still committed anarchists. Townspeople still place red flower wreaths on monuments and plaques honoring free thinkers and radicals of the past. The stonecutters of the west coast Bohus region of Sweden were fervent socialists whose lives revolved around their labor hall.

I had long wondered why stonecutters were such independent workers. François Icher provides a convincing explanation in his book, Building the Great Cathedrals. During Europe’s Middle Ages, stonecutters traveled long distances from job to job. Once their work on a cathedral or other structure was finished, stonecutters moved wherever opportunities in their specialized work were available.

These artisans were in great demand and, due to their high level of skill, received the highest wages of all medieval construction workers. They acquired their knowledge and proficiency over long apprenticeships of five years or more (10 years of schooling and apprenticeship by the time stonecutters emigrated to America in the 19th and 20th centuries). These itinerant artisans were freed from the rigid hierarchies and rules of the local guilds and patrons. If working conditions proved to be oppressive in one place, they moved on. Stone worker guilds and later unions reflected this mobile, freedom-loving ethos. Stonecutters from many parts of Europe brought this tradition of autonomy to the United States and were willing to assert their rights in American workplaces. They were at the forefront of the American labor movement’s struggle for fairer and safer working conditions.

According to Chicago sculptor Walter Arnold, the Journeymen’s Stonecutters Association of North America (now merged with the Laborers), is among the oldest continuously operating international union in the country, founded in 1853. Local unions were established considerably earlier, including the Washington, D.C., stonecutters who marched at the laying of the U.S. Capitol cornerstone in 1792. The Chicago local’s members were the first workers in the country to achieve an eight-hour work day in 1867.

The St. Paul Branch of the international, organized in 1878, wrote the eight-hour day into its constitution and provided for overtime as well. These workers defended their rights vigorously and historian George Engberg speculates that the Pinkerton National Detective Agency may have opened a branch in St. Paul in part because of the numerous strikes by stonecutters and cigarmakers (another militant union from which AFL leader Samuel Gompers emerged).

While the stonecutters adamantly asserted their own trade’s interests, they also championed the cause of all workers’ rights. The Barre, Vermont, artisans cut and shipped a granite monument to Ludlow, Colorado, to memorialize massacred miners and their families. The St. Paul branch marched with other workers under a banner that read, “We are the pioneers of the eight-hour system.” They anticipated and worked toward the day when the eight-hour day would be the norm for all workers.

In 1885, St. Paul stonecutters merged with masons and allied stone and trowel craft workers to establish Bricklayers Local 1. The international and the local had African American members at a time when most unions were segregated. One prominent member was Casiville Bullard, a black mason who was recruited from Memphis to work on the Minnesota State Capitol, as well as the St. Paul Cathedral and other major buildings.

In the 1930s, the Granite Cutters Association of Barre won one of the most significant victories for workers in the stone industries. Cutters often worked inside closed sheds, carving the stone with pneumatic tools. The dust generated caused many to contract silicosis; most Vermont stonecutters died from the disease before the age of 50.

The workers soon realized the cause of this deadly illness and went on strike in 1903 and 1915 in unsuccessful efforts to get ventilation equipment installed. But owners, fearing a competitive disadvantage if they invested in the costly measures, resisted and used union-busting tactics to weaken the union.

Passage of the 1935 National Labor Relations Act finally enabled the Granite Cutters Association to organize 100 percent of the sheds in the Barre area. In 1938, the local was able to bargain for installation of suction equipment in all of the sheds in exchange for a pay reduction of one dollar a day. The Vermont legislature passed a similar workplace safety requirement the same year, assuring ongoing enforcement. No worker who started after 1938, the year suction hoses were universally adopted, has died from silicosis (except one cutter who was careless about using the safety equipment). The union’s solidarity and sacrifice saved the lives of future generations of stone workers.

I’ve learned most of what I’ve written about the stone trades through conversations and e-mail messages from stonecutters and members of their families throughout the United States and other countries. Some of their stories and resources are linked to this article. If you have any experiences in the industry you’d like to share, please e-mail me. More information and clips from If Stone Could Speak (Se la pietra sapesse parlare) are available on my website.

Randy Croce is on the staff of the University of Minnesota Labor Education Service, where he produces videos on workplace issues, history and other topics.

Excellent article on the long fight against silicosis, including the industry’s tactics: Seager, David R. Barre, Vermont Granite Workers and the Struggle Against Silicosis, 1890-1960, Labor History, Vol. 42, No. 1, 2001
Order from the informaworld website.

Peggy B. Perazzo has put together a directory to a huge number of web sites about quarries and stone workers.

Link to the section on unions

The International Union of Bricklayers and Allied Craftworkers includes a union history in its Members Benefits and Services guide (download pdf file).

More information on the union can be found at its home page.

Walter Arnold has posted a history of stonecutters.
Information, photos on techniques, sculpture samples on other site pages.

A six volume report on the building and restoration of the Wisconsin State Capitol.
Information on stone carving and other construction work can be found throughout the volumes. Chapter 8 of the first, Comprehensive volume, features descriptions and images of stone carvings and their designers, including Attilio Piccirilli, one of a famous Italian American family of stonecutters and sculptors who created hundreds of monuments across America, including a statue n the St. Paul Cathedral and carving of the Lincoln Memorial statue in Washington, DC.

Large archive of documents and photographs about the granite industry in Barre, Vermont. Other off-line info accessible by calling the library.