Artist/musician Mankwe Ndosi strives to connect people to the community and to the Earth through her work as a cultural worker.

Ndosi’s work focuses on the creative expression and practice.

“The exercise of creativity helps people learn more about themselves and feel more a part of the world and the universe,” said Ndosi. “It helps people to be proud and clear about their own story.”

Ndosi works with many art communities throughout the United States and the world including within the Twin Cities, Chicago and Arusha, Tanzania.

“I ask myself what should my work be for,” said Ndosi, who felt the need to create something that made an impact on and benefited others. “I felt the pressure to do something to make something.”

Ndosi was inspired by her father’s self-made mission to come to America to be successful.

Her father also worked at Augsburg College as the head of the International Student Association. “He brought people from Japan and different countries of Africa to host them in the house,” said Ndosi.

According to the artist, these interactions with people from all over the world have molded her to work as a culture worker and inspired her artwork.

“I am inspired by the environment,” said Ndosi, who said she is inspired specifically by the people in her life, such as her grandmother and mother. 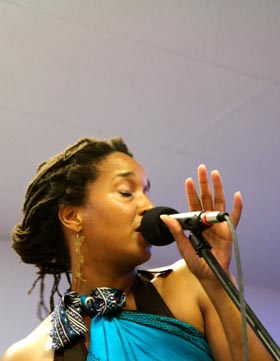 Ndosi, whose album, “Afro-Soul” was released in 2012, hopes to relieve the world from prejudice through her works and to guide them, “past a place of exclusion, materialism, and racism and into the possibility of being appreciative of the beautiful garden that we were birthed into.”

The musician said she admires other musicians such as Nina Simone and Erykah Badu for their passion for music and making a difference. “I like them because they are creative and are speaking to society, and talking about situation at the moment.

“Most people describe my music as soul or R&B,” said Ndosi. “It is very rhythmic and has lots of harmony.”

Along with being an entertainer, Ndosi also works as a community organizer with Hope Community Inc., 611 East Franklin Ave., Minneapolis. On Saturday Sept. 7, an event will be held at the center as part of a multiple installment program called “Intersections.” This particular installment is titled “The Neighborly Living Room.”

The event is free to the public and food will be provided during the discussion.

Later this month Ndosi is working with Ananya Dance Theater. The performance is Sept. 20 and Sept. 21 at the College of St. Catherine and in the O’Shaughnessy Auditorium.

For more information about Mankwe Ndosi and mentioned events, contact Ndosi at mankwendosi@gmail.com or (612) 600-0482.