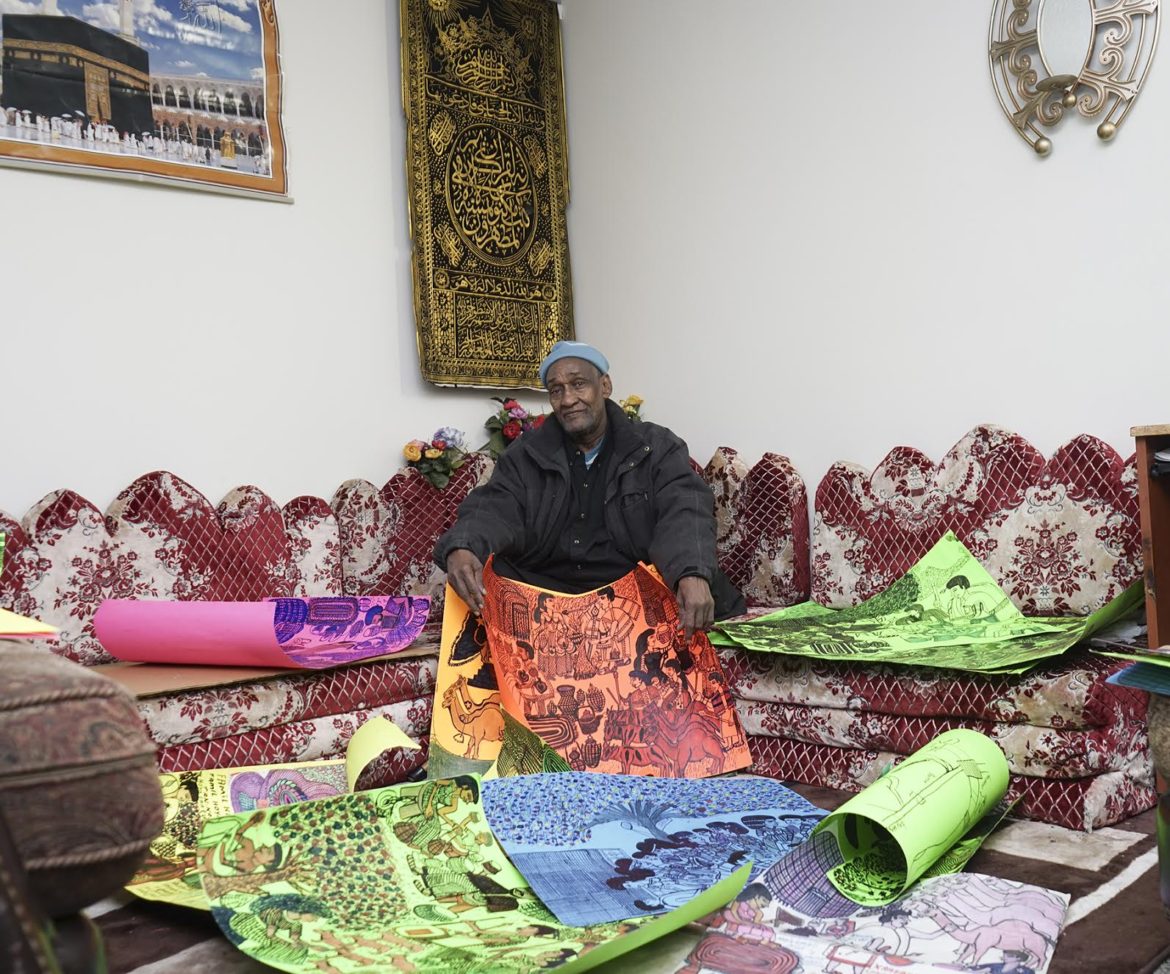 Artist Hassan Nor, surrounded by his artwork in his Minneapolis home. Photo by Wing Young Huie.

In a high-rise tower located on Portland Avenue lives Hassan Nor, a Somali immigrant. Most of the residents in the building, like Nor, are seniors. He lives in a one-bedroom apartment by himself and the living room is set traditionally with beige- and maroon-colored Arabian sofas that are closer to the ground. This is where he sat when an interesting thought struck him about picking up an old boyhood hobby.

Nor was born in a small Somali town in modern day Kenya near the Somali border. Nor, now 77 years old, came to America in 2002 seeking a more stable life. Nor is fluent in Somali, Swahili, although Arabic and English are difficult for him.

When he first arrived in the United States, he found himself spending most of his days at the mosque – the most familiar site in the bizarre new world he lived in now.

“I finished memorizing the Qur’an here in America because I spent most of my days at the mosque,” Nor said. The Qur’an, the Muslim holy book, contains 6,236 verses and memorizing it is seen as a great achievement. In the Somali culture learning the Qur’an is emphasized more when one is a child as a long held theory that a child’s brain soaks up information better. For Nor, reading the Qur’an reminded him of when he was a young boy who had nothing better to do but learn and play.

Nor developed an interest in drawing when he was just a child. He would often draw into the sandy pavement near his home. This is when he realized he enjoyed using his hands to make things. “I remember I was 9 years old. I used to draw on small pieces of paper back home,” Nor said. As he entered into adulthood, he began etching intricate designs onto wedding hall walls and mosques as well as occasionally being contracted to paint someone’s house. Over time, he learned how to sew and opened shop as a tailor. Once married, Nor went on to work full time, which caused him to put a halt to drawing.

“It wasn’t until I came here [Minneapolis] that I began drawing again,” he said.

Most of Nor’s days are now spent at the store his daughter, Farhiyo Nor, owns near his apartment. When he isn’t there he is in his apartment working on an art project. In the beginning Nor often drew on anything he found around his apartment; on the backs of flyers, pamphlets and on pieces of cardboard he found laying around his daughter’s store. One day Farhiyo brought him the posters that her children used for their school projects.

By any definition, Nor is not a traditional artist. What he might lack in opportunity, information and access is made up for in sincerity and nostalgia in Nor’s artwork. His major art pieces are found on posters of assorted colors – pink, green, yellow, orange and blue.

This adds a unique element to the idea that an artist needs a blank white canvas to start. Nor uses posters that could be found at the dollar store. He uses Crayola brand crayons and markers, nowhere near the assorted utensils of mainstream artists on expensive pristine-white canvasses. It wasn’t until last year that Nor bought his first sketchbook big enough to hold his art pieces.

Last year, Nor also had his first official exhibit with the Somali community at The Third Place Gallery, curated by Pamela Gaard, facilitated by Wing Young Huie and translation provided by Nor’s daughter Farhiyo and Awes Osman. To Ladan Yusuf, a Somali community member who saw the exhibit, his artwork means so much.

She said, “Nor’s art is retaining our beautiful culture, history and community that is built on taking care of each other and our land in Somalia. It helps our children learn, appreciate, be inspired and proud of the beautiful art and cultural identity they came from.” Her daughter, Kaaha Nasteexo, shared a poem at the reception for Nor’s art.

In his art, Nor harkens back to a time in Somalia that wasn’t so rife with war. His art usually tells a story, and often it’s a love story. “It’s a very human emotion,” he said, “and people enjoy it.”

In Nor’s depictions, there is often a beautiful Somali woman dressed in a long two piece traditional dress who has long black hair, a pointed nose and almond-shaped eyes. And there’s often a handsome man vying for her attention. Sometimes the woman is caught between two men who are fighting for her love, other times she is introducing the man to her parents, or she is a bride and is making the first meal for her new husband outside their new home. He also has drawings of famous historical events and sites such as Mecca, the site of pilgrimage for Muslims.

While Nor has been fortunate enough to sell some of his artwork, the sales are not his primary motivation. Nor passes down a culture to a new generation of Somalis who have never known a peaceful Somalia where most household items were handcrafted and not store-bought. People depicted in Nor’s art live in big round homes that usually served as a place to sleep or a roof to find comfort under on cold rainy days.

“People lived outside and slept inside,” Nor said. Somalis are traditionally pastoral nomads that moved from place to place with their herd. Nor’s art is an ode to the Somalia his own parents and grandparents grew up in and heard of through stories of a time before the colonizers came and changed Somali life.

“His art is for Somali kids born in America who aren’t aware of the rich culture they have. Somali kids in America have adopted American culture who can hardly speak Somali,” Farhiyo said.

At his last exhibit, his granddaughter Aisha performed a poem at the opening reception. Zamzam Yusuf is Aisha’s sister and a senior at the University of Minnesota. Work like Nor’s has made a big impact on her.

“For someone like me who wasn’t born in Somalia, it gives me an inside look on how Somalia used to be. I have a piece of Somalia with me with his art,” she said.

To Nor, having that effect on the next generation makes his art even more worthwhile. “If I have taught one American-born Somali about their heritage, I have done my job,” he said.

Correction: This article has been corrected from a previous version to show who helped organize Hassan Nor’s first gallery exhibition.