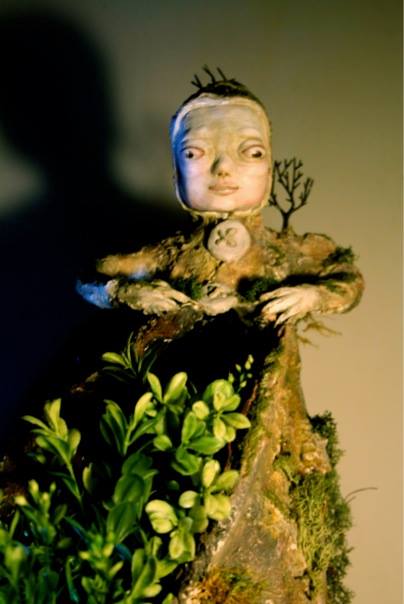 So, remember when I told you, in short, that Alex Kuno is awesome and you should totally be paying attention to him as he is embarking on an enormous project for the upcoming fall Art Crawl? Well, I’m here now with my promised interview that further proves that I was totally right and you should all buy me and Alex candy because he is awesome and I was accurate in my description of that. That’s just how we celebrate around here.

Anyway, here’s that interview. I hope you learn as much about Alex and his process as I did.

Are the kids really all right?

Well, who knows? Over the years, these “kids” stopped being kids for me. I sort of think of them as states of being in a way: they’re partly those nagging bits of my own inner monologue, where I feel irresponsible and guilty sometimes, having this compulsive need to paint for a living and all the sacrifices I’ve made to pursue it. More than that, these “kids” represent shifting moral, cultural and political ideals. I’ve just come to see all the terrible things being played out on the news these days as variations of childish, lizard-brain impulses taking the forms of gas attacks in Syria, Monsanto screwing with our plants, ol’ racists taking people’s rights to vote away, etc. So on that level, no: the kids most certainly in a lot of trouble. However, since all my narratives have no clear beginning or end, all the dire situations the kids find themselves in are pretty open-ended, so things could turn out okay for the after all. It’s all a matter of perspective.

Are these situations more like the journeys of hero’s or just hapless souls in unforgiving environments and circumstances?

I think of the series more like parodies of children’s fables. It seems like our culture takes “and they all lived happily ever after” way too seriously. Ideas like Manifest Destiny and American Exceptionalism are terrific myths, but they just aren’t compatible with how the life really works. That pot of gold at the end of the rainbow was never there to begin with, and that’s a hard lesson for children to learn as they become adults. One of my stories might seem really bleak and hopeless to some, and perfectly cute ad hopeful to others. Letting viewers imagine the stories is a richer experience than being sold a bill of goods only to find out that it was all a big fat lie in the first place.

This all sounds so bitter and angry, but I don’t feel that way at all. All the stuff that’s happening in the world these days, secrets being revealed, class systems being exposed, etc. is all so fascinating to me, and it feels like we’re hurtling toward some huge, tectonic shifts regarding how we view our place in the world and though it seems clear that things are about to get much worse than they get better, I hope I live long enough to see how some of these events shake out.

So, is your objective to subvert the idea of the fairy tale? What does it mean to work with such concepts?

Yeah, that’s certainly part of it, because we’re taught to believe that so many of the fairy tales we base our lives on are true! If we just pull ourselves up by our bootstraps we’ll be successful, we invade countries to spread Democracy, evildoers hate our Freedom, if you buy such-and-such a product you’ll be better than so-and-so a person…it all just feels more and more hollow and surreal.

I think my improvised, open style of storytelling is a reminder to myself not to get bogged down in these systems. I’ve seen so often how destructive right-wing religious zealots have been to the people they’re presumably trying to “save”, but I also know how limited and uncreative hard-nosed atheism is. It just seems to me that maybe the reason we’re alive is so we can learn what the meaning of life is and make it up as we go along; being told we’ll go to a heaven if we’re good or Hell if we’re bad is just as cognitively dissonant and impossible to perceive if we tell ourselves when we die we just stop existing. Our imaginations are so much more fun than that!

I once heard that a happy ending, or any ending, should be earned. What are some of the most important storytelling features to you?

I think I’m really interested in how stories evolve, more than where they end up. “It’s the journey not the destination” or whatever. Louis CK’s show Louie shows how powerful thematic ambiguity can be, same goes with Coen Brothers movies. Since I work in still images, eye contact is the main narrative vehicle. I focus on who’s looking at who and how, and since so much of the “action” is based on what my characters are about to do, the whys wind up being left to the viewer. I deal a lot in how my characters are connected and relate to each other; gender, family, predator/prey, social hierarchies, social groups and classes…those are the major themes that crop up. Well, that and cannibalism, I guess.

Are your works character-driven or situation-driven?

I think first and foremost, my stories are mood/emotionally driven. I try to be as improvisational and as intuitive as I can be when starting a new piece or story. Since my pieces are irregularly shaped I sit and stare and mull it over in my head and kind of let the voices in my head start talking, then when one voice shouts the loudest I’ll go for that one and figure out the stories in relation to the shape of the wood or space I’m showing in. That’s what’s making this Children’s Crusade series show challenging; I’m starting with how to find the right “moods” for three separate and distinct spaces, yet have them all fit together thematically while making each sculpture and painting stand on their own.

That’s not to say that I don’t care about the characters when I’m building up a story. I admit that I see these figures as dolls that I control. I know that’s something a serial killer would say, but it’s true; they’re all the same size and have a limited range of movement so I can “drop” them into an environment. That said, I really do have a lot of sympathy for the characters I make and wish ’em all the best.

One of the stranger experiences I’ve had while making this series happened this year, when I moved into sculpture. I’ve painted hundreds of these figures over the years, and I think they’ve become real characters when I’ve been able to imagine myself reaching into the painting and “scooping” the figures out and holding them in my hands. So, when I started experimenting with polymer clay and held the 3d figure in my hands for the first time after it came out of the oven and had time to cool, it was still warm on the inside, like it was radiating literal body heat. After I finished painting it I held it up to an old painting of mine, and noticed that the sculpture was the same size and dimensions of the second figures. I made a character from my paintings that I could finally hold in my hands, and it genuinely creeped me out

The Children’s Crusade is such an impressive undertaking—and your career is already very impressive. What was the process like in deciding to craft such an event?

The Children’s Crusade started simply because I wanted to see if I could get a space to show some of these new sculptures for the Fall Art Crawl in Lowertown. I’ve been wanting my figures and landscapes to literally come out of the walls and interact with the audience in a new way. So for the better part of a year I obsessively watched model train landscaping and polymer clay sculpting tutorials on YouTube and played around with the materials in between my commissions and illustration projects. The neighborhood art initiative Rage to Order has been really supportive of my work in the past and made some calls. Within a week, what I thought was an over-reaching pipe dream turned into this whole event. The Bedlam Theater, 262 Studios, and the Tilsner Art Lofts have all been so accommodating and supportive about the project that it’s been a totally invigorating—but overwhelming—little whirlwind. Another amazing burst of support has come from everyone who’s been supporting it through the Fundrazr project I set up and a lot of other private donations from collectors and longtime fans of the series. I know I’ve been all “it’s all about the journey” on this, but I can’t wait to see how it turns out.