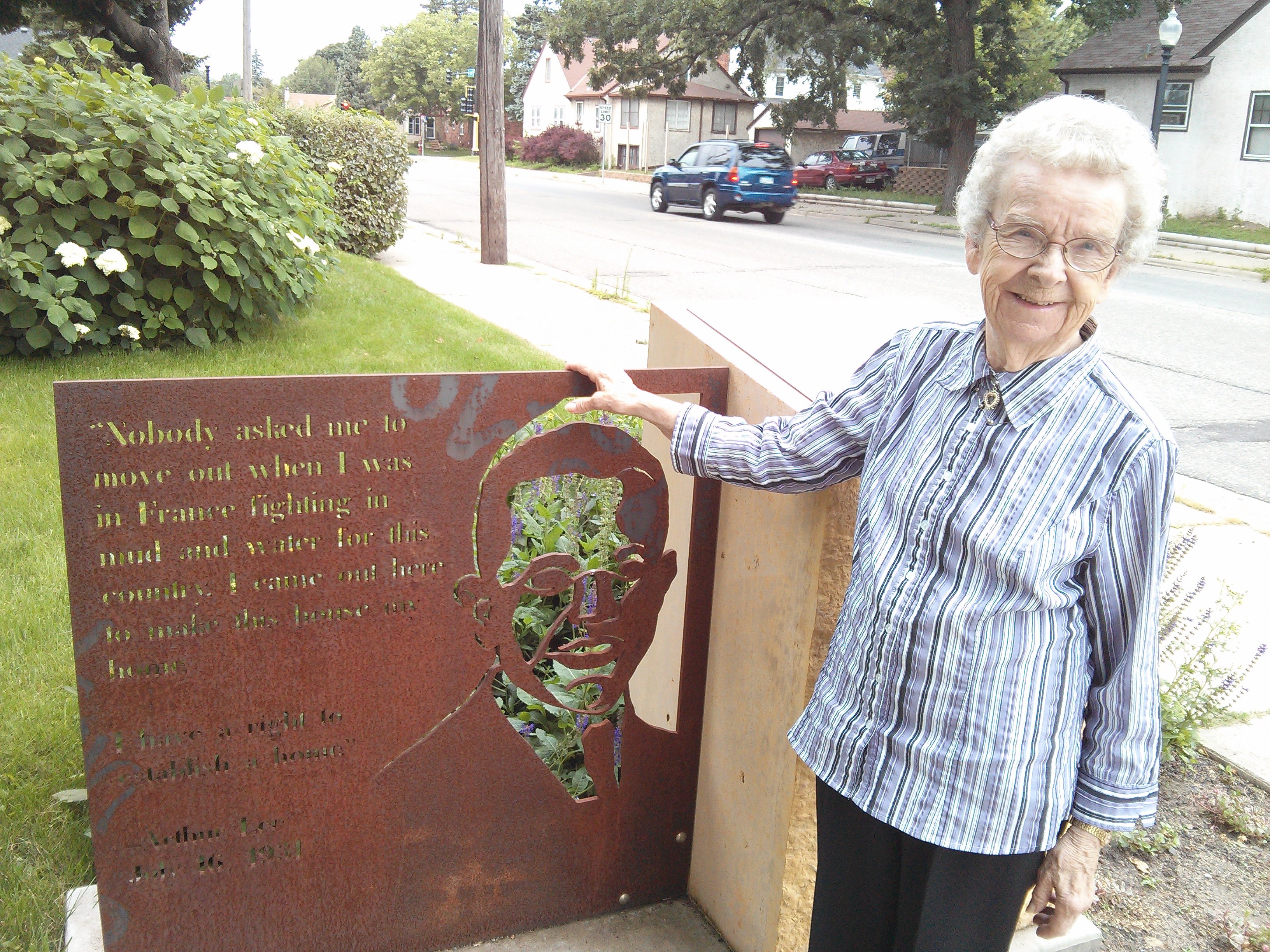 Pearl Lindstrom’s home at 4600 Columbus Ave. in south Minneapolis has gone national — the house was added to the National Register of Historic Places July 11, 2014.

Lindstrom, a friendly 92 year-old widow of a recently deceased minister, has meticulously maintained the little white house on the corner of 46th and Columbus for 56 years. But Arthur, wife Ethel, and daughter Mary Lee’s brief two years in the house was met with racial animosity and strife as an African-American family integrating an all-white neighborhood in 1931.

For more in-depth coverage of the Lee family’s story, see the links below:

The Lee family suffered picketing, threats, racial epithets and angry mobs that sometimes grew to several thousand. Arthur Lee, a World War I veteran and a postal worker, found solace and protection for his family from other veterans and co-workers, many of whom were white. The police also protected the house for a year and eventually the crowds thinned. But after two years of turmoil, the Lees moved on to a predominantly African-American neighborhood in Minneapolis.

“Nobody asked me to move out when I was in France fighting in mud and water for this country. I came out here to make this house my home. I have a right to establish a home.” – Arthur Lee July 16, 1931

(A quote from Arthur Lee is inscribed on the sculpture created by the Chicago Fine Arts Center, in collaboration with Obsidian Arts.)

Renewed interest in the Lees’ story begain to gain traction, according to the Star Tribune (http://strib.mn/WG84ZG), after a 2001 publication of research by law Professor Ann Juergens detailing the work of the local NAACP leader who represented the Lees during the neighborhood conflicts. Among the groups leading the efforts for historical recognition were the Field Regina Northrop Neighborhood Group, and students of Assistant Professor Greg Donofrio, Director of Heritage Conservation and Preservation at the University of Minnesota School of Architecture.

The Arthur Lee monument, unveiled in 2011 with a big community celebration and commemorative ceremony, honors the pain, determination, and courage of the Lee family, and also serves as an acknowledgement of a turbulent point in the history of Minnesota race relations.

In addition to the monument, the Lees’ story has inspired a number of projects, including a state-champion history project, and an upcoming exhibit entitled “A Right to Establish a Home” that will be unveiled on August 22 at the University of Minnesota.

(Below, Pearl Lindstrom reflects on what the Arthur Lee story and monument mean to her).

The Arthur Lee monument was unveiled in 2011

The former home of the Lee family was added to the National Register of Historic Places July 11, 2014