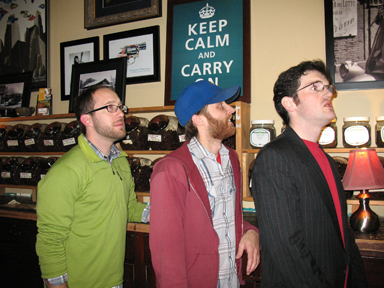 Art Vandalay’s 2009 CD debut Dancin’ With Your Demons shifted into gear what was an indistinct, but nonetheless promising, career. Singer-songwriter Brandon Henry started out in 2004 in the trio Nothing of Consequence, playing places around Minneapolis (Acadia Café, 7th Street Entry), then joined the duo Gumption Trap. Dancin’ With Your Demons, a fine solo album, saw Henry, who backs himself up on acoustic guitar, get very, very busy, doing shows all over the Twin Cities. He’s now decided Art Vandalay is a band of Brandon Henry, drummer Calvin Keasling and, from Dancin’ With Your Demons, Ben Cook-Feitz on keys. Joining them for the follow-up album Heaven’s Operahouse are Chris Horgan (accordion). Brandon Henry again wrote all the songs and still produces.

The result, this time, is quite one would hope for. It’s creditable enough, with fairly likeable vocals set to spirited music. The melodies, though, don’t come up all the way up to snuff. Not, anyway, as compared to Dancin’ With Your Demons, which engaged the listener with warm singing and imaginative writing. You can get used to the songs on Heaven’s Operahouse—that’s the point. Dancin’ hooked you right off the bat. Here, “Pitch and Sway” with its stiff percussion and Henry’s sounding like for all the world like he’s forcing to match the beat, is listenable–it just isn’t terribly remarkable. “Fool’s Gold” comes off as surprisingly pretentious for a guy who sparked his first album with spontaneity. It sounds like someone trying to sound folk-country. “Heaven’s Operahouse” is a thankful exception proving the rule for this collection of tunes. It’s done with a fresh feeling to it, natural-sounding vocals and an easy-going flow that makes it easily a standout on the album.

Art Vandalay is an established entity and, on the strength of Dancin’ With Your Demons gives this outfit solid credibility—enough to withstand the disappointment of Heaven’s Operahouse. Brandon Henry and company are hardly the first group to come behind a winning debut with a lackluster follow-up. Happens all the time. And one would do well to, instead of chalking Dancin’ With Your Demons up as fluke, figuring water has found its level with Heaven’s Operahouse, reserve final judgment and see what Art Vandalay comes up with next. It just may be a very welcome return to form.