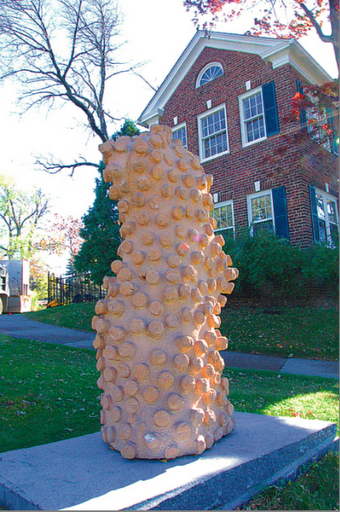 Babies reach out for it, children like to climb on it and adults are curious.

“Bumpy” as it is titled by its artist Zoran Mojsilov, the Yugoslavian sculptor from Minneapolis, was installed for a price of $350. But the large stone sculpture may not be at the corner of James Avenue and Lake of The Isles Parkway East for long. The controversy over the piece is becoming just as much a debate about art and public space as it is an underlying discussion about community.

Situated atop a granite pedestal at the southeastern section of Lakes of the Isles, Bumpy has generated a lot of talk since the day it was installed by Todd Bockley, owner of the condo next to where the piece is located.

Across the street from Bockley’s condo live Richard Frase and his wife, 26-year residents of the East Isles Neighborhood. “It is the ugliest piece of art we’ve ever seen and we’re in our 60s and have seen lots of art. In a gallery people can choose to see it. My wife and I see this thing every time we look out our front windows toward the Lake. If art is supposed to generate questions then maybe it’s trying to say ‘why is this ugly and why do we care?'”

Bockley, an 18-year resident of East Isles installed the piece on what he thought was his property in late June of this year. And that’s where the debate started. It turns out that the triangle of boulevard grass that appears as an extension of his property is actually city property. In October Frase sent an email via the city’s website to inquire about the legality of public art on city property and whether Bumpy had an official permit. Mary Altman, Public Arts Administrator for the City of Minneapolis, in return stated that the piece did not have a permit.

Bockley states that he was unaware that he needed a permit at the time of installation but quickly applied as soon as he knew he needed one. That permit was quickly denied. Altman explains, “We get many applications, Mr. Bockley is a gallery owner and artist representative at Bockley Gallery not far from his home in Kenwood.” That was an immediate red flag. Public art is not allowed to be a vehicle for commercial sales. Bumpy’s artist Mojsilov is represented by Bockley and has loaned the piece to Bockley.

In his defense, Bockley clarifies that there has never been a sign or any other information on the piece declaring it is for sale. In fact, not only is there not a sign, the title, artist, creation date and media used, usually seen on professional art, public or gallery is not there either. “It has never been my intention to sell the piece. I think it’s a beautiful piece of art and I thought it would look great there.” Bockley says that since the piece was installed he’s had all sorts of people of every age stop and ask about the piece and compliment him on it as he’s been working in his yard. “When my mother lived here,” he continues, “she always thought it would be great to put a piece of art there. I’m just following through with that idea.”

Bockley may have a long way to go. He has since filed for an appeal with the city. It will soon be heard by the Transportation and Public Works Department. In it, he refers to lack of an identifying sign and that “…this sculpture is not located near the gallery, but rather outside of my private (and unmarked) house. This sculpture was meant for the cultural edification and enrichment of the neighborhood – and with the belief that it would make the neighborhood a more culturally rich and diverse place.”

Would Bockley consider moving the piece a short distance onto his legal property? When asked he said he’s never thought about it.

If his piece makes it past the “commercial” test he still has to make it past the city’s public art criteria. Some of those requirements involve maintenance costs, context, appropriateness to the space as well as positive community enhancement – really only the tip of the iceberg. At least as far back as Plato and Socrates, humans have struggled to define what art is. That discussion may never happen.

And what of Bumpy? The main stone was found in the excavation of the new Twins Stadium. Mojsilov picked up the piece of scrap rock and brought it back to his studio for a sculpture. He then envisioned a new work that exploited the stone sculpture process. The bumps on the piece are actually the negative form of drill holes traditionally used to carve large stone sculptures. Straight from the artist, that’s what the piece is about.

What may be most surprising about this debate is the community communication process. Bockley has stated from the beginning that whenever he spoke with anyone he said the piece was meant to be temporary. He only wants to see it through the winter. But that information may have not been received by everyone. When asked if, in this whole process, anyone has ever spoken with him directly about their distaste for the piece he said, “No.” So although there have been e-mails flying back and forth and neighbors talking pros and cons about the piece, none of the local parties directly involved in the debate have ever had a face-to-face conversation.

The condo building that Bockley lives in is part of a duplex condo. His neighbor, Rhonda Kuehl, a five-year resident of East Isles, gave Bockely her approval before he had the piece installed. She summed it all up with, “If the purpose of public art is to get people talking, then this is a roaring success!”