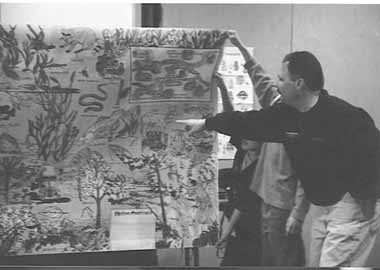 Visitors explore an exhibit at the Carl Kroening Interpretive Center.

lready tired of being indoors? Looking for something to do with the family? How about going on a time-traveling adventure right in your own neighborhood backyard? Walk through the glass foyer. Unzip the kid’s parkas. Get ready to step back through time at the Carl Kroening Interpretive Center at 4900 Mississippi Court.

Even in the dead of winter, nature is still on display throughout the building for inquisitive minds. Look around on the walls in the main corridor and you will see a beautiful 10-foot mural and a variety of art of fish, birds, and land-uses that affect our water – created by Jenny Lind fifth graders.
The artwork is the result of the Lind-Bohanon Neighborhood Association, Mississippi Watershed Management Organization “Water Connects Us” grant and will only be on display through January 2006. The halls of the Interpretive Center come alive with their beautiful artwork to tell the story of nature and history lessons learned.

Long before the Carl Kroening Interpretive Center and the North Mississippi Regional Park claimed this stretch along the river as their home and before I-94 went through, there were farms, brickyards, lumber mills, a workhouse and a sanitarium, and a neighborhood of 100 homes known as the Mississippi Courts from 1948-1985. In 1948, then Minneapolis Mayor Hubert Humphrey found a lack of housing for returning World War II veterans appalling. He put out a public call to anyone with spare room to open their homes to the veterans. A public campaign called “Shelter-A-Vet” began to try alleviating the housing shortage. Amid this effort Mayor Humphrey applied for federal funding and was the first in the country to receive it. As a result, 25 single story 4-unit homes called the “Mississippi Courts” were built along the riverbank from 49th Avenue to 52nd Avenue North to help ease the housing shortage. They were some of the first public housing in the country. Many families eagerly moved from basements and attics in North and Northeast, spare rooms from the Women’s detention center, and Quonset huts from Sumner, into these “brand new” two-three bedroom dwellings, with a total of 600 sq. ft., to raise their families calling them a “spacious home with a great view!”

In the spring of 2005, 20 years after the Mississippi Courts were razed and the highway was put in, over 75 fifth grade students and 25 fourth grade students from Jenny Lind Elementary School heard first-hand from two of the first residents from the Mississippi Courts. Mike Fahey and Kenny Fosberg told what it was like being in fifth grade at Jenny Lind School and how the neighborhood and river have changed. The Mississippi Watershed Management Organization and Three Rivers Parks District also contributed their expertise.

Visit the park and Kroening Interpretive Center. And before bundling up and heading out the Interpretive Center door, ask to see the “Water Connects Us” PowerPoint presentation created by area seniors. Student’s artwork has been creatively put to music to tell the story of the students’ time-traveling adventure to the Mississippi Courts. Fish, fauna, habitat and flyways, all help tell the story. Where better to time-travel and find out about our neighborhood, the changes that have occurred over the past century, and what they mean for our water quality than at the Carl Kroening Interpretive Center?