All across the state schools are experiencing serious budget crunches, and typically some of the first programs to be axed are those of music, theater, dance and visual arts. 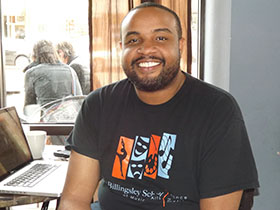 For schools serving economically depressed communities, courses and programs in the arts are all but nonexistent. That does not sit well with David Billingsley. In fact, it bothered Billingsley so much that the 28-year-old took a leap of faith and left his job teaching music to found the Billingsley School of Music & Arts (BSOMA).

BSOMA’s mission is to provide tuition-free arts instruction to youths of underserved communities in the Twin Cities metro area. For Billingsley, who studied music all of his life and is classically trained as a pianist, BSOMA is something of a life’s calling.

“I’ve wanted to start this school since I was 14-years-old,” said Billingsley, a graduate of the University of Wisconsin – Eau Claire and a master’s graduate of St. Thomas University. “I was always the only Black kid (in music class) and you couldn’t help but notice that. I felt alone, but at the same time I felt like I was supposed to be there.”

“I just didn’t think it was fair that I had friends with more talent than I had and I passed them because they didn’t have the resources to continue,” said Billingsley. “As I started teaching I would have students take lessons for a month and then have to quit because they couldn’t afford $80 a month – that’s a (family’s) phone bill. The bottom line is you have to give (lessons in the arts) to (financially disadvantaged students) for free because of economics.”

When Billingsley claims his friends were better than him as a musician, it causes one to pause and think what those children could have become in the world of music – especially considering what Billingsley has been able to accomplish. At just 28 years of age, Billingsley has toured the globe with the Sounds of Blackness and has played with artists such as Eric Roberson, Noel Gourdin, N’Dambi and his own group, BoomBox. He taught music at several area schools and was the dean of student affairs at Love Works Academy.

Through BSOMA, Billingsley hopes to give others the opportunities he has had because of his involvement with the arts. Without schools such as BSOMA Billingsley said most of the students his not-for-profit hopes to instruct once it begins classes in the summer of 2014 would have little to no formal exposure to the arts.

“In Minnesota only 28 percent of schools offer all four arts disciplines. There are tons of kids who are not even being given a dance option. Whole programs are shutting down,” said Billingsley. “Schools with 10 arts teachers before are being cut down to four or five.”

BSOMA recently received a $10,000 Google grant and has attained funds from individual donors, but more funds are needed to fully staff the school and to eventually land a permanent location.

“Grants are cool, but individual donors –people who believe in our mission—they are the key,” said Billingsley.

One person who believes in BSOMA’s mission is Gary Hines, founding member and musical director of the Grammy Awar-winning ensemble, Sounds of Blackness. Hines has signed on as a board member for BSOMA.

“(BSOMA) is right in line with what Sounds is all about and I’m honored to be a part,” said Hines. “The sky is the limit for the students and (BSOMA) will have a profound impact on their talents and their lives. David’s heart, soul, concern and caring are helping to shape and quite literally; helping to save young lives.”

Hines has joined Billingsley in his call for individual donors.

“I think potential donors should take a hard look at what we’re doing and like Spike Lee said, ‘Do the right thing,'” said Hines.

Potential donors or prospective students seeking more information on the Billingsley School of Music & Arts can visit the school’s website at www.bsoma.org.