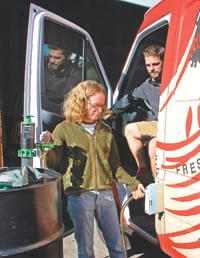 Pop quiz. Which of the following statements are true and which are futuristic fantasies?

1. Downtown St. Paul is heated and cooled by a plant that runs primarily on waste wood.

2. There’s a coffee company in the metro area that makes deliveries in a van that runs on 100 percent biodiesel.

3. Twin Cities residents can get all of their electricity from wind energy.

We’re not used to seeing good news about energy. For a while we watched in disbelief as gas prices climbed up to $3 per gallon. Now there’s an even bigger monster ahead: winter heating bills that threaten to snap already-frail household budgets. It’s hard to believe that someone would use the words “good news” in reference to energy. And yet, there is some: in little pockets throughout Minnesota, alternative energy is gaining ground. It’s not enough, it’s not coordinated, it faces immense commercial and political obstacles, but it’s there, and it’s growing.

Biomass: in your town
Anders Rydaker isn’t an architect, a contractor or a developer, but he’s arguably changed the St. Paul landscape more than any of the above. “We had a smokestack in each and every building,” he recalled. “Now when you drive into St. Paul on a cold morning, it’s very nice, you don’t have that lock of brownish air. So it has helped.”

Rydaker is president of District Energy St. Paul, a private, nonprofit company that supplies about 80 percent of downtown St. Paul with heating and cooling from a biomass plant. Since the company began operations in 1983 —using more traditional fuel sources— 300 chimneys, 150 smokestacks and 50 cooling towers in the downtown area have become obsolete, according to District Energy’s website.

Though the plant runs primarily on wood waste, about 30 percent of its fuel is natural gas and coal. Still, the reliance on a low-cost renewable resource keeps the price of energy low: customers of District Energy are paying less than half of natural gas rates this year, said Rydaker.

Underground pipes connect District Energy’s Kellogg Street plant to government buildings, commercial businesses and some townhomes; through these pipes runs hot or cold water. The distribution system is cost effective because of the high density of the downtown area—in a rural area, the cost of laying the pipe would be too high per capita. As it is, the plant won’t finish paying off construction costs until 2013, said Rydaker. Funding comes from revenue bonds.

District Energy’s biomass plant, which was built in 2003, burns untreated waste wood (so, no power poles or railroad ties) in a special combustion chamber; ashes are used for fertilizer or road construction. About 300,000 tons of wood—mainly from diseased trees, trees blown down by storms or cut down for development—are burned every year. As Rydaker sees it, that’s about 40 full-sized tractor-trailers a day diverted from the landfill.

“What we’re doing here is that we’re using local fuel that would end up in a landfill creating methane (that’s a greenhouse gas). By using it as a fuel we get the stability on our price, we’re helping reduce the amount going to the landfill and [we’re] reducing pollution,” he said.

Rydaker, who had worked on similar projects in his native Sweden before taking the helm of District Energy in 1993, believes that such systems will become more common as gas and oil prices rise. Already an almost identical plant is in the works on the Iron Range. This is more than just economically and environmentally smart; it’s a necessity, said Rydaker.

“There’s not enough natural gas to meet the demand,” he said. “We’ve reached the natural gas peak, so we have to start to import natural gas from other countries. We’re putting ourselves in the same kind of position as we are with oil, and what kind of policy is that? I have a hard time [understanding] how politicians can really think that’s the right thing to do.”

Biofuels: in your tank
When the owners of Peace Coffee, a Minneapolis-based international coffee cooperative, realized they’d grown too large to deliver all their orders by bicycle, they faced a dilemma. They didn’t want to sell out to the “petro-industrial complex”—but they had to find a way to get their beans out to the suburbs. The answer: a van that runs on biodiesel, which is a vegetable oil-based fuel.

“It’s working out very well,” said Beth Backen, a Peace Coffee production worker and the one who found a source for biodiesel. “We’re very happy with it.”

They didn’t need to convert the van: Backen explained that conversion is only necessary if you’re using straight vegetable oil as fuel. Although biodiesel is made primarily from vegetable oil—mainly soy, but sometimes rapeseed; and sometimes from waste grease from fryers and the like—it’s mixed with a bit of methane and lye and then blended to a thickness that behaves like diesel fuel. It’s got several advantages over petroleum diesel: fewer toxic emissions, safer (nonflammable), smells better (think French fries, popcorn, barbeque). And, said Backen, lately biodiesel often costs less than diesel at the pump. Biodiesel costs about $3 a gallon, and gets about the same mileage.

Kai Curry, the founder of the Twin Cities Biodiesel Cooperative, supplies Peace Coffee with their fuel. He buys biodiesel from three Minnesota plants (in Albert Lea, Redwood Falls and Brewster) and delivers 7,000-10,000 gallons each week, the bulk of it to gas stations and farmers.

Curry himself drives a 1976 Mercedes on biodiesel and vegetable-based fuel. He warns prospective converts that old cars will need new fuel lines. “Biodiesel cleans everything up really well and it also deteriorates natural rubbers,” he said.

The country’s biodiesel capacity about doubled over the last year, said Curry: in 2004, 30 million gallons of biodiesel were produced in the entire U.S., and this year Minnesota alone boosted capacity to 40-60 million gallons. It’s not nearly enough to run everything, though. “If the whole state went 100 percent biodiesel, we couldn’t make enough,” said Curry. “It would take 1 billion gallons.”

In any case, Curry doesn’t expect the state to move quickly on this. His best guess is that in 10 years, most diesel engines in Minnesota will use a 5 percent biodiesel blend.

As of September 29, Minnesota became the first state to require almost all diesel sold in the state be blended with 2 percent biodiesel (with exceptions for nuclear power plant engines, railroads and taconite mines). Legislators set the percentage low to ensure that there would be enough biodiesel to meet the demand, explained Ralph Groschen, senior marketing specialist at Minnesota’s Department of Agriculture. They also wanted to be sure that biodiesel was compatible with all vehicles. Now, says Groschen, they’ve been reassured on both fronts, which paves the way for increasing use of biodiesel.

“It’s a good place to start,” he said. “It’s happening. The main accomplishment is that it’ll be all through the petroleum distribution system.”

He compares the state’s move toward biodiesel to its initially wary use of ethanol (a fuel made from corn). In 1991 the legislature passed the first ethanol mandate, but it wasn’t implemented until 1997. In 2003, the state upped the required ethanol content of virtually all gasoline sold in Minnesota to 10 percent (with exceptions for marinas, resorts and airports).

Groschen finds several reasons to believe biodiesel use will continue to increase in Minnesota. “In the next 20 years it’ll be much more difficult for people to pretend that we’re not going to run out of or low on oil,” he said. “Predictions are that the peak will happen between now and 30 years from now. It’ll be a real wrenching experience. I think it would be irresponsible not to begin to develop markets like biodiesel and ethanol until it becomes an emergency.”

As the price of conventional fuel goes up, said Groschen, alternative fuels become more attractive. “There’s a lot of people blending more than 2 percent [biodiesel]. It’s more competitive than people thought it would be, and so there’s a lot more being used. Who knew that diesel would be $3 a gallon?”

A new law: in your state
State Sen. Ellen Anderson doesn’t want to leave the health of the fledgling renewable energy industry in the fickle hands of the market. In 2006, for the second time, she’ll push for legislation to create a renewable energy standard, requiring all utilities in the state to produce 20 percent of their electricity from renewable sources by 2020. Though many rural and municipal utilities oppose such a standard, Anderson said there’s broad grassroots support across geographical regions and party lines, and she’s hopeful that in an election year, politicians will find it especially hard to vote against such a bill.

“Everybody says they’re for renewable energy,” she said. “Everybody. Even the governor.”

Making such requirements into law would be good business for Minnesota, she added.

“It creates a standard that will drive private investment,” Anderson said. “I think it will also make us able to attract manufacturing plants and the infrastructure that goes along with it. It would bring in thousands of jobs and millions in investment dollars.”

In addition, renewable energy will become more and more competitive as traditional fuels continue to skyrocket, said Anderson. “There will be limits on carbon in next five to 10 years, no doubt about it,” she said. “Coal’s going to be a lot more pricey. We need to be pushing a little faster.”