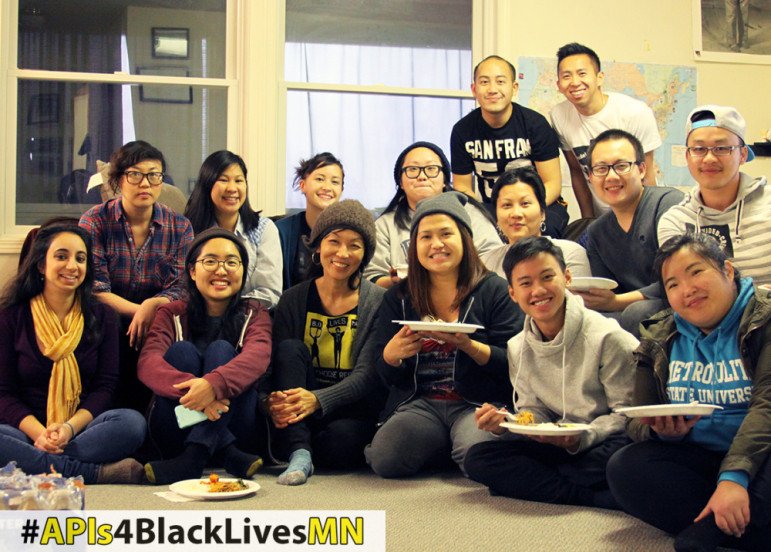 APIs4BlackLives-MN is a coalition of Minnesota Asian and Pacific Islander (API) individuals and organizations that work for social justice in solidarity with Black Lives Matter (BLM) – Minneapolis and St. Paul. Our coalition seeks to address anti-Blackness in Asian communities, advance cross-community collaboration, and increase API participation in political and racial justice issues.

Volunteers with APIs4BlackLives-MN talked with Asian residents in North Minneapolis neighborhoods on the weekends of Dec. 7 and Dec. 14, 2015 about their experiences with police and with the Black Lives Matter movement. We sought to assess the level of awareness about and engagement with the issues of police abuse, the killing of Jamar Clark and Black Lives Matter.

The Minnesota API community is predominantly comprised of South Asian, East Asian and Southeast Asian people. However, we also understand that the different communities and ethnic groups in Minnesota are more multifaceted and complex than just these two categories. In general, the term “API” is used to include all those who identify as Asian and/or Pacific Islander. Throughout this article we primarily use the term “Asian” when referring to the residents we surveyed, and use the term “API” when referring to broader Asian and Pacific Islander identities and communities.

Volunteers door-knocked in pairs, with each pair consisting of at least one volunteer who is able to speak Hmong or Vietnamese. The data for our door-knocking lists were not disaggregated by Asian ethnicity; however, the Asian residents on the list identified primarily as Hmong or Vietnamese. Volunteers knocked on 394 doors and were able to speak with 74 households. Residents were asked four questions:

One resident described how the police had pointed a gun at his unarmed, elderly, non-English-speaking father’s face in their driveway one night after following him home in his vehicle. Due to the language barrier, his father was unable to understand or comply with the officers’ commands. The police quickly escalated the situation by drawing their firearms when immediate compliance was not shown, despite pleas from the resident explaining that his father did not speak English. Another resident relayed how the police had gone through their purse during a traffic stop without giving them a reason why. Others described how they were accused of having drugs when being pulled over, though without the police having any valid reason for suspicion.

A number of respondents commented that “they try to stay out of the way” or “politely talk to them [the police].” Those who responded “yes” to having experienced police abuse also shared personal experiences about being pulled over frequently, being given tickets with high fines for minor infractions, and cited a lack of reciprocal dialogue by the police when they were retained or pulled over. They stated that the police rarely attempted to understand both sides of the situation, and that they were treated as guilty from the onset of the police interaction.

When residents were asked if they support the Black Lives Matter (BLM) movement, the highest response was “unsure” at 51 percent, with 38 percent answering “yes,” and 10 percent answering “no.” Those who answered “unsure” stated that they were not sure what Black Lives Matter is, or stated that though they agree that black lives do matter, they did not have a full understanding of what the activists were trying to do. Some who answered “yes” said that they support Black Lives Matter and also think that all lives matter. Others said that they respect authority, but think the tapes [of Jamar Clark] should be released and that the killing should not have happened.

In regards to the specifics of Black Lives Matter, though many respondents indicated that they either did not know what Black Lives Matter exactly is or were unsure of its purpose, few residents outright opposed BLM. Some respondents said that they have “seen a little bit about it in the news,” but have not seen in-depth coverage that goes beyond stating that a protest occurred. Non-English speaking residents said that they were unable to access information about BLM or the 4th Precinct Occupation. One resident said that the media had made the protests appear violent even though it was peaceful. For those who answered “unsure” about their opinion of BLM, a common message was that they “support all minorities,” but felt confused about the issues. These responses indicate that the media lacks a clear and accessible dialogue on these topics. 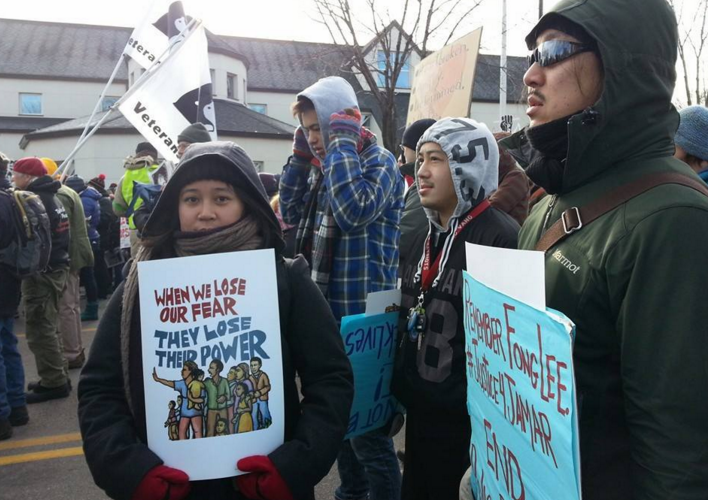 When asked if they were in any way affected by the 18-day 4th Precinct Occupation in North Minneapolis from mid-November to early December of 2015, 72 percent answered “no,” 14 percent answered “unsure,” and 14 percent answered “yes.” The 14 percent who answered “yes” cited traffic delays, a feeling of disruption and helicopter noise. One respondent said they had been affected because they were disturbed that “a young man had been shot by the police” and that they were “supportive of BLM-Mpls finding justice.” Notably, the residents predominantly answered that the protest did not affect them in a negative way, despite media coverage of the occupation that consistently centered narratives framing the protest as a community nuisance.

Lastly, APIs4BlackLives volunteers asked residents what they would do to improve police and community relations. Eighty percent of the residents had suggestions and opinions on this topic. Overwhelmingly, the responses from the door-knocking surveys call for more police transparency and accountability, better training for the police and improved media coverage that represents the viewpoints and needs of communities of color, immigrant communities and under-resourced neighborhoods.

Responses also conveyed a desire for better communication and relationship-building by the police in order to build trust and decrease discrimination and hostility during police interactions. Specifically residents asked for more effort by the police to understand both sides of an issue during an interaction, and more cultural competency training. Racial profiling and being “too quick to shoot” were also cited as problems. Of those asked, 20 percent answered “don’t know” or “unsure” to the question of what could be improved. No respondents stated that there was nothing to improve.

Responses to the door-knocking demonstrate that the majority of Asian residents surveyed in North Minneapolis are engaged with and care about the issues of police conduct and with Black Lives Matter, even if they do not fully understand or agree with the actions of Black Lives Matter activists. The vast majority of Asian residents surveyed also expressed an interest in and a concern for improving police interactions in their community.

Further the door-knocking conversations opened up dialogue about how Jamar Clark and police brutality/abuse/discrimination are relevant to API residents of North Minneapolis and their experiences with the police. Some residents commented on how their elected officials should be doing more to hold the police accountable. Many residents stated that they hold a respect for authority, but also hold the belief that their elected officials should represent them and use their tax dollars effectively for the benefit of their community. Others recalled the killing of Fong Lee by the police in 2006, and connected that incident to Jamar Clark and the need for police accountability. All residents expressed a desire to have further conversations, highlighting the need to create space for further engagement at a community level in an accessible way for all residents, especially those in marginalized groups.

During the door-knocking, volunteers encountered non-English speaking residents who knew nothing about Black Lives Matter, Jamar Clark or the 4th Precinct Occupation happening right in their own neighborhood. In debriefing after the door-knocking, our collective discussed potential reasons why some Asian residents had no knowledge of incidents or events happening in such close proximity to their homes. Some suggested that Asian residents, especially elderly Hmong individuals, do not have access to local news or critical analysis and dialogue around the policy-making that directly affects marginalized communities. Volunteers also cited a lack of ongoing, intentional engagement by elected officials, organizations, and activists with Asian residents, young and old, around social and political issues. These factors especially hinder access and active participation for those people in non-English speaking, elderly, immigrant, and refugee communities.

APIs4BlackLives-MN organized this survey not only to gather Asian perspectives on police abuse and Black Lives Matter, but also to further engage the Asian community in issues of racial and social justice. The stereotyped narrative that portrays Asians as apolitical and safe within invisibility undermines community collaboration in calling for police accountability. We understand that the model minority stereotype acts as a wedge to divide communities of color. We recognize that though Asian and Black communities have different experiences of oppression, we share in common the work of fighting to end police abuse and discrimination.

Strong communities and effective collaboration are grounded in building relationships upon similarities and across differences. These doorknocking conversations highlight the importance of not only statistics, but also personal narratives. Sharing our stories illuminates the interior aspects of data that numbers cannot convey and enables us to connect on a human level. As a coalition, we recognize that much of our work begins with holding these conversations so that we are able to build necessary and powerful connections with each other.

APIs4BlackLives-MN is planning another door-knock in St. Paul this March to continue these conversations. Sign up and volunteer here: http://bit.ly/AsianSTPHopesDreams

For more information and/or to become involved with APIs4BlackLivesMN find us on our Facebook page: APIforBlackLivesMattersMN or email us at: api4blacklivesmn@gmail.com